Analysis: Iran’s leaders are safe but protests raise the stakes over imposing veil 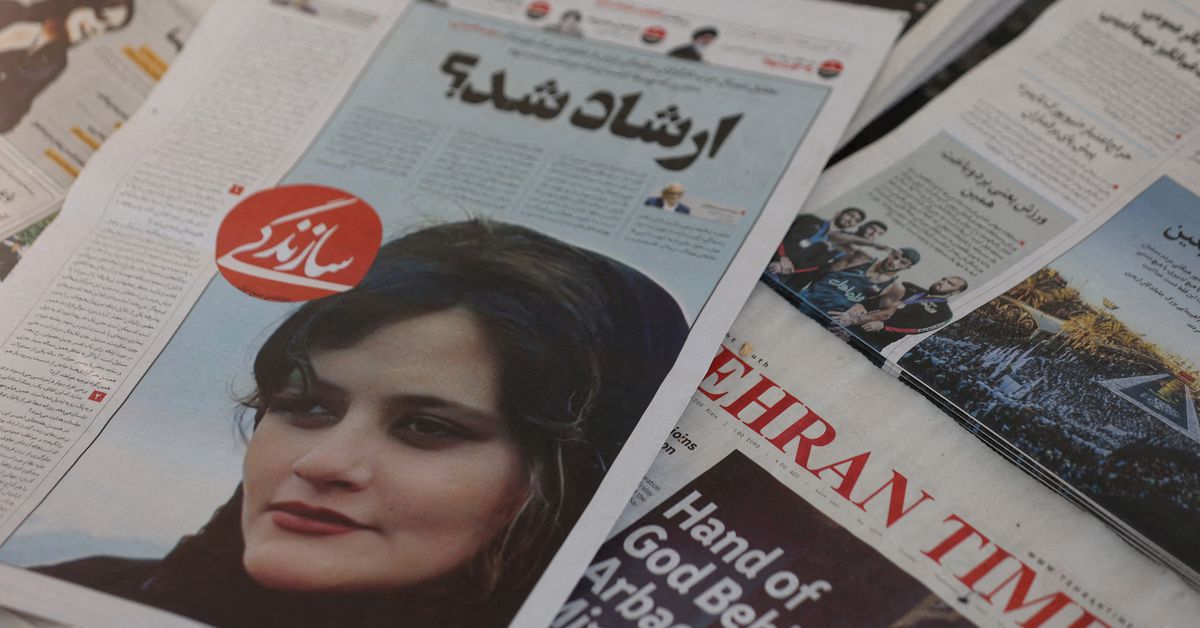 DUBAI, Sept 23 (Reuters) – The popular revolt in Iran triggered by the death of a woman held by police is unlikely to pose an immediate threat to clerical rulers whose elite security forces have crushed one protest after another in recent years.

But the unrest is another crack in the structure of the Islamic Republic, which is seasoned at handling unrest over economic hardships and price rises but not the mass of women leading the biggest demonstrations since 2019.

Enraged by the death last week of Mahsa Amini, 22, who was arrested by morality police for wearing “unsuitable attire”, women challenged the country’s Islamic dress code and took charge, waving and burning their veils. Some publicly cut their hair as furious crowds called for the fall of Supreme Leader Ayatollah Ali Khamenei.

As the government weighs its options, Amini’s case has touched a raw nerve and unleashed years of pent up anger over the mandatory hijab.

Her death will embolden more and more women to challenge the government over dress restrictions even if the protests which spread to most of Iran’s 31 provinces fade or are stamped out, analysts say.

“The death of Mahsa Amiri released decades of suppressed energy and will among women to fight back. It’s not the first time, but this time is different,” said Omid Memarian, an Iran analyst based in the United States.

Memarian said the authorities might eventually show flexibility over the issue.

“The Iranian government might never accept if you ask for a referendum on Iran’s constitution. But the forced hijab has the potential to be removed.”

Under Iran’s Islamic Sharia law, imposed after the 1979 revolution, women are obliged to cover their hair and wear long, loose-fitting clothes to conceal their figures. Violators face public rebuke, fines or arrest.

But decades after the revolution, clerical rulers still struggle to enforce the law, with many women of all ages and backgrounds wearing tight-fitting, thigh-length coats and brightly coloured scarves pushed back to expose plenty of hair.

While that defiance is common, the shock over Amini’s death and nationwide protests have raised the stakes as Iranian women call for more freedoms.

Waves of the hijab protests have hit the clerical establishment in the past years. In 2014, rights activist Masih Alinejad started a Facebook campaign “My Stealthy Freedom”, where she shared pictures of unveiled Iranian women sent to her.

“Now that protesters are clearly taking to the streets to protest Mahsa (Jina) Amini’s murder and demanding change, it is beyond debate that ultimately people seek the change of the system and want human rights and representative government,” said Gissou Nia, director of the Strategic Litigation Project at the Atlantic Council.

So far Iran’s Revolutionary Guards and Basij militia have been relatively restrained but could be mobilised quickly.

“The Revolutionary Guards and Basij are brutal, loyal, and ultimately effective at suppressing protest — and they have significant experience over the years in doing so,” said Eurasia Group analyst Henry Rome.

“The protests pose less of a risk to immediate government stability than to its legitimacy and sustainability over the longer term.”

Iran was rocked by unrest in 2017 and 2018. In 2019, Iran said 200,000 people took part in what may have been the biggest anti-government demonstration in the 40-year history of the Islamic Republic. Reuters reported 1,500 were killed by security forces.

Meir Javedanfar, who teaches Iranian politics at Reichman University in Israel, described the latest protests as a milestone for Iranians angered by “a corrupt and incompetent regime”.

“These protests will not be the last. We will see more. But we are unlikely to see a revolution until and unless there is a leader and at least part of Iran’s armed forces starts siding with the people against the regime. None of this has happened yet,” he said.