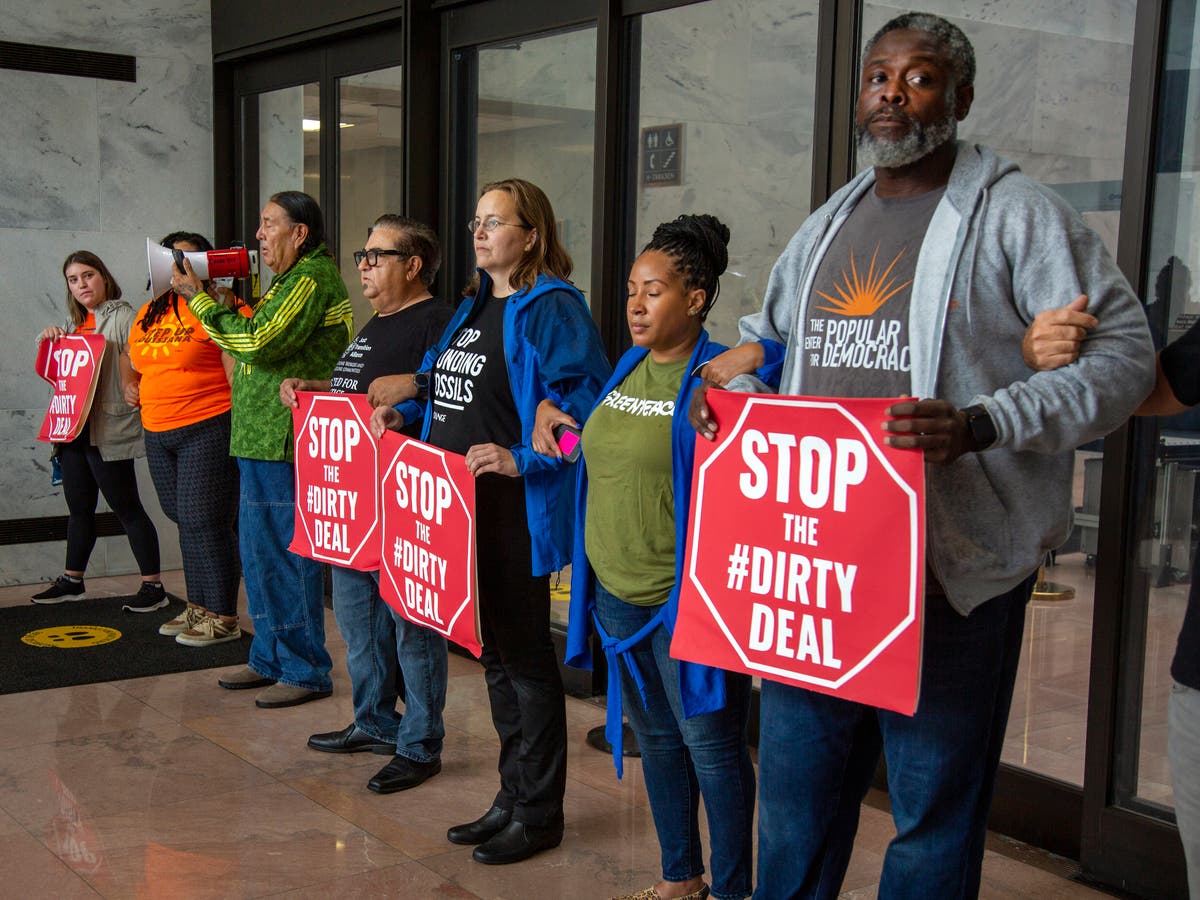 A group of climate leaders were arrested on Thursday on Capitol Hill in Washington, DC in protest of a new bill from Senator Joe Manchin designed to speed up approvals for energy projects, including fossil fuel projects.

The bill was part of a deal between Mr Manchin, Democrat of West Virginia, and Senate Majority Leader Chuck Schumer to pass the Inflation Reduction Act this summer, which contained billions in spending to address the climate crisis.

But some environmental groups and left-wing members of the party have criticized aspects of the new bill for its support of future fossil fuel projects.

“Sen. Manchin’s proposal is a fossil-fueled travesty, and those who stand with it are setting their climate credibility on fire,” Kierán Suckling, who heads the non-profit Center for Biological Diversity, said in a press statement on Thursday’s protest.

Mr Suckling was among the leaders at the protest on Thursday, and video footage showed him being led away by police officers.

The Capitol Police told The Independent via email that 11 people were arrested at the entrance to the Hart Senate Office Building after being told to leave.

The bill text, which was released to the public yesterday, contains several provisions designed to support energy and electricity projects, including statutes of limitations on court challenges and requirements that the President prioritise reviews of some projects.

Some of these measures could spur faster deployment of infrastructure for clean energy projects like wind farms and power lines. But the bill would also likely speed up oil and gas projects.

One of the most controversial parts of the bill is its support for the Mountain Valley Pipeline, an unfinished natural gas line running from West Virginia to Virginia that has been tied in up court reviews.

The new bill – titled the “Energy Independence and Security Act of 2022” – would require the federal government to issue all permits for the project.

“This is not permitting reform,” Ebony Twilley Martin, one of the heads of the non-profit Greenpeace USA and another one of the activists arrested at today’s protest, said in the groups’ statement.

“This is a giveaway that benefits the oil and gas industry that lines its pockets at the expense of those affected by ongoing climate disasters and extreme weather.”

On Wednesday, in a statement responding to the bill’s release, White House Press Secretary Karine Jean-Pierre affirmed the President’s support for the legislation.

“Today, far too many energy projects face delays — keeping us from generating and shipping critical, cost-saving clean energy to families and businesses across America,” she said.

Democratic leadership has planned to include the bill as part of an upcoming budget bill needed to keep the government funded. But this approach, as well as some of the bill’s text, has been criticized by some lawmakers in the party.

“We remain deeply concerned that these serious and detrimental permitting provisions will significantly and disproportionately impact low-income communities, indigenous communities, and communities of color,” read a letter signed by dozens of House Democrats written earlier this month, urging House Speaker Nancy Pelosi and Majority Leader Steny Hoyer to keep this text out of the budget resolution.

And the bill may have trouble getting a filibuster-proof majority in the Senate. On Wednesday, Senator Tim Kaine, a Virginia Democrat, put out a statement strongly opposing the bill’s provisions on the Mountain Valley Pipeline, much of which would run through his state.

Senator Bernie Sanders of Vermont, an independent who caucuses with the Democrats, said earlier this month that he would not support the bill.

The bill will thus need some Republican support to pass with a filibuster-proof majority of 60 votes, in a Senate evenly divided 50-50 between each party.

Yet, although some Senate Republicans have revealed their own permitting bill in recent weeks, the GOP appears to be mainly opposed to Mr Manchin’s new proposal, reports The Hill.

If the new legislation does end up being attached to the budget bill, the combined opposition from some Republicans and some Democrats could set up concerns over a government shutdown, should the budget resolution not pass.

US home prices fall for the first time in a decade