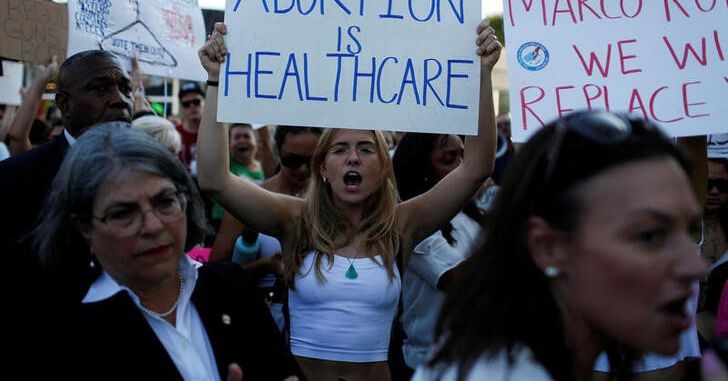 July 5 (Reuters) – Florida’s ban on abortions past 15 weeks of pregnancy is now in effect after a court order blocking its enforcement was put on hold on Tuesday, and a Mississippi judge declined to prevent a near-total ban from being implemented later this week.

In Florida, soon after Circuit Court Judge John Cooper finalized an expected order blocking enforcement of a 15-week ban that took effect on Friday, the Republican-led state promptly appealed, triggering an automatic freeze of his injunction.

Hours later, Judge Debbra Halford in Jackson, Mississippi denied a request by the state’s only abortion clinic to prevent officials from carrying out a near-total ban on abortion that is set to take effect on Thursday.

The clinic, Jackson Women’s Health Organization, in challenging the law and a separate six-week ban, cited a 1998 ruling by the Mississippi Supreme Court holding that the right to privacy under the state’s constitution included a right to abortion.

But Halford said it was “more than doubtful” the state’s high court would continue to uphold that decision as it rested on the U.S. Supreme Court’s own past rulings including Roe v. Wade.

Rob McDuff, a lawyer for the Mississippi clinic, called the ruling disappointing and said they were considering their options.

Mississippi is one of 13 states with “trigger” laws designed to ban or restrict abortions once the Supreme Court overturned Roe v. Wade, as it did June 24 in a case upholding a different Mississippi law barring abortions after 15 weeks of pregnancy.

Appeals in both cases are expected, with lawyers for the abortion providers in Florida at the ACLU and Center for Reproductive Rights already vowing to seek reinstatement of the injunction and to get the 15-week ban “blocked for good.”

Florida has long been a destination for women across the Southeast seeking to end pregnancies in their second trimester as neighboring states have strict abortion limits. Previously, Florida permitted abortion up to 24 weeks.

The conservative majority U.S. Supreme Court’s decision gave states permission to ban abortion and nearly two dozen Republican-led states are now trying to do so, or have done so already.

The decision has ignited a wave of litigation by clinics in various states aimed at preserving the ability of women to obtain abortions based on protections in state rather than federal constitutions, as well as nationwide protests.

While judges in Kentucky, Louisiana and Utah have temporarily blocked bans from taking effect, the state high court in Texas on Friday allowed a pre-Roe ban to be civilly enforced and Ohio’s top court declined to block a six-week ban.

Nate Raymond reports on the federal judiciary and litigation. He can be reached at nate.raymond@thomsonreuters.com.