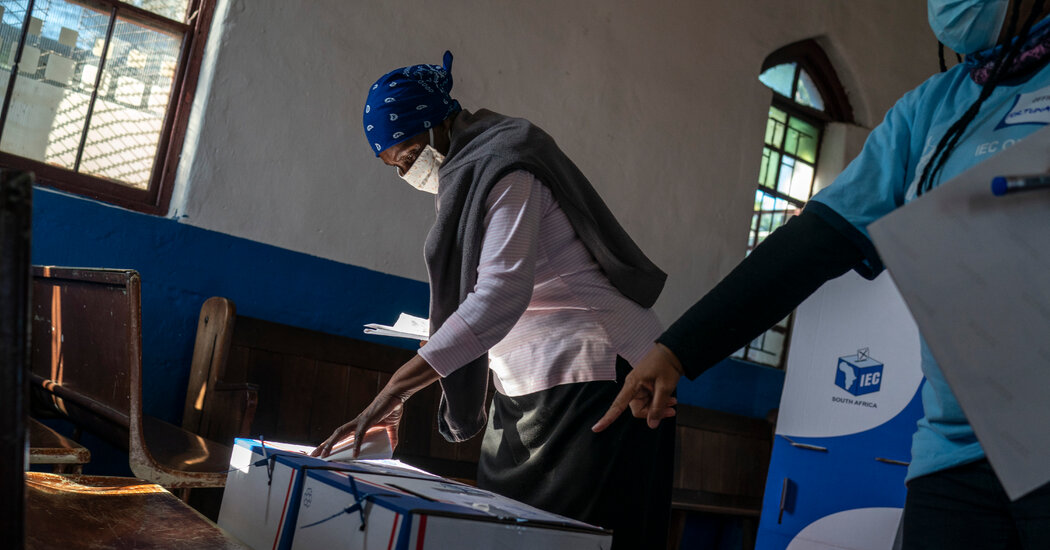 JOHANNESBURG — The African National Congress, South Africa’s once-vaunted liberation movement, suffered its worst election showing since coming to power in 1994, according to the results of municipal elections released Thursday.

Facing widespread anger over corruption and collapsing services, the party won less than 50 percent of the vote nationally on Monday, the first time in its history that it has failed to cross that threshold.

Voters went to the polls on Monday to choose councilors and mayors to govern towns and cities, but they used the opportunity to vent their grievances over national issues, including record unemployment and anger over the handling of Covid. The result was a resounding rebuke for the A.N.C., particularly in urban areas. Significantly low voter turnout was a further indictment of the A.N.C. and of the main opposition parties, with voters choosing smaller, identity-driven parties.

After municipal setbacks in 2016, A.N.C. leaders promised to “learn from our mistakes,” and they staked their hopes this year on polling that found President Cyril Ramaphosa with a higher approval rating than that of his party.

But however warmly South Africans may feel toward their president, they see a disconnect between his message of national renewal and the corruption that has sullied his party and crippled municipalities.

“They listen to him, they like him,” said Mcebisi Ndletyana, a political scientist at the University of Johannesburg. “But when they lower their eyes to the local leaders that are there, they see mediocrity.”

Not since the 1990s, when Nelson Mandela was the face of the party, has the A.N.C. so heavily relied on the personality of its leader in a local election, said William Gumede, chair of the Democracy Works Foundation. It was not enough to convince voters, but the A.N.C. may have dipped below 40 percent if Mr. Ramaphosa were not at the center of the campaign, Mr. Gumede said.

In the aftermath of the embarrassing showing this week, Mr. Ramaphosa is likely to face leadership challenges from within his party. To replace him, his opponents will have to find a unifying candidate. Mr. Ramaphosa, in turn, may have to fire tainted but popular leaders, Mr. Gumede said.

This fallout could lead to a split in the ruling party but prove to be good for South African voters.

“It’s really energized the country again. There was a sense of despair in hopelessness in the country because the A.N.C. was this dominant force,” Mr. Gumede said.

Even with its losses Monday, the A.N.C. remains South Africa’s dominant party, having secured 46 percent of the vote.

But the modest victory means it will now be forced to enter coalitions with smaller parties in cities it once comfortably controlled. It will also have to pursue political compromises in Gauteng Province, home to the economic capital, Johannesburg, and Pretoria, the seat of government.

A.N.C. officials tried to cast the results in the best light.

“We’re not a loser here,” Jessie Duarte, the party’s deputy secretary general, said at a news briefing on the floor of the results center in Pretoria. “As far as we’re concerned, we are the winning party on that board.”

But Ms. Duarte acknowledged that voters had sent a message.

“We do not disrespect the electorate,” she said. “They’ve spoken.” She said the party would be “pragmatic” in analyzing its losses.

Yet it was not simply the losses that unsettled A.N.C. leaders. Many South Africans appeared to be sending a message by not casting ballots at all. Voter turnout was 47 percent, an 11 percentage point drop from the last election.

While political parties sought to blame the low turnout on a campaign season compressed by Covid-19 regulations and poor weather in some parts of the country, many observers attributed it to a dispiriting political landscape. Inaction at the polls, one analyst suggested, was a form of action.

“We need to start analyzing and speaking about not voting as a political activity in itself,” said Tasneem Essop, a researcher at the Society, Work and Politics Institute at the University of the Witwatersrand.

Lungisile Dlamini, a 28-year-old schoolteacher who lives in Johannesburg’s Alexandra township, was among those South Africans who did not go to the polls.

“I didn’t see the need,” she said. “They’re not doing anything, so what’s the point of voting?”

Daniel Vinokur, 27, worked as an auditor during the ballot count — but none of the ballots counted was his, he said.

“I just don’t have a political party I identify with,” he said.

Many of those who did vote said they were motivated by national issues, like South Africa’s stagnant economy and record unemployment, which have been made worse by the Covid-19 pandemic and the resulting lockdown measures.

“I’m thinking about the youth,” said Bongile Gramany, a 62-year-old A.N.C. supporter who voted at a church in Alexandra township. “If they can help the youth to get jobs, to get skills, I’ll be happy.”

Like many of the party’s backers, Ms. Gramany pointed to the A.N.C.’s governing experience and said she believed that “they can change.”

The party still plays an outsize role in South Africa’s political landscape and in voters’ psyches, said Ms. Essop, the political analyst. For some South Africans, the decision not to vote, or to vote for a smaller party, may have partly been meant to punish a party that has fallen short of the ideals of Mandela, its famed leader, she said.

Still, despite a record 95,427 candidates running for 10,468 council seats, the main opposition parties struggled for traction. The Democratic Alliance, which is the leading opposition, failed to make gains, instead, losing support by 5 percentage points since 2016.

Opposition parties that did attract voters drew on issues of identity in communities where people felt let down by the governing party.

In KwaZulu-Natal Province, once an A.N.C. stronghold, the Inkatha Freedom Party leaned on a history of Zulu nationalism to help it win nearly a quarter of the vote in the largely rural province.

Similarly, the Freedom Front Plus, a historically Afrikaner nationalist party that repositioned itself as a bulwark for all minorities against the A.N.C., increased its support across the country.

These gains may be a sign that South African voters are shifting to the political right. Instead of the “big ideologies” of left-wing parties, said Susan Booysen, head of research at the Mapungubwe Institute for Strategic Reflection in Johannesburg, some voters may want parties and civic organizations they believe “can get things done.”

“I think it is relatively easy for a community to turn to that direction,” she said, “when they are exposed to such harsh conditions, and when national government does not lend a helping hand.”