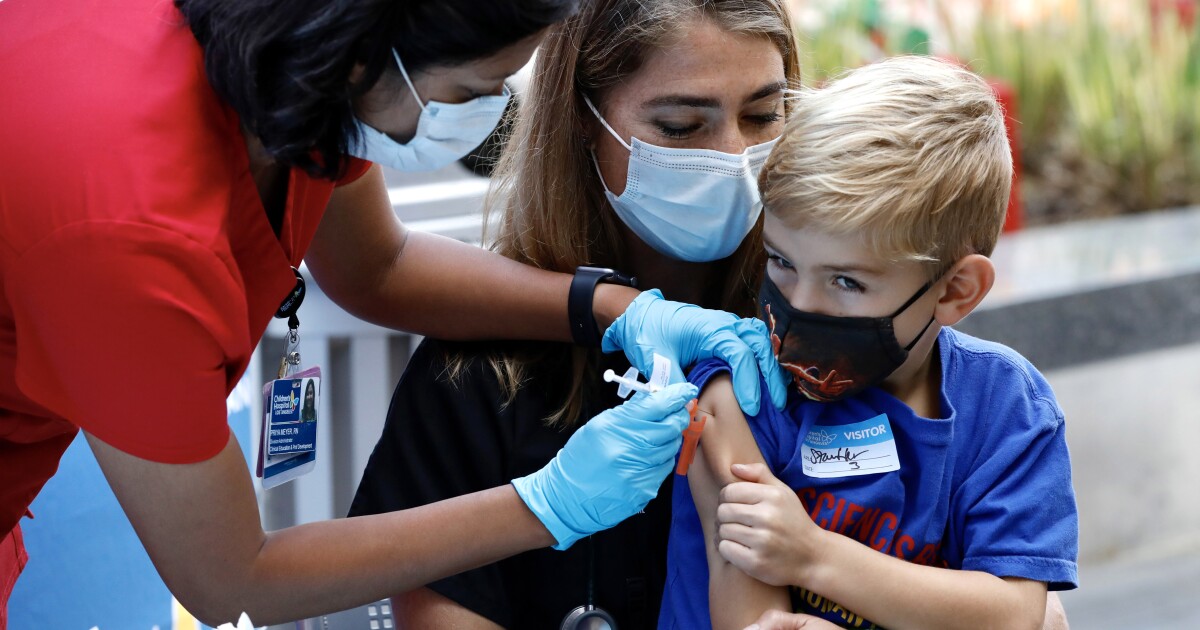 The first COVID-19 vaccinations have been given to children ages 5 to 11 Wednesday as health officials launched an ambitious rollout to offer shots to 3.5 million kids in California.

The Western States Scientific Safety Review Workgroup, a coalition of public health experts from California, Nevada, Oregon and Washington, gave its green light to the vaccine Wednesday morning, formally clearing the way for vaccinations to be distributed in California. The move came after the U.S. Centers for Disease Control and Prevention recommended late Tuesday that more than 28 million children nationwide in that age group get the shots.

“This expanded eligibility for lifesaving vaccines moves us closer to ending the pandemic,” Gov. Gavin Newsom said in a statement.

By midday, vaccinations were already going into the arms of 5- to 11-year-olds in Los Angeles County, and the L,A. County Department of Public Health website vaccinatelacounty.com was listing clinics offering the Pfizer-BioNTech shots for young children.

Vaccinations also will be available at pediatricians’ offices.

It may, however, take some time before clinics ramp up to full capacity.

President Biden said in a statement that the government has secured enough vaccine supply “for every child in America.”

“It will allow parents to end months of anxious worrying about their kids and reduce the extent to which children spread the virus to others,” Biden said. “It is a major step forward for our nation in our fight to defeat the virus.”

For the first week of the rollout, Ferrer suggested that parents and guardians call ahead to make sure the location is stocked with kid-size doses. There was at least one parent who arrived Wednesday morning at an L.A. County clinic only to be told the doses weren’t available yet.

The vaccines for this age group are specially formulated and come in vials with an orange cap, with a dosage one-third the size of those given to people 12 and older. The dose for older recipients comes in a different vial, with a purple cap, and is not appropriate for younger children.

In L.A. County, an estimated 900,000 children are newly eligible for the vaccine. The county expects to get nearly 300,000 doses in shipments over the next 10 days, and eventually, there will be 900 sites countywide offering the shots to this age group.

The vaccinations are administered in a set of two doses, to be given three weeks apart. People are considered fully protected two weeks after their final dose, meaning children who begin their vaccination series by mid-November will be fully protected by Christmas.

The vaccinations are free, and recipients do not need to be U.S. citizens or have health insurance.

A clinical trial of the vaccine showed an efficacy rate of nearly 91% in preventing symptomatic COVID-19 cases in children 5 to 11 who were not previously infected.

Children nationwide were at higher risk for hospitalization during the latest surge. Over a six-week period that ended in mid-August, COVID-19 hospitalizations among children and adolescents increased fivefold, the director of the U.S. Centers for Disease Control and Prevention, Dr. Rochelle Walensky, said at a briefing Wednesday.

New research now indicates that children and adults are equally vulnerable to coronavirus infections, Dr. Anthony Fauci, the U.S. government’s top infectious disease expert, said Wednesday. Children who are infected are still less likely to become visibly sick than adults; half of children 5 to 11 who are infected may show no symptoms.

Walensky urged parents to seek vaccinations even for children who have previous documented coronavirus infections.

A study published by the CDC found that unvaccinated adults who survived an infection were five times more likely to get reinfected than fully vaccinated people were to suffer a breakthrough infection.

Getting kids vaccinated “is monumental” in the course of this pandemic, Walensky said recently. Even though COVID-19 is less likely to cause death in young children than in adults, it has been much deadlier than other diseases for which there are vaccines.

For instance, in the five years before the chickenpox vaccine was recommended for children, that virus caused an average of 16 deaths a year in 5- to 9-year-olds. By contrast, in the 12 months ending Oct. 2, 66 children ages 5 to 11 died from COVID-19.

That death rate made COVID-19 the eighth-leading cause of death among children in that age range.

Children who get infected with the coronavirus also have a rare risk of developing a serious condition that usually requires hospitalization. The condition — multisystem inflammatory syndrome in children, or MIS-C — causes body parts become inflamed, including the heart, lungs, kidneys, brain, skin, eyes and or gastrointestinal organs.

The median age of those who become ill with MIS-C in California is 8.

“Fortunately, these most severe outcomes are generally rare. The chance a child will have severe COVID, require hospitalization or develop a long-term complication like MIS-C remains low,” Walensky said. “But still, the risk is too high and too devastating to our children, and far higher than for many other diseases for which we vaccinate children.”

Besides the clinical effects on children, Walensky said vaccines have the power to alleviate other debilitating affects from the pandemic, including to their social and mental health.

“For almost two full years, school has been fundamentally changed. There are children in the second grade who have never experienced a normal school year,” she said.

“We have watched as the education gap that exists in this country has widened as this virus has disproportionately impacted racial and ethnic minority communities. Pediatric vaccinations have the power to help us change all of that and to move us toward schools as we once knew it, and hope it can be — as safe and enriching environments for all of our children.”

Health officials in California remain concerned over the possibility that there could be a fifth wave of the pandemic as colder weather sets in and people spend more time indoors. Vaccination levels in California, while relatively high compared to other states, are still too low to prevent a substantial risk of transmission.

Nationally, more than 8,300 children 5 to 11 have been hospitalized for COVID-19, including nearly 400 in Los Angeles County. Nearly 100 children in this age group have died from COVID-19 across the country, including one in L.A. County.

One in three children who have been hospitalized for COVID-19 nationally have required intensive care. More than 4% of COVID-19 patients 5 to 17 later reported symptoms that lasted a month or more, known as long COVID, according to one study.

As the Delta variant surge swept through California this summer, younger children became the group with the highest weekly coronavirus case rate in L.A. County, largely because vaccines were not available to them, Ferrer said.

While health officials strongly encourage children to receive the shots, there is one significant post-vaccination side effect that officials have been monitoring, especially among boys 12 and older: myocarditis, an inflammation of the heart.

There have been rare instances of the condition following vaccination, notably among teenagers and young men. As of Oct. 27, there have been about 1,000 confirmed cases of this condition among people 30 and younger who received a COVID-19 vaccine, according to the CDC.

Even when post-vaccination myocarditis does happen, data suggest it appears to be far more benign than other forms of myocarditis and goes away quickly with rest, UC San Francisco epidemiologist and pediatrician Dr. George Rutherford said in an interview.

There have been no confirmed reports of post-vaccination myocarditis as a cause of death among cases that have been fully evaluated, Dr. Matthew Oster, a pediatric cardiologist of Children’s Healthcare of Atlanta who advised a CDC advisory committee, said before the panel voted 14–0 to recommend the agency endorse the shot for children.

There have been promising results from a study following up on long-term effects from post-vaccination myocarditis. Of about 47 patients, 91% were considered by their physician to be either fully or probably fully recovered, Oster said at Tuesday’s committee meeting.

A clinical trial for children 5 to 11 showed no post-vaccination cases of myocarditis. But because the trial is, by definition, relatively small, officials will continue to monitor for reports of post-vaccination side effects as shots are rolled out.

Based on what’s known, Oster said he suspects that post-vaccination myocarditis will end up being even less likely among 5-to-11-year-olds than it is for teens and young adults.

Oster said he is asked by parents of children with congenital heart disease whether those kids should get the vaccine. He recommends they do because the children would be at far higher risk of severe illness should they contract COVID-19.

Available data has shown that there is no increased risk for post-vaccination myocarditis in people with preexisting heart conditions; by contrast, children with congenital heart disease who have severe COVID-19 are more likely to need intensive care, Oster said.

“The bottom line is: Getting COVID, I think, is much riskier to the heart than getting this vaccine,” he said.

FBI floats a working theory on the ‘jet pack man’ flying above L.A.