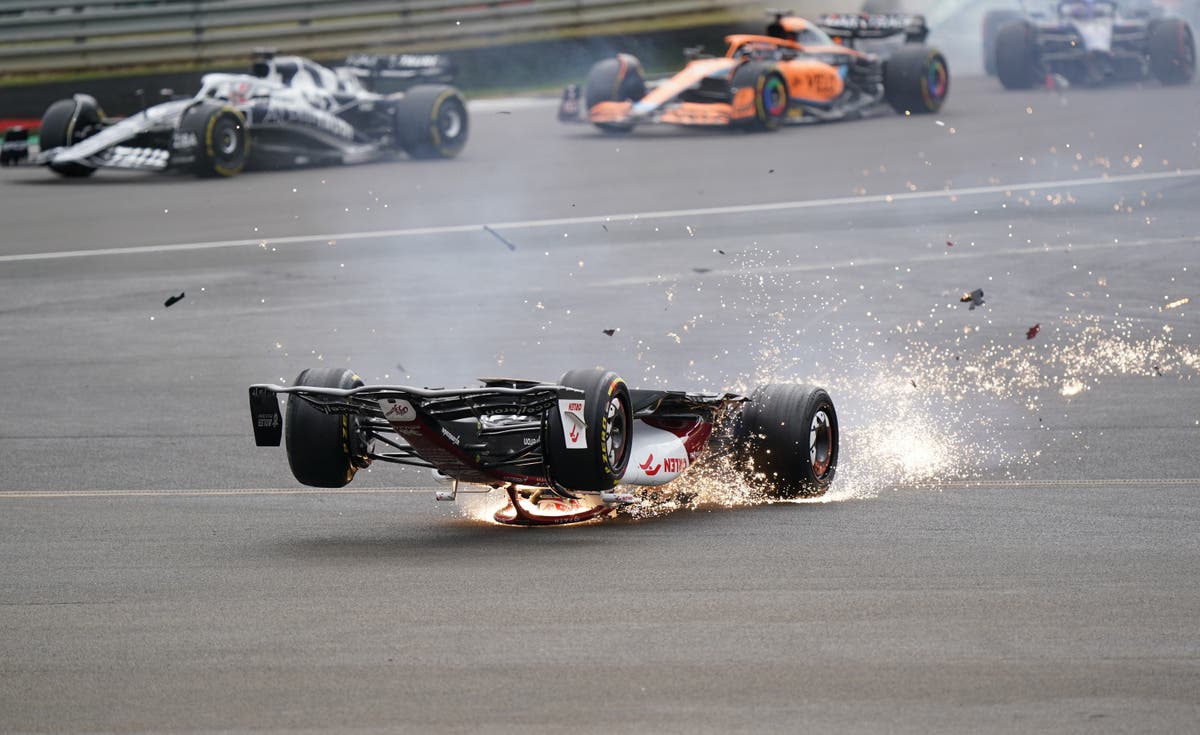 Alfa Romeo driver Zhou Guanyu survived an extraordinary opening-lap crash at the British Grand Prix after his car flipped upside down and slammed into the catch fencing in front of thousands of shocked fans.

The Formula One rookie was approaching the 160mph opening Abbey corner when British driver George Russell tagged the right rear of Zhou’s machine, sending him on to his roof and sliding out of control.

Upside down, Zhou continued through the gravel before he slammed into the tyre barrier and was launched into the fencing.

Zhou’s Alfa Romeo was lodged on its side, between the tyre wall and the fencing, with nearby fans and photographers ducking for cover following the impact.

An extraction team rushed to Zhou and the 23-year-old Chinese driver, in just his 10th race, was carefully removed and taken away in an ambulance to the medical centre.

Russell was also seen dashing to check on his friend, the Williams driver Alex Albon who was also caught up in the accident, and then Zhou’s condition.

The Mercedes driver, who was not permitted to restart the race, added: “I jumped out of the car to see that Zhou was ok. When got back to car I couldn’t restart it. As soon as you get outside assistance you cannot restart the race.”

Yuki Tsunoda and Esteban Ocon were also involved in the frenetic first moments of Sunday’s race, with both drivers limping back to the pits for repairs and able to take part in the restart.

A radio message to Zhou’s team-mate Valtteri Bottas said: “Zhou is conscious. He is talking. There are no fractures and, considering the circumstances, he is pretty good, pretty well.”

Zhou remains at the on-track medical centre for observations, while London-born Albon has been transferred to hospital.

An FIA spokesperson said: “Two drivers involved in the incident at the start of the race were checked in the medical centre. There were no major injuries.

“The driver of car 63 (Russell) was checked by medical staff and was declared fit.”

The race was immediately red-flagged, but as the cars made their way back to the pits, five protestors stormed the circuit at the 200mph Wellington Straight before sitting down.

The protestors were dragged away by marshals as a number of drivers sped by.

An FIA spokesperson said: “We confirm that after the red flag, several people attempted to enter the track. These people were immediately removed and the matter is now being dealt with by the local authorities.”

Following a delay of 53 minutes the race restarted.

Northamptonshire Police said they had made a number of arrests.

They said on Twitter: “We can confirm that after the red flag, a number of people entered the track.

“All have been removed safely and a number of arrests have been made.

“We continue to ask people to be extra vigilant and report anything suspicious to us.”