When the Soccer Is Just a Story Line 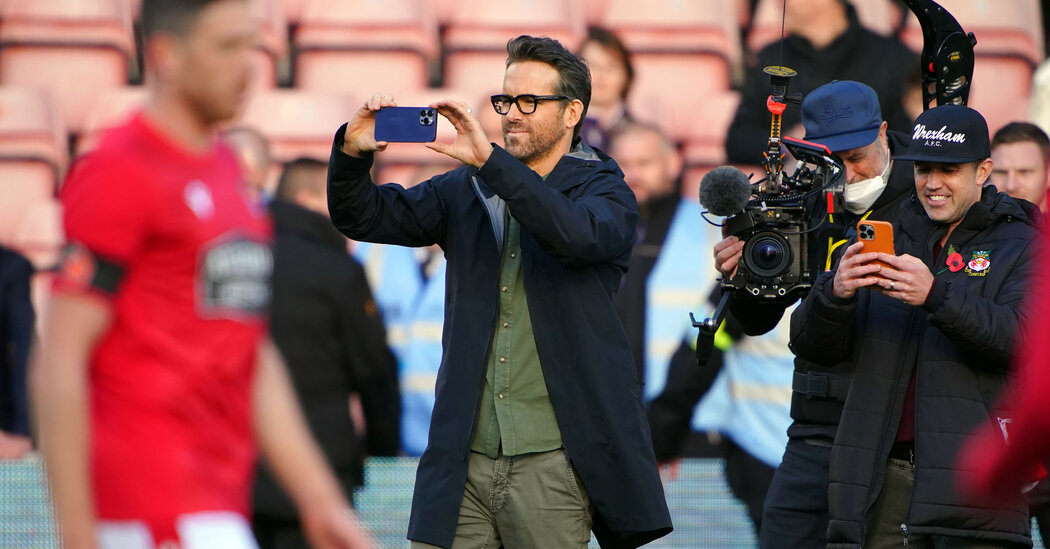 LONDON — The cameras were rolling even before the actors Ryan Reynolds and Rob McElhenney could be sure there would be anything to film.

Last November, Reynolds and McElhenney were waiting anxiously to discover if their bid to buy Wrexham, a Welsh club marooned in the fifth tier of English soccer, would survive a vote from the Supporters’ Trust, the fans’ group that had rescued the team from bankruptcy and run it on a threadbare budget for years.

The actors had reason to be confident: When they had presented their ideas to the Trust in a video call, the reaction had been positive. Still, as they waited for the call that would inform them of the result of the vote, they did not know if it would be good or bad news, and that put them in something of a bind.

McElhenney had concocted the idea of buying a soccer team after inhaling both seasons of “Sunderland ’Til I Die,” the successful Netflix series that detailed the fleeting ups and frequent downs of another faded club rooted in postindustrial Britain. “He told me: ‘We should do this. We should buy a club and make a documentary,’” said Humphrey Ker, one of McElhenney’s writers and the person who had recommended the Sunderland series to him.

If the Wrexham trust rejected the actors’ ownership bid, their plan would be up in smoke; after all, with no club, there would be no documentary. But for the documentary to work, it had to follow their adventure in soccer from the very start. So as they waited for the phone to ring, McElhenney and Reynolds had to decide, effectively, which came first: the content or the club?

Wrexham is not the only place wrestling with that question. Soccer has long provided fertile ground for film and television, but the rise of streaming platforms — with their insatiable appetites and generous wallets and breakthrough series involving entirely fictional teams — has triggered a deluge of productions.

Some, like Amazon’s “All or Nothing” documentary series, have tried to draw on the inbuilt appeal of some of the world’s biggest clubs, embedding multiple camera crews over the course of a season with teams like Manchester City, Tottenham and Juventus.

Others have eschewed the editorial control — and considerable fees — the game’s superpowers demand in favor of a more authentic aesthetic embodied by “Sunderland ’Til I Die,” in which the club is less the subject of the documentary and more a backdrop against which a human story plays out.

But there is one crucial difference between many of those projects and their forerunner. In Sunderland, the producers were mere observers of the club. At Wrexham, and elsewhere, they are something more: They are actors in the drama.

“Soccer clubs are the best content investments in the world,” said Matt Rizzetta, the chairman of the creative agency North Six Group and, since 2020, the principal owner of Campobasso, a team in Italy’s third tier. “They stand for a set of values, and they automatically connect with people in a way that almost nothing else can match.”

Rizzetta said his decision to invest in soccer was driven by his heart — it was a “lifelong dream” to own a team, he said, particularly one based close to the part of Italy where his grandparents had grown up — but his thinking behind buying Campobasso, in particular, was governed by his head.

“We looked at around 20 teams, all in that area,” he said. Campobasso stood out. It had once reached the second division, but had found far more snakes than ladders in recent years. It is based in Molise, a region that often complains it is overlooked by the rest of the country: Molise Non Esiste, as the self-deprecating local slogan puts it: Molise doesn’t exist.

That suited Rizzetta perfectly. His strategy was centered on “content, storytelling, marketing and media,” he said. “Being a club owner now is different to the 1980s and 1990s. Provincial teams, in particular, need new revenue streams to reinvest in the product, and content is one of the most underutilized channels.”

To remedy that, Rizzetta’s North Six Group signed a deal with Italian Football TV, a YouTube channel, for a documentary series that would follow Campobasso on its (eventually successful) attempt at winning its first promotion in decades.

“It was a story that needed to be told, this team from a part of the country that has been forgotten,” Rizzetta said. That obscurity, to some extent, helped make the project viable. “It was a small, sleepy club,” he said. “It had the feel of a start-up. We kind of had a blank slate. There was nothing we could do that would be wrong.”

Not every group of supporters, though, welcomes that kind of approach. This summer, it was announced that Peter Crouch, the former England striker, would be joining the board of Dulwich Hamlet, a team based in a well-heeled enclave in south London where he made a handful of appearances in the early stages of his career.

The move was not motivated purely by altruism: Crouch’s experiences, it emerged a few days later, would form the basis of a documentary bankrolled by Discovery+. According to several people involved with the project, the network had explicitly conceived the idea as a chance to create its own version of “Sunderland ’Til I Die.”

The idea has “received a mixed response,” said Alex Crane, a former chairman of the Dulwich Hamlet Supporters’ Trust. “Some fans are genuinely excited,” Crane wrote in a WhatsApp message. “Others are very skeptical, and are querying what the club gets out of it.”

Certainly, the apparent theme of the documentary — that Dulwich faces a “bleak future” and Crouch has parachuted in to save it — has not been universally accepted. The Brixton Buzz, a community news outlet, suggested, with some profanity, that the “TV narrative” had been concocted purely for the sake of the series.

That trap — contorting themselves to become a more marketable pitch — is one Rizzetta is adamant clubs must avoid. In September, North Six Group added Ascoli — in Italy’s second division — to its stable of teams. It appealed to the club’s former owner, Rizzetta said, as a “strategic operator” that could reproduce its Campobasso success on a larger scale. Among the first things the new owners did was sign an exclusive deal with Italian Football TV.

“Content is still a big part of our strategy,” Rizzetta said. “But it will have to be done in a different way. Ascoli has a different message, brand and story. It is sacred to its community.”

Reynolds and McElhenney have been equally explicit about their plans. “The documentary is a huge part” of the project, McElhenney said on the actors’ first visit to Wrexham in October. “We feel that is the best way to really do a deep dive into the community. You can televise the games, but if you’re not following the story of the players and the story of the community, ultimately nobody is really going to care.”

Wrexham is already feeling the benefits of its sprinkling of Hollywood stardust. A raft of impressive signings arrived over the summer to strengthen the team. There has been investment, too, in the club’s infrastructure.

“The stadium is being remodeled,” said Spencer Harris, a club director before the takeover. “The first team’s training facility is much better. The club are building for long-term success. It feels sustainable.”

Some of that new money has come from ticket sales — crowds are up this season — and some from a spike in the sale of replica jerseys. By October, Wrexham had sold more than 8,000 — almost as many as it would ordinarily ship in a good year — with the Christmas rush still to come.

But perhaps most significantly — and lucratively — the jerseys themselves are a little different. The away shirt is green and gray, McElhenney’s tribute to his hometown Philadelphia Eagles. Ifor Williams Trailers, formerly the club’s principal sponsor, has been replaced by the more recognizable insignia of TikTok. Expedia’s logo stretches across the shoulders.

Though the team’s first game of the season was televised nationally in Britain, it is not the audiences that tune in to BT Sport to watch the National League that coaxed brands of that stature to invest in Wrexham. Far more appealing was the prospect of being front and center on prime-time television.

In May, Reynolds and McElhenney announced — in the wry style that has characterized their ownership so far — that they had sold two seasons of their documentary, “Welcome to Wrexham,” to FX. It will include the moment they received the call to confirm that their bid to buy the club had been approved by the fans. It was all captured on film. The content, it turned out, was inseparable from the club.