West Ham vs Genk result: Said Benrahma hits brace but Hammers pegged back by late own goal in Europa League 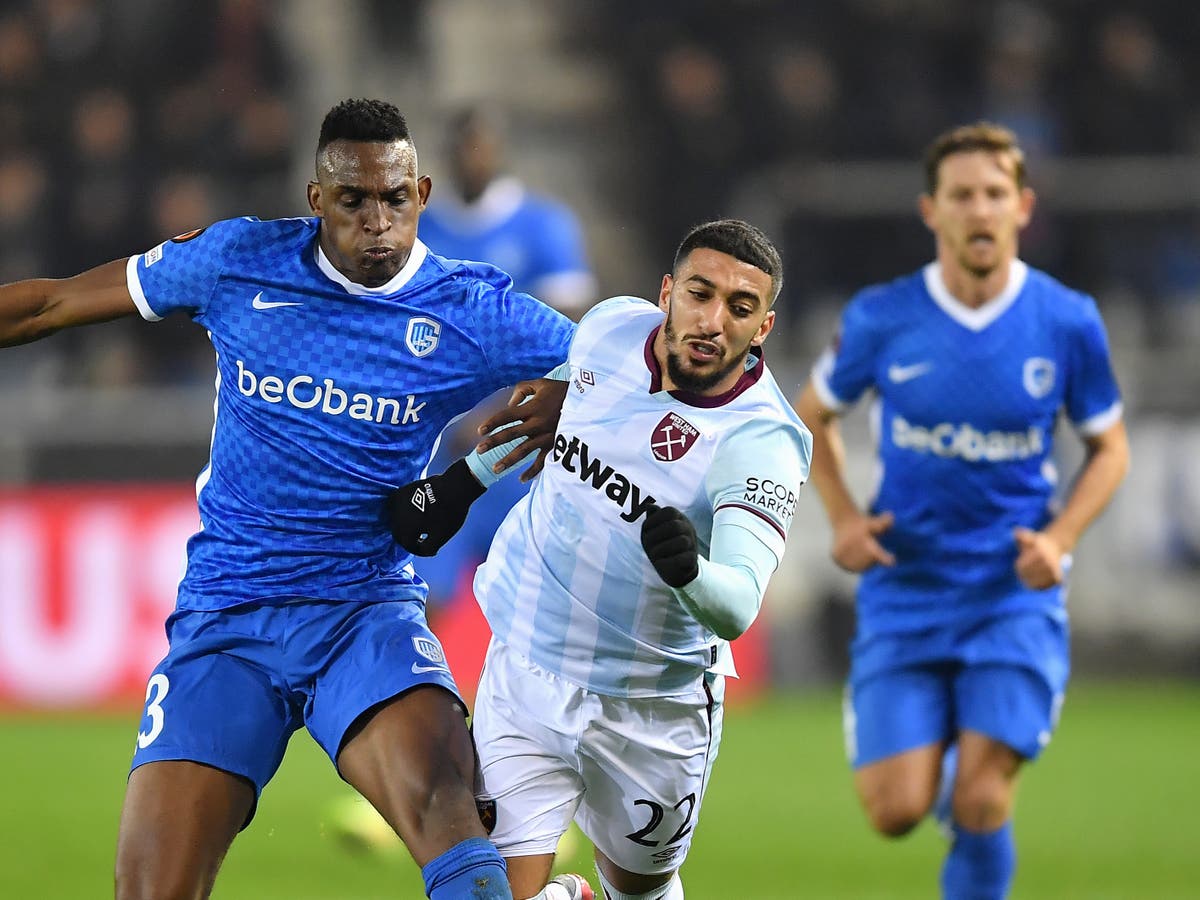 An own goal from Tomas Soucek cost David Moyes victory in his 1,000th match as a manager as West Ham were held to a 2-2 draw by Genk.

Said Benrahma had scored twice as West Ham came from behind to lead 2-1 in their Europa League clash in Belgium.

But the luckless substitute Soucek inadvertently headed a late cross inside the near post to leave the Hammers with just a point.

Nevertheless, Moyes will be satisfied to see his side, who were below par in the first half, still well clear at the top of Group H following three wins and a draw, and destined for the knockout stages.

The Hammers had swatted Genk aside 3-0 in London a fortnight ago, but the Belgians have since arrested a domestic slump and scored six goals in each of their last two matches.

The first bump in the road on West Ham’s continental journey came in only the fourth minute.

They were caught napping by a ball in behind that Joseph Paintsil raced on to and fired across Alphonse Areola, who got a hand to the shot but could not keep it out.

It was the first goal West Ham had conceded in the competition, and they could have shipped more in a chastening start for a side on an eight-match unbeaten run away from home.

A header by Genk’s captain, Bryan Heynen, was tipped over the crossbar, and Paul Onuachu nodded straight at Areola, before Paintsil broke clear again and squared for the lively Japan playmaker Junya Ito, who made a mess of his shot in front of goal.

West Ham did fashion some chances to equalise, with Craig Dawson’s header acrobatically tipped over the bar by goalkeeper Maarten Vandevoordt, who also denied Benrahma from close range, while Michail Antonio had a shot somehow cleared off the line.

But it was an incredibly sloppy first half from the visitors, so much so that it was difficult to imagine many of Moyes’ previous 999 half-time team talks being as animated as the the one he surely dished out here.

West Ham came out with more intensity after the break and Moyes made a triple substitution just before the hour – with Antonio among those making way – probably with one eye on Liverpool’s visit at the weekend.

The Hammers hauled themselves level moments later. Manuel Lanzini sent Vladimir Coufal overlapping down the right, and his pull-back was swept home by Benrahma.

West Ham tails were up and Coufal was inches wide from Aaron Cresswell’s cross, as was Dawson with a far-post header.

With 10 minutes remaining, Benrahma scored a fine solo goal, nudging the ball one side of defender Mujaid Sadick and skipping past him on the other before poking home at the near post.

But with three minutes to go, Soucek inadvertently glanced a cross from Genk substitute Angelo Preciado past Areola to deny Moyes victory on his big night.

Nick Kyrgios, quarterfinalist at Wimbledon, to face assault charge in Australia court, but attorney says allegations ‘not considered as fact’