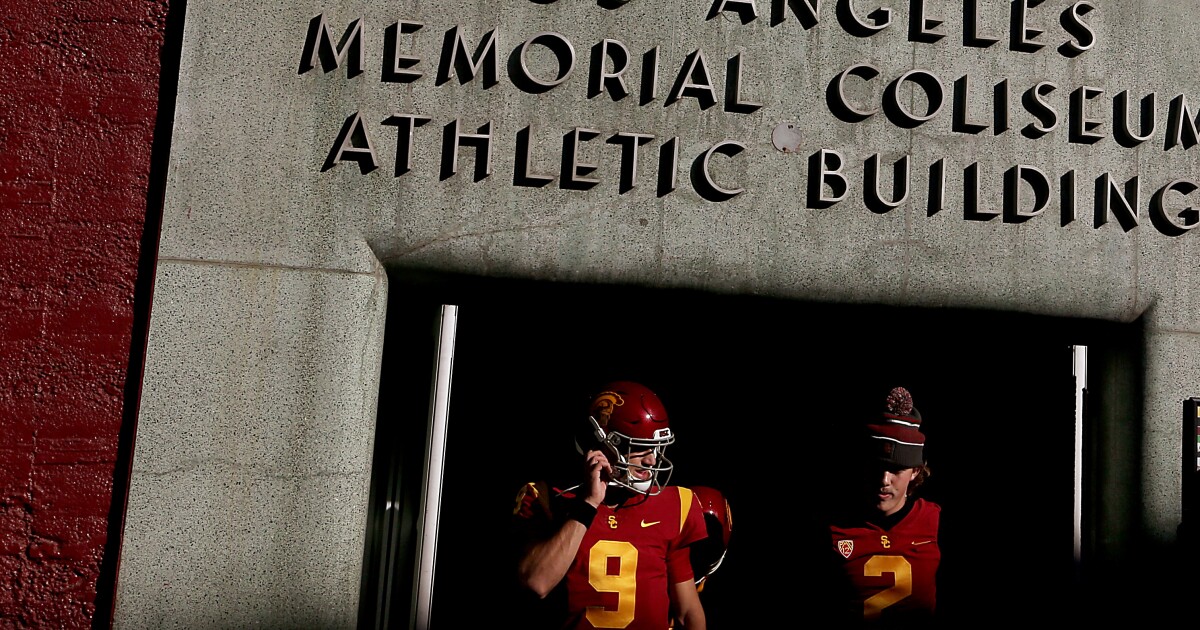 The decisive drive arrived Saturday night with six minutes remaining and Kedon Slovis still awaiting word on whether he would take the reins as USC’s quarterback.

For the better part of three seasons, there had been no question. Since taking over in the wake of JT Daniels’ season-ending knee injury in the 2019 opener, Slovis had started 25 games, enough to move into seventh place in career passing yards at USC. He had been named to the All-Pac-12 first team in each of his first two seasons and was chosen conference freshman of the year in 2019.

But in the game’s most critical moment Saturday, with the Trojans clinging to a touchdown lead over Arizona, Slovis was left on the sideline. Instead, freshman Jaxson Dart took his place, leading a scoring drive that consisted of four handoffs and a field goal — just enough to slip past the Wildcats 41-34.

Neither quarterback was aware until just before that fourth-quarter drive who would step in. A few days later, that same sense of uncertainty remains at USC.

Slovis and Dart split reps with the Trojans’ first-team offense at practice Monday, and both said afterward that they had no idea how coaches plan to divide playing time Saturday night, when USC (4-4, 3-3) visits Arizona State (5-3, 3-2) in a crucial Pac-12 game.

Trojans interim coach Donte Williams had no interest in elaborating Monday how he plans to handle the situation this week, noting only that the coaches would “continue to assess that as it gets closer and closer to the game time.”

After weeks of obfuscating on Dart’s health and USC’s plans at the position, it’s unlikely we will know what conclusion Williams and the staff come to about the quarterbacks until Saturday night.

“It’s about getting the right guy on the field so we win the football game, whatever that entails,” Williams said. “Like I said, it’s not really our issue. We’re fortunate because we have two really good quarterbacks we’re confident in. It’s more of our opponents, things they have to handle.”

But both quarterbacks were largely in the dark about their roles against Arizona. Williams said he notified Slovis earlier in the week that Dart would play the fourth quarter, but the junior quarterback said otherwise when asked after the game. A visibly frustrated Slovis said he was told Dart would get “a few series.” Dart said that he “honestly had no idea” who would go in.

That rotation might not be any clearer ahead of Saturday’s game. Pressed about last week’s plan and whether the two quarterbacks would know the plan earlier this week, Williams said, “I don’t want to talk about that anymore.”

“They’ll know probably going in what the plan is, and for the most part we try to stick to the plan,” Harrell said.

Whether that plan includes another even split remains to be seen. But for Slovis, sitting out long stretches of the game was certainly an adjustment. He said his interception Saturday that was returned for a touchdown was a product of not having seen Arizona’s linebacker creeping into the flat on a previous possession.

“You really have to just try to see the play if you can and go through in your own head what you would do,” Slovis said. “The biggest thing too is talking to each other in between series. I learned that the hard way on the interception.”

Slovis was the sharper of the two quarterbacks Saturday, completing nine of his first 11 passes for 145 yards and a touchdown before he was replaced by Dart. Slovis was six for 10 for 59 yards, a touchdown and an interception after he returned.

Dart, who missed the previous six weeks after having knee surgery, led USC on a 96-yard touchdown drive out of the gate in the second quarter but made some sloppy mistakes. He ironed them out with a more conservative approach through the air, finishing 12 for 18 for 109 yards and two touchdowns.

Dart said he would be ready “whenever my number is called” but that he expected the coaches “to be super upfront with us” about who they planned to play.

That didn’t appear to be the case last week, when Williams met with Slovis to tell him that they planned to integrate Dart into an offense that he spent the past two-plus seasons leading. Slovis asked whether the change was a result of something he had done. Williams said no, that USC just wanted to “get certain things in with Jaxson.”

But Dart, known for being more of a dual threat, never ran the ball Saturday and relied mostly on short passes. Still, the freshman was called upon late with the game on the line.

The decision was a tough one for the experienced Slovis to swallow. But Monday, when asked whether he was satisfied with the coaches’ explanation, Slovis said he wasn’t searching for answers.