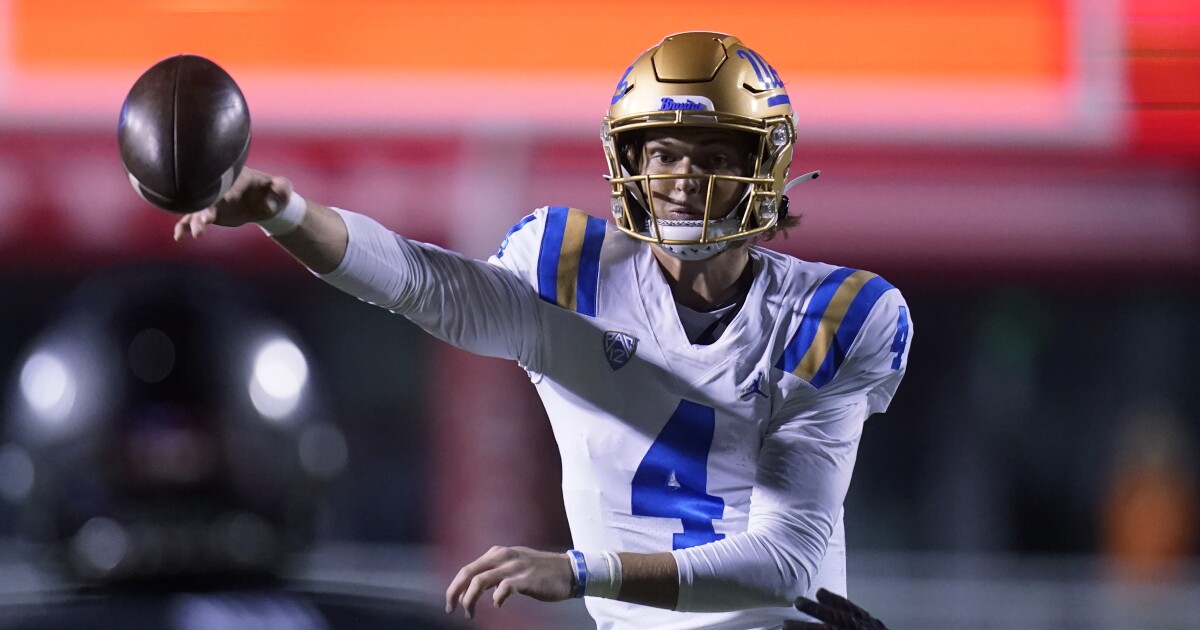 It was another opportunity for UCLA to do something memorable under Chip Kelly, an Arizona State loss earlier in the day opening a path to first place in the Pac-12 South.

Beat Utah on Saturday night with quarterback Ethan Garbers making his first start as an injury replacement for Dorian Thompson-Robinson and the Bruins would have the top spot all to themselves.

Garbers did his part. It was UCLA’s defense, the one constant stain since Kelly’s arrival, that once again failed to deliver.

Utah scored touchdowns on its first four drives, overpowering the Bruins with a relentless running game and handing them a 44-24 loss at Rice-Eccles Stadium.

The Utes (5-3 overall, 4-1 Pac-12 Conference) piled up 290 of their 469 yards on the ground, averaged 6.6 yards per run and grabbed that spot atop the division. The Bruins (5-4, 3-3) lost a road game for the first time this season and squandered a second consecutive opportunity to become bowl eligible for the first time under Kelly.

Garbers was impressive in his bid to help the Bruins beat the Utes for the first time since 2015. He showed composure under heavy pressure and some elusiveness running. He completed 27 of 44 passes for 265 yards with two touchdowns and one interception on a tipped pass.

“It was subpar,” Garbers said of his performance, “because the biggest thing is getting that ‘W’ and getting the win, and we didn’t pull it out. I mean I’m not satisfied with anything.”

Garbers’ nine-yard touchdown pass to tight end Greg Dulcich pulled UCLA to within 35-24 with 11:04 left, putting the onus back on a Bruins defense that made a rare stop to get the ball back to the offense.

But on the first play of UCLA’s drive that started at its own six-yard line, Garbers got smashed in the end zone by Utah’s Hauati Pututau after Bruins lineman Atonio Mafi missed a block. That gave Utah a 37-24 lead and the ball back, providing a chance for Utes running back Tavion Thomas to do more damage. He busted a 24-yard touchdown run up the middle, tying a school record with his fourth rushing touchdown.

Kelly wouldn’t address his embattled assistant, deflecting a question about how he could justify keeping Azzinaro given the team’s ongoing defensive struggles.

“Yeah, well, I’ll just talk about tonight,” Kelly said. “We didn’t do a good job in the run game. We played — even this year — very well on the defensive side of the ball and I think our defense has improved; our defense improved last year and when you look at some of the games we did early in the year I thought we played really well. Tonight, we did not play well in the rush category to give up that many yards.”

Thompson-Robinson, nursing an apparent injury to his right throwing hand, provided a tipoff of his status before the game when he threw warmup passes … with his left hand.

The Bruins were also without starting linebacker Caleb Johnson and right tackle Alec Anderson, who missed the game for undisclosed reasons. Anderson suffered an injury against Oregon last weekend but was able to return against the Ducks.

UCLA’s 28-10 halftime deficit was almost entirely a function of a defense that yielded touchdowns on each of Utah’s first four drives, allowing the Utes to average 7.9 yards per play to that point. The Bruins’ best defender might have been the turf that tripped up running back TJ Pledger at the end of a 30-yard run.

Garbers started the game well, his first pass going for a 15-yard completion to tight end Dulcich on a catch and run. The quarterback later showed some slippery moves while eluding defenders to run for six yards on fourth and two. UCLA eventually had first and goal at the nine-yard line but could get no closer. A third-down snap that Garbers wasn’t ready for hit him in the chest and he had to fall on the ball.

Another mistake proved pivotal in the second quarter when a Garbers pass that was tipped at the line of scrimmage went off Dulcich’s hands and was intercepted by Utah linebacker Nephi Sewell and returned to the UCLA 17. The Utes scored two plays later on Thomas’ third touchdown run, this one from 10 yards.

Garbers appeared to get more comfortable the longer he played, throwing for both of his touchdowns in the second half.

“For Garbs to come out down a couple of guys, just to rally the troops and continue to play and battle right down to the end,” Kelly said, “happy with the way Ethan played.”

Utah honored the late Aaron Lowe and Ty Jordan between the first and second quarters by retiring the No. 22 jersey they both had worn. UCLA provided its own tribute before the game, the Bruins huddling around the 22-yard line before leaving a bouquet of flowers.

There was another ceremony before the start of the fourth quarter when fans held up lights, illuminating the stadium while a video was played. Utah quarterback Cam Rising scored on a 12-yard run on the next play, the UCLA defense once again powerless to make a needed stop.

The loss likely ended the Bruins’ bid to contend in the Pac-12 South as well as any hopes of extinguishing their 22-year Rose Bowl drought. But they’re about to hit a soft pocket in the schedule with games against Colorado, USC and California remaining.

Kelly sounded almost defiant when asked if fighting hard and coming close was enough for a team teetering near the end of his fourth season.

“We still got a lot of football to be played this season,” said Kelly, who is 15-25 with the Bruins. “But I wouldn’t bet against that group in that room there, that group in that room there’s awesome and I love those kids. So we’ll be right back at it, those guys will get in on Monday for film and lifting, we’ll be back on the field on Wednesday and Friday next week and then get ready to go play our next game.”