Turner hits 7 3s, has 25 points in Pacers’ win over Knicks 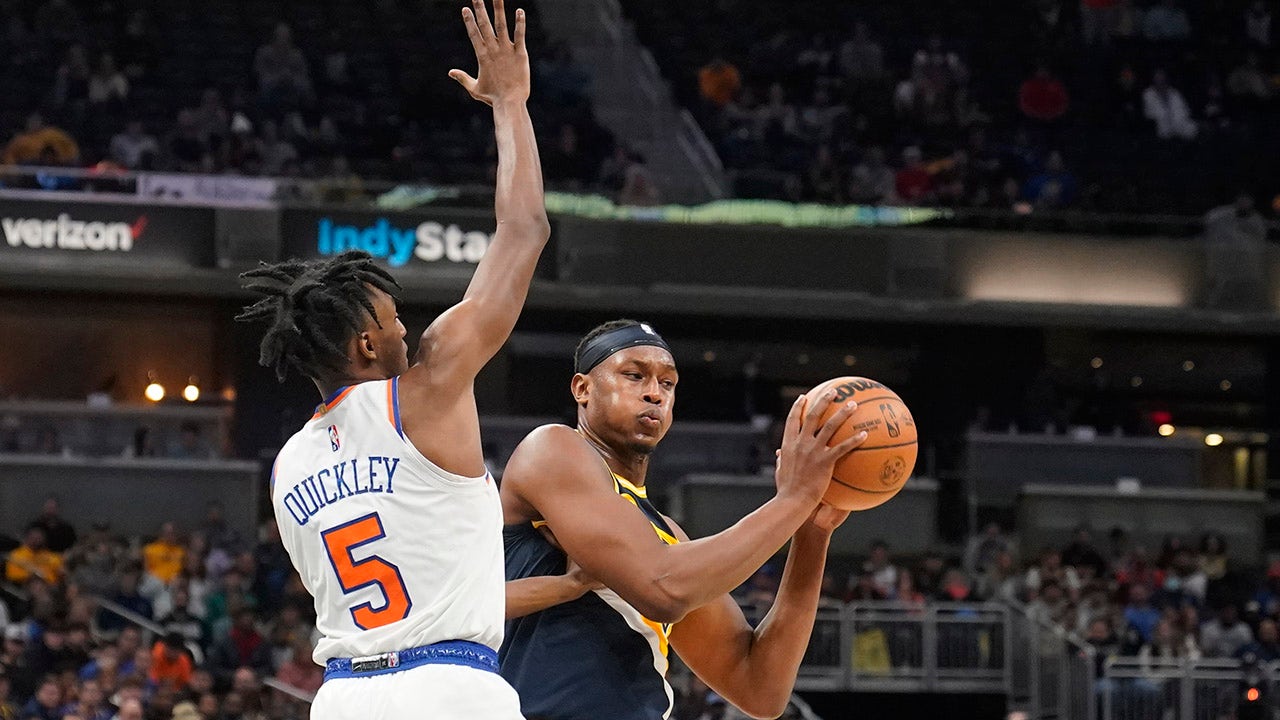 Myles Turner scored 25 points, hitting a career-high 7 of 10 3-pointers, and had 13 rebounds in the Indiana Pacers’ 111-98 victory over the New York Knicks on Wednesday night.

Turner scored the first eight points of the game — and the Pacers never trailed. Caris LeVert added 21 points for Indiana.

’Myles was huge for us,” LeVert said. “He had three blocks, guarding different guys on the switch. I don’t know if we play that well or win that game without Myles.”

RJ Barrett led New York with 23 points, and Julius Randle added 18 points and 14 rebounds. The Knicks pulled to 85-83 on Derrick Rose’s basket, but the Pacers scored the next five points to regain control. The Pacers held a 31-23 edge in the third quarter.

“We knew if we made stops on that end, we could get easy stops in transition,” LeVert said. “I think Malcolm Brogdon was preaching that. We held them under 100 points and they couldn’t really score in the fourth quarter.”

Turner left the game in the second quarter after taking a blow to the head from Julius Randle while taking a charge. He returned in the second half and opened with a 3-pointer in the first minute in the third quarter.

Knicks: Rose surpassed 12,000 career points with driving layup in the first quarter. Rose finished with 13 points. … Center Nerlens Noel made his season debut Wednesday after missing all four preseason games and the first seven regular-season games with a knee injury. Noel finished with two points and six rebounds in 18 minutes. … The Knicks have now lost two in a row and this was their first loss on the road in four games.

Pacers: Brogdon returned to starting lineup after missing the last three games with strained left hamstring. Brogdon finished with 17 points, eight rebounds and seven assists. It was the first time all season that LeVert and Brogdon played together. “They both shoot the 3 well, they both attack the basket,” Pacers coach Rick Carlisle said. “Seeing them together was a sight for sore eyes.”” … Pacers forward Domantas Sabonis, in foul trouble the entire game, fouled out with 10 points.

Carlisle said forward T.J. Warren is out of the boot and walking in sneakers. He had a positive scan on his injured foot but Carlisle said Warren is still weeks away from returning, not days.

After the Knicks. cut the lead to 85-83 in the fourth quarter, the Pacers clamped down on defense

Knicks: At Milwaukee on Friday night.

Pacers: At Portland on Friday night.