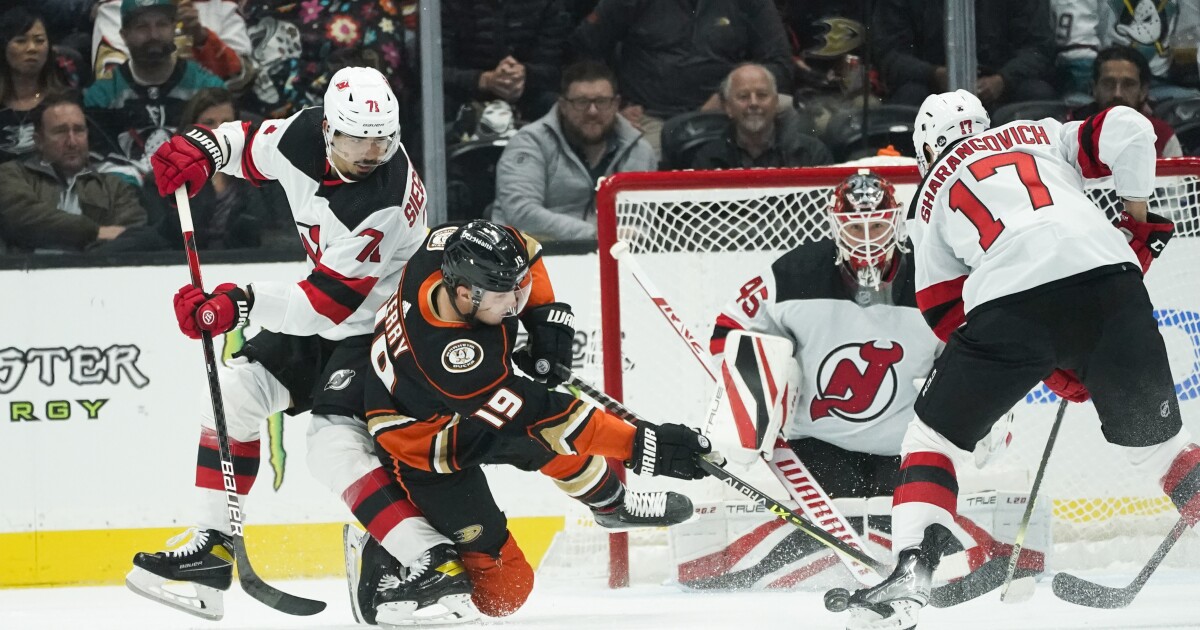 Troy Terry had two goals and an assist to extend his point streak to nine games, John Gibson made 28 saves and the Ducks beat the New Jersey Devils 4-0 Tuesday night.

Terry’s three-point night gave him the NHL’s longest active and overall point streak with seven goals and five assists during the nine-game span. It is the longest point streak by an Anaheim player since Getzlaf had an 11-game run during the 2015-16 season.

“He put in the time in the offseason and now he’s just going out there, having fun and playing with confidence,” Gibson said. “You can see it in his game because he has confidence with the puck and is making plays. I think he has found his game.”

Gibson recorded his 23rd career shutout in his 330th appearance. It is also his fifth win in seven games against the Devils.

Ryan Getzlaf had a power-play goal and two assists while Isac Lundestrom added a short-handed score for the Ducks, who have earned a point in four straight games and won two straight in regulation for the first time this season.

The Ducks were two for seven on the power play and took advantage of a Devils team that has the sixth-worst penalty-killing unit in the league.

Ducks coach Dallas Eakins was not pleased with his team’s performance in even-strength situations but was happy to see other units pick up the slack.

“Our special teams stepped up, we killed penalties, we scored on the power plays, we get an extra one on the penalty kill, and our goalie’s excellent,” he said. “Some nights you’re gonna win ugly, and tonight’s win was a little bit of that.”

Jonathan Bernier stopped 23 shots for New Jersey, which was blanked for the first time. The Devils might have suffered a bigger loss as defenseman Dougie Hamilton sustained a lower-body injury during the first period and did not return. Coach Lindy Ruff did not have an update on Hamilton after the game.

“You don’t want to see a guy like that getting hurt and not playing, but at the end of the day we have to step it up and play our game,” forward Nico Hirschier said.

Terry scored on a one-timer while the Ducks had a two-man advantage off Getzlaf’s pass to give them a 2-0 lead at 3:48 of the second period. He tallied his seventh goal 3:31 into the third period on a 2-on-1 with a wrist shot past Bernier’s short side.

Getzlaf, who became the Ducks’ career leader in points Sunday, has a goal and five assists in his last four games. The Ducks’ captain scored his first goal of the season at 12:05 of the first period with a slap shot from the top of the right faceoff circle. Getzlaf was also able to take advantage of Bernier being screened by Sonny Milano.

Lundestrom, who has a point in five straight games, took advantage of a turnover deep in the Devils’ defensive zone and put a backhander into the net for his second goal of the season at 7:19 of the third period.

“We got off to a great start in the game. We came out with a lot of energy, skated well and had the first two or three chances in the game to take the lead. But Gibson made a couple really good saves,” Ruff said. “I thought as the game went on, we didn’t skate very well. I thought maybe the travel caught up to us.”