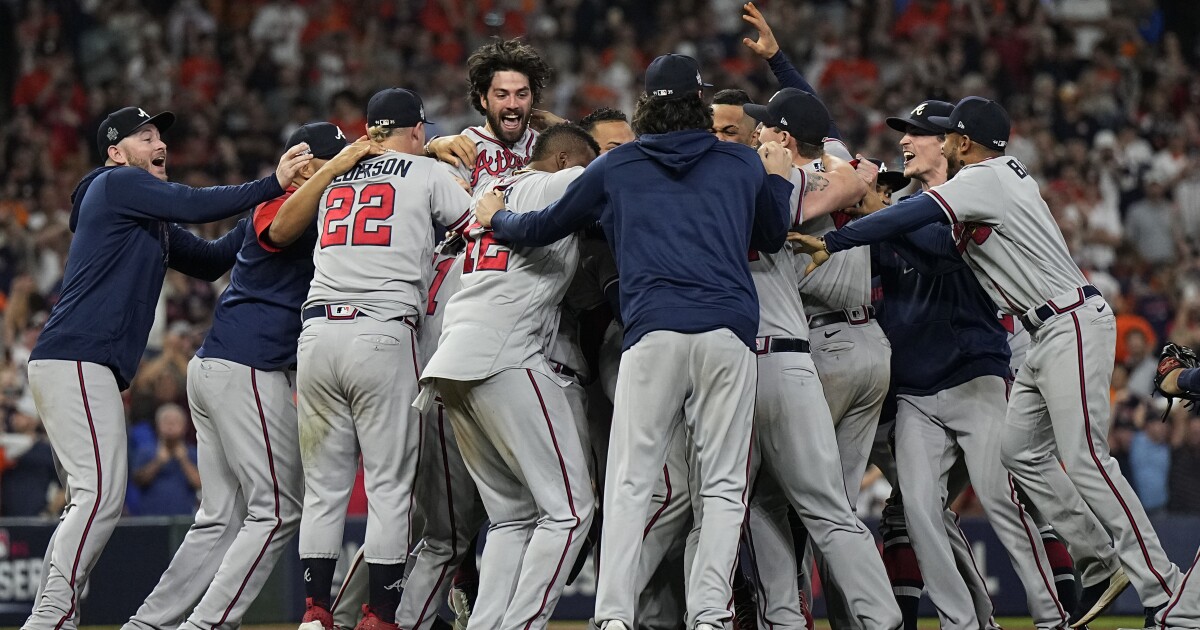 Howdy, I’m your host, Houston Mitchell. Let’s get right to the news.

Jack Harris on baseball: This year’s World Series once seemed destined to be a titanic clash, one that would have been woven with narratives of revenge and vindication in an emotionally-charged rematch.

The Dodgers and Houston Astros, after all, were on the verge of reprising their 2017 Fall Classic meeting, of squaring off for a title for the first time since the Astros cheating scandal became public, of settling a much-anticipated final score.

For years, they’ve been baseball’s premier powerhouses, perennially the two biggest juggernauts in the sport.

Their paths, however, never ended up crossing.

This year, they were nothing more than footnotes in someone else’s fairy tale story.

For the first time since 1995, it is the Atlanta Braves who are champions of baseball, claiming the franchise’s fourth World Series title with a 7-0 rout of the Astros in Game 6 on Tuesday night at Minute Maid Park.

The team that was under .500 for the first four months, that finished the regular season with just 88 wins, and that was an underdog in each of its three playoff series — as well as Tuesday’s clincher — proved to be this postseason’s unstoppable force.

Back in spring training, this wouldn’t have been a stunning result. The Braves were considered strong preseason contenders, a burgeoning squad that, despite squandering a 3-1 lead in last year’s National League Championship Series to the Dodgers, had promising young starting pitching, a deep and talented lineup, and the requisite experience to make a deep run in the fall.

Broderick Turner on the Lakers: Even if the Lakers were playing the Houston Rockets for the second time this week, coach Frank Vogel said the game Tuesday night was still all “about us” and not the opponent.

It was about what the Lakers were trying to create and the schemes they want to employ and the defense they want incorporate for this 2021-22 campaign.

The Rockets, however, came out to challenge everything the Lakers were about, pushing the pace, scoring with ease at times, refusing to back down even if Houston had lost to the Lakers by 10 points on Sunday night.

It took LeBron James, Anthony Davis and Russell Westbrook doing big work and it took Kevin Porter Jr. missing a game-winning three-pointer for the Lakers to escape with a 119-117 win over the Rockets.

J. Brady McCollough on college football: The College Football Playoff selection committee’s first rankings of the season served as a reminder of why expansion is a must for the health of the sport long term.

Here are the five biggest losers from Tuesday’s unveiling (hint: None of them are from the Southeastern Conference or the Big Ten):

The Cincinnati Bearcats are undefeated and ranked No. 2 in both polls, but they can now get used to seeing a No. 6 by their name because college football’s most important rankings were not swayed by their 24-13 win over No. 10 Notre Dame in South Bend — or the emotional pull of giving a Group of Five conference school that elusive first shot in the playoff.

“The committee has great respect for Cincinnati,” CFP selection committee chair Gary Barta, the athletic director at Iowa, told ESPN’s Rece Davis. “The win at Notre Dame is a really impressive win. When you look at their schedule and who they played after that, most recently in the last two weeks, a 2-6 Navy team and then a 1-7 Tulane team with a freshman quarterback starting, looking at the whole picture we feel six is the right place for Cincinnati.”

Ryan Kartje on the Trojans: The decisive drive arrived Saturday night with six minutes remaining and Kedon Slovis still awaiting word on whether he would take the reins as USC’s quarterback.

For the better part of three seasons, there had been no question. Since taking over in the wake of JT Daniels’ season-ending knee injury in the 2019 opener, Slovis had started 25 games, enough to move into seventh place in career passing yards at USC. He had been named to the All-Pac-12 first team in each of his first two seasons and was chosen conference freshman of the year in 2019.

But in the game’s most critical moment Saturday, with the Trojans clinging to a touchdown lead over Arizona, Slovis was left on the sideline. Instead, freshman Jaxson Dart took his place, leading a scoring drive that consisted of four handoffs and a field goal — just enough to slip past the Wildcats 41-34.

Neither quarterback was aware until just before that fourth-quarter drive who would step in. A few days later, that same sense of uncertainty remains at USC.

Jackson, 34, had requested a trade because of his limited role for a team that is 7-1 heading into Sunday’s game against the Tennessee Titans at SoFi Stadium. But Tuesday’s NFL trade deadline came and went without the Rams finding a taker. The Rams placed him on waivers after the deadline.

“Obviously, it didn’t work out like any of us — what our vision was when we signed him,” general manager Les Snead said. “That’s DeSean, that’s Sean, that’s the Rams as a whole.

NFL roundtable: Is ‘renting’ Von Miller worth the price for the Rams?

According to police, Ruggs was driving a Chevrolet Corvette a little before 3:40 a.m. when it crashed into the rear of a Toyota RAV4 on a busy thoroughfare in a residential area several miles west of the Las Vegas Strip.

The Toyota caught fire and the driver died, police said. She was not immediately identified.

Ruggs, 22, “showed signs of impairment,” according to a police statement that said he will be charged with felony DUI resulting in death.

Former FIFA officials Sepp Blatter and Michel Platini were charged with fraud and other offenses by Swiss prosecutors on Tuesday after a six-year investigation into a controversial $2-million payment.

The 85-year-old Blatter and 65-year-old Platini now face a trial within months at federal criminal court in Bellinzona.

The case from September 2015 ousted Blatter ahead of schedule as FIFA president and ended then-UEFA president Platini’s campaign to succeed his former mentor.

Kevin Baxter on LAFC: The scenario was simple for LAFC heading into the final week of the MLS regular season: win its final two games and the team goes to the playoffs. Anything short of that and well, it gets complicated.

Tuesday it got complicated, with LAFC and the Vancouver Whitecaps playing to a 1-1 draw at Banc of California Stadium, setting up a must-win game for LAFC in its season finale Sunday on the road against the Colorado Rapids.

Both goals came in the first half with Cristian Dájome scoring for Vancouver and Mamadou Fall matching that for LAFC deep in stoppage time.

The tie leaves LAFC ninth in the Western Conference standings, two places and two points out of a playoff berth. And the only path through is a narrow one.

LAFC would have to beat the Rapids on the road and at altitude, hope that Real Salt Lake wins neither of its final two games with Portland and Sporting Kansas City and see the Galaxy lose or draw at home with Minnesota in their final match.

Troy Terry had two goals and an assist to extend his point streak to nine games, John Gibson made 28 saves and the Ducks beat the New Jersey Devils 4-0.

Terry’s three-point night gives him the NHL’s longest active and overall point streak with seven goals and five assists during the nine-game span. It is the longest point streak by an Anaheim player since Getzlaf had an 11-game run during the 2015-16 season.

Gibson recorded his 23rd shutout in his 330th appearance. It is also his fifth win in seven games against the Devils.

THIS DATE IN SPORTS

1899 — Jim Jeffries beats Sailor Tom Sharkey to retain the world heavyweight title after referee George Siler stops the fight in the 25th round at the Greater New York Athletic Club.

1968 — Jim Turner of New York kicks six field goals to lead the Jets to a 25-21 victory over the Buffalo Bills.

1995 — The Toronto Raptors and Vancouver Grizzlies open their first NBA season with victories. The Raptors beat New Jersey 94-79 and the Grizzlies beat Portland 92-80.

1996 — Philadelphia kicker Gary Anderson becomes the fourth player in NFL history to crack the 1,500 point mark with his first-quarter extra-point kick in a 31-21 win over Dallas.

2001 — Arkansas beats Mississippi 58-56 in seven overtimes in the longest major college football game in history. The Razorbacks stop the Rebels’ 2-point conversion try in the seventh overtime for the win. After ending regulation tied at 17, the teams score touchdowns in every extra period but the second.

2007 — Navy snaps an NCAA-record 43-game losing streak to Notre Dame with a 46-44 victory in triple overtime. It’s the first time Navy beat Notre Dame since a 35-14 win in 1963 when Roger Staubach was quarterback for the Midshipmen.

2007 — Al Arbour makes a one-night return to the bench and the New York Islanders rallies from a two-goal deficit to beat Pittsburgh 3-2. Arbour was behind the bench for the Islanders’ four Stanley Cup championships in the 1980s and was invited back to coach the team for the 1,500th time. He earns win No. 740.

2007 — Todd Reesing throws a school-record six touchdown passes as No. 8 Kansas batters Nebraska 76-39. The Jayhawks score touchdowns on 10 straight possessions and rolled up the most points ever scored against Nebraska in 117 years of Huskers’ football.

2012 — Kenjon Barner rushes for a school-record 321 yards and five touchdowns and No. 2 Oregon produces another landmark offensive performance in a 62-51 victory over No. 18 USC. Oregon’s 730 yards and 62 points are the most ever allowed by USC, which began playing football in 1888.

2012 — Brooklyn makes a winning return to major pro sports, with the Nets topping the Toronto Raptors 107-100 in the first regular-season NBA game at Barclays Center.

2013 — Nick Foles ties an NFL mark with seven touchdown passes and throws for 406 yards to revitalize the Philadelphia Eagles in a 49-20 victory over the Oakland Raiders.

Supplied by the Associated Press

The Braves win the World Series. Watch and listen here.

That concludes today’s newsletter. If you have any feedback, ideas for improvement or things you’d like to see, email me at houston.mitchell@latimes.com, and follow me on Twitter at @latimeshouston. To get this newsletter in your inbox, click here.