The Heart and Soul of a Franchise Shines Through 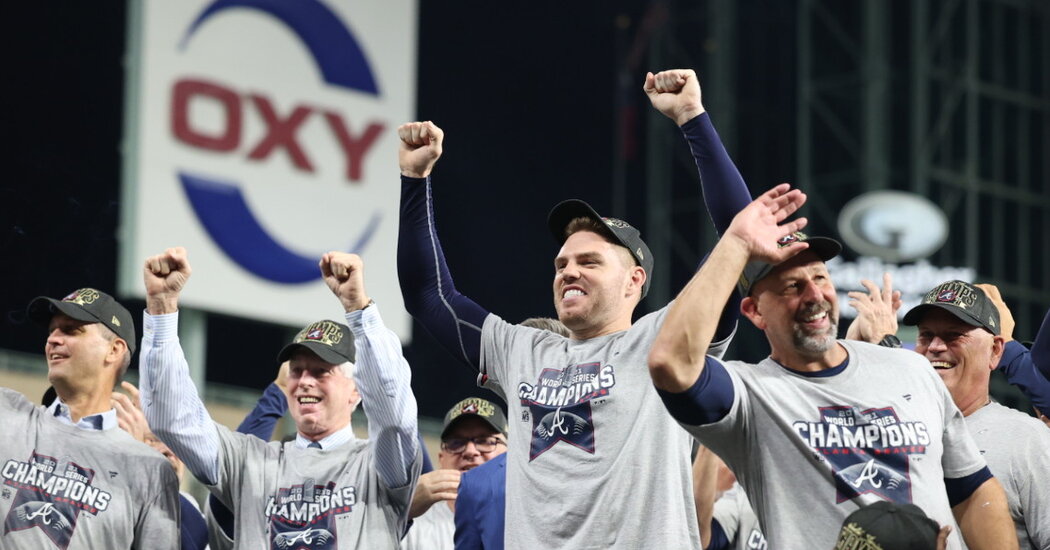 HOUSTON — The friendliest man in baseball is a champion. Freddie Freeman, the Atlanta Braves’ slugger known for smiles, small talk and soft-serve ice cream, hit the last home run of the season and caught the throw from shortstop for the final out of the World Series. Nice guys finish first.

This is the life Freeman wanted — the baseball career, yes, but also the reputation he has earned along the way. He owed that much to his mother, Rosemary, who died of melanoma in 2000.

“He felt like, to honor his mom, he had to be a great kid,” his father, Fred Freeman, said on the Minute Maid Park infield late Tuesday night, after Atlanta finished off the Houston Astros, 7-0, in Game 6. “That was it. When he was 10, that’s what he decided he was going to be. He always said, ‘I know mom’s watching.’”

The roof was open on a warm night here Tuesday, perfect viewing for Hank Aaron, Phil Niekro, Rosemary Freeman and so many more. Maybe you believe in that imagery, maybe you don’t. But the soul of the Braves does, and for now, he is the one atop the baseball world.

“Believe me, I wish I was able to hug my mom on that field,” Freeman said. “But I know she’s up with my grandma right now, jumping up and down.”

Freeman said his wife, Chelsea, texted him two hours before Game 6 to tell him his mother would be proud of him. It was not a message Freeman thought he needed then, he said, because it made him emotional before the biggest game of his life.

But it was appropriate, he added, and it worked. It was comforting, said Freddie’s older brother, Andrew, to think of how their mother would have celebrated.

“She’d be the first one on that field, running out to bearhug him right now,” Andrew said. “She did everything for us. She didn’t know baseball, so she bought ‘Baseball For Dummies’ to know how to do this thing. She would always wear our buttons — she was the ‘Button Mom’ in Little League — and to think that if she was here today, oh my gosh. It would be absolutely amazing.”

Rosemary might have known that her son was bound for stardom. In tee ball at age 6, Freddie hit the ball so hard that he was deemed too dangerous for that division of the North Sunrise Little League in Orange, Calif. He practiced with the 12-year-olds instead.

At age 7, Freeman played with the 9-year-olds. At 9, he played with the 12-year-olds. As a senior at El Modena High School, he was chosen by Atlanta in the second round of the 2007 draft. Fred had to sign the contract — for a $409,500 bonus — because Freddie was only 17, and when Freddie grew homesick in the Gulf Coast League, Fred flew to Orlando for two weeks of ballgames on back fields and dinners at Applebee’s.

A pattern was established: Freeman would struggle, call dad and find his way.

“So I flew out to Charlotte, because they were playing there, and I watched one game and he struck out four times. And I said, ‘Freddie, you’re so excited, there wasn’t one strike that you swung at.’ He said, ‘Really?’ I said, ‘Freddie, they’re bouncing up there. Tomorrow, don’t swing. You can’t do any worse.’ So he walked the first two times on eight pitches, and then the third time up he hit one off the center field fence on the first pitch.”

“I don’t know what I’d do without him, quite honestly,” said Braves Manager Brian Snitker. “He’s my rock. I go to him with things. I’ve been with him since the first day he came here in the big leagues. He’s everything that the Braves stand for.”

The ball from the final out — thrown by Will Smith, hit by Yuli Gurriel, fielded by Dansby Swanson, caught by Freeman — belongs to Snitker, Freeman said. It was a typical gesture from Freeman, who also turned down General Manager Alex Anthopoulos’s offer to buy him an ice-cream machine for his home as a gift for winning the division.

That decision, Freeman conceded, had more to do with upkeep than humility. But he feels a strong bond to the Braves, who rebuilt around him while trading star teammates like Jason Heyward, Craig Kimbrel, Andrelton Simmons and Justin Upton. The team endured four losing seasons in a row during Freeman’s prime, and he never complained.

“They didn’t really owe me anything,” he said. “I owed everything to them because they gave me the opportunity to live out a childhood dream. So in my mind, I wanted to do everything I possibly could to help get this team back to winning, because I came up when we were winning.”

This was Freeman’s sixth trip to the postseason, and the most unlikely. Atlanta had the fewest victories (88) of any team in the playoff field, and did not nudge their record above .500 for good until Aug. 8.

In a doubleheader sweep by the lowly Arizona Diamondbacks in April, Atlanta managed one hit in the first game (by Freeman) and none in the second against Madison Bumgarner. Freeman finished that game with a .205 average.

“After that game, I was sitting there with him going, ‘My gosh, this could be a very long year,’” Andrew Freeman said. “And you know what? He’s like, ‘We’re a good team.’ He believed it. He believed this was a good team. He believed they had what it took to win a championship.”

A barrage of injuries, most significantly to outfielder Ronald Acuña Jr., could have challenged that belief. But, then, it is hard to pierce Freeman’s aura of positivity.

“Freddie was a believer all the way,” said Terry McGuirk, Atlanta’s chairman. “Freddie’s never had a day where he took off and didn’t play hard. That’s the makeup that enabled this team to build around him and create what we have today.”

McGuirk added: “You don’t get here without the veteran leaders, and he’s the leader of the veterans.”

The end of the World Series also brought an end to Freeman’s eight-year, $135 million contract. He won the National League’s Most Valuable Player Award in 2020, thrived in this postseason (a .304 average with five homers and a 1.045 on-base plus slugging percentage) and will command a rich contract in free agency.

Freeman has been open about his wishes — “I think everyone in this room knows I want to stay here,” he said in a news conference during the World Series — and while McGuirk was coy about the future after Game 6, he did say, “Hey, I love him.”

McGuirk also said Freeman deserves a spot in the Hall of Fame, and he’s probably right. According to Baseball Reference, the most similar player to Freeman at every age, from 21 through 31, is Eddie Murray, a first-ballot inductee to Cooperstown.

If Freeman gets there, the 2021 championship will be etched on his plaque. It is the fulfillment of a wish Freeman shared at his locker in Atlanta one day in 2017, another lost season, when a night like Tuesday seemed as distant as a star above the Texas sky.

“Everybody talks about legacies and all that,” Freeman said then. “What’s a legacy without a championship? What’s the point of that? I want to win, and that’s all I care about.”