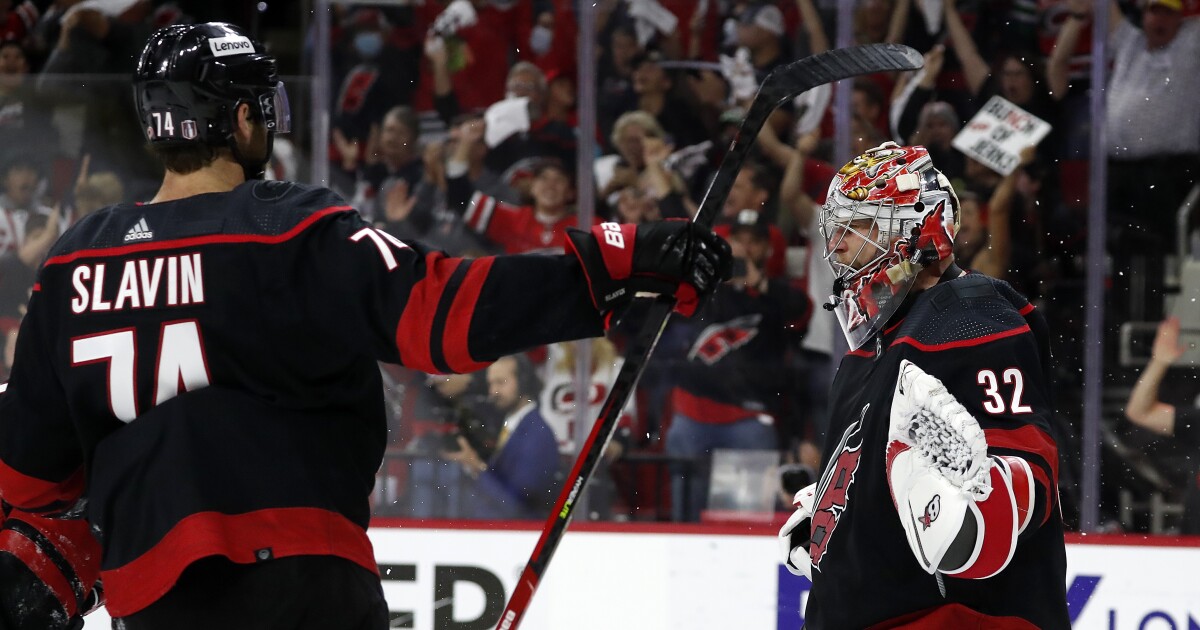 Max Domi scored twice in the second period and Antti Raanta had 27 saves to help the Carolina Hurricanes beat the Boston Bruins 3-2 on Saturday to win the deciding Game 7 of their Eastern Conference first-round playoff series.

Teuvo Teravainen also scored for the Hurricanes, who finally put away a Bruins team that had ousted them from the playoffs in two of the past three postseasons. Carolina’s victory ended a series in which neither team could manage a road win, with the Hurricanes eventually getting the final word backed by yet another rowdy and loud home crowd.

Carolina advanced to the second round to face the winner of Sunday’s Game 7 between the New York Rangers and the Pittsburgh Penguins.

Domi was an unlikely star in this one. Carolina acquired him ahead of the March trade deadline, and he rewarded the Hurricanes by scoring the first postseason goals of his career. He also assisted on Teravainen’s goal with a perfect pass to the top of the crease for the first-period putaway.

Raanta, who had never started a postseason game before this series, was again steady in net. He had probably his best stop on a full-split save to deny Taylor Hall near the left post in the first period of a scoreless game.

Jake DeBrusk scored a second-period goal for the Bruins, while David Pastrnak had one with 21.7 seconds left in the game with Boston having pulled Jeremy Swayman for the extra attacker.

From there, the Hurricanes had to hang on through one final clock-killing shift to protect the lead before they could finally celebrate.

Swayman finished with 28 saves for Boston.

The Bruins found themselves playing catch-up after Domi’s first goal, in which he skated in on the left side to bury a redirect attempt from Jordan Staal at 3:14 of the second.

Later, after DeBrusk had beaten Raanta from the top of the crease, Teravainen whipped a pass to Domi for a one-timer that blasted the puck past Swayman at 10:33 of the second for a 3-1 lead.

The Bruins, a tested veteran squad, were in the playoffs for the sixth consecutive season. That run included a sweep of the Hurricanes in the 2019 Eastern Conference finals as well as a five-game win in the first round of the Toronto bubble a year later.

This time, the Hurricanes never trailed in the series before finally grinding through after dominating the Bruins in three regular-season meetings. And Boston heads into an offseason with some uncertainty about the future of captain and longtime No. 1 center Patrice Bergeron, who can become an unrestricted free agent after 18 seasons with the team.

The Hurricanes improved to 6-0 in Game 7s since the former Hartford Whalers relocated to North Carolina in 1997. That includes the 2006 Stanley Cup Final against Edmonton as well as a second-round series win on the road at Boston in 2009.

This marks the first time Boston exited from the playoffs without winning a series since the Bruins fell in a six-game series to Ottawa in 2017.

The Hurricanes had their biggest home crowd in franchise history for this one with an attendance of 19,513.