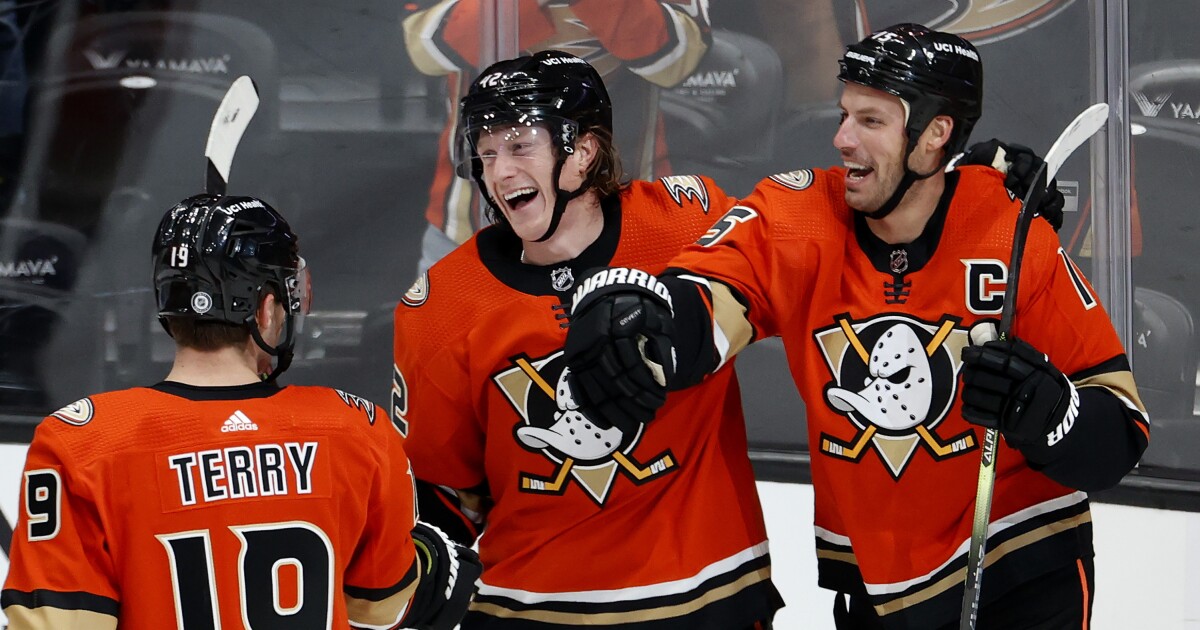 Ryan Getzlaf broke a tie with Teemu Selanne for Anaheim’s career points record, assisting on Troy Terry’s third-period goal in the Ducks’ 4-2 victory over the Montreal Canadiens on Sunday.

Getzlaf set up Terry’s power-play goal midway through the third with a tip pass near center ice to help the Ducks end a six-game winless streak.

“I can’t tell you how much that means to me to be able to be in front of our fans, our ownership, my family, to be here in our building to accomplish that,” Getzlaf said. “That was a great thing for me.”

That he passed the franchise record of his former teammate and mentor made it mean that much more.

“Listen, I’m not here to take Teemu’s spot; Teemu did more for Southern California hockey than anyone, I think,” Getzlaf said. “I am honored to be part of that and be that with him. There’s no taking over what he did, that’s for sure. Teemu was the face of everything, and Teemu has an ability to embrace that.”

Adam Henrique, Vinni Lettieri and Sam Carrick also had power-play goals for Anaheim, and John Gibson made 16 saves. The Ducks won for the first time since Oct. 18 at Calgary and for the first time at home since topping Winnipeg on opening night.

Mike Hoffman and Jake Evans scored for Montreal, and Sam Montembeault stopped 22 saves. Montreal lost for the second time in two nights in Southern California after falling 5-2 to the Los Angeles Kings on Saturday.

“I think, in a way you always want to have that urgency to win and to make those plays,” Evans said. “A lot of us are gripping our sticks a little tightly. You want to win so badly and you don’t want to screw up and sometimes that can cost you.”

The Ducks opened the scoring at 3:39 of the first when Henrique took a pass from Sonny Milano from near the left corner and beat Montembeault under the right arm.

The Canadiens tied it 33 seconds later on their own power play, with Hoffman firing a shot from the top of the right circle over Gibson’s shoulder and off the underside of the crossbar.

The Ducks regained the lead with 7:13 left in the period on Lettieri’s first goal of the season. Anaheim had the man advantage after Cedric Paquette was given a major penalty for boarding Trevor Zegras.

The Canadiens tied it late in the second period. Evans won a scramble for the puck in front of the goal and pushed it under Gibson’s legs for his first of the season.

After Terry’s goal midway through the third period, Carrick added an empty-netter with 1:10 to play.

“I forgot that I even scored it. It was so cool for me,” Terry said. “As soon as it happened, just to jump into his arms like that, it was a special moment. Selfishly, it was probably one of the coolest moments of my hockey career and something that I’ll remember forever.”

While the Ducks had plenty to celebrate, the Canadiens are just trying to recalibrate.

“We have a big homestand coming up and all these games are so important during the regular season to put yourself in a good position to play for a playoff spot,” Montreal’s Nick Suzuki said. “We haven’t done a great job of being consistent every single night and that’s got to change. I feel like we have been talking about it a lot, but on the ice something has got to change and we have to get better.”

Notes: Montreal forward Mathieu Perreault had a procedure for a detached retina in his right eye and will miss two-three weeks. … Ducks forward Jakob Silfverberg was placed in the NHL’s COVID-19 protocol, while Rickard Rakell was placed on injured reserve because of an upper-body injury.