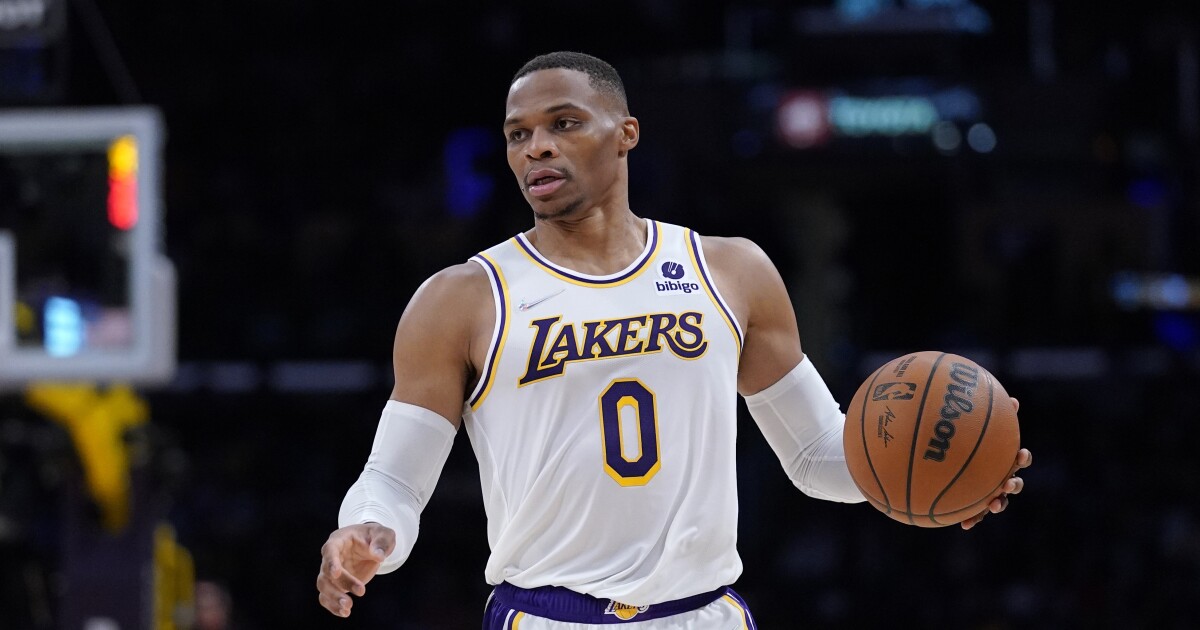 As Russell Westbrook dribbled the basketball toward the half-court line at Staples Center on Friday night, the Lakers guard began to shuffle his feet, doing the “crip walk” as he danced his way up the court against the Cleveland Cavaliers.

The song “G’d up” by Tha Eastsidaz was playing and the music had caught his attention, causing Westbrook to do his dance even while the game was going on.

It was his way of bringing some swag back to the Lakers, leading them past the 26-point collapse at Oklahoma City last Tuesday and letting his teammates inside of his veneer.

As an L.A. kid from Leuzinger High in Lawndale who attended UCLA and now is playing for his hometown Lakers, the song was cathartic for Westbrook and allowed him to express himself.

“All I heard was the music and I was like, ‘Oh, this is my joint right here.’ This is my …’ And then my feet start moving. That’s just how it works with me,” Westbrook said after practice Monday. “So, I love to dance and it’s something that I kind of enjoy doing. So, it kind of happened in the middle of the game but, you know, enjoying it. But that also goes to what I mentioned after that game about just our swag and my energy. That’s who I am and in order for us to be who we need to be, I need to be who I am and be free and do things where, to me, it feels normal.”

Westbrook thinks he may have done it before when he played for Oklahoma City. Still, the reaction from some people was, “What the hell was he doing?”

“And I’m OK with that,” Westbrook said. “But that brings a good energy to my team and my teammates, and it puts us in a happy place. I always remember, throughout a season and throughout a game, you always want to make sure you’re having fun — win, lose or draw. Because if you’re not, it kind of becomes — for me personally — I get so tense. If I’m just super focused and not having no fun then I lose track of kind of what I’m supposed to be doing. So that also is a combination of all that, just having fun, smiling and enjoying the game.”

After that game, LeBron James joked in an Instagram stories post about Westbrook: “Something is really wrong with him,” adding smiling emojis.

His dance moves gave Westbrook’s teammates a small peek inside the man.

“They just said, ‘That’s just me being me.’ You know, I like to joke and enjoy the game and have fun while doing it,” he said. “But also at the same time, I’m going to compete to the best of my ability and that’s just all kind of who I am. And I think some of them didn’t notice it right away and after the game everybody was like, ‘Oh, I didn’t realize you did this throughout the game.’ I was like, ‘Yep, we needed it today.’ ”

Lakers coach Frank Vogel said guard Wayne Ellington was going to practice with the South Bay Lakers on Monday to get “some live work.” Ellington has been out all season with a hamstring strain.

Kendrick Nunn remains out with a bone bruise in his right knee.

Up next: vs. Houston

Update: The Lakers continue their four-game homestand with another game against the Rockets, running it back after defeating them Sunday with LA’s best defensive effort of the season. Anthony Davis, who anchors the Lakers’ defense, is ranked third in the NBA in blocked shots (2.3). Rockets center Christian Wood leads the team in scoring (19.2) and rebounds (11.5).