Q&A: How the NFL altered course to keep season going amid pandemic 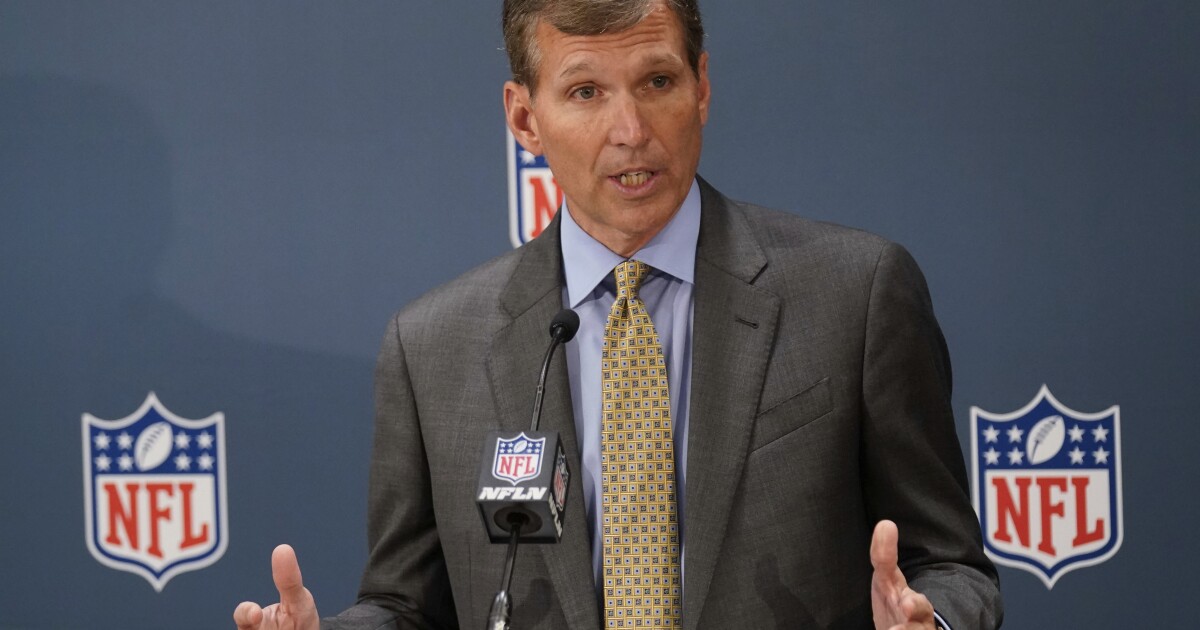 Just as with last year, the NFL made it through the entire regular season without canceling games because of positive coronavirus tests but with some adjustments to the schedule.

As it heads into the playoffs, and with the Super Bowl back in Los Angeles for the first time in 29 years, the league, working with the NFL Players Assn., has the daunting challenge of finishing the season without being derailed by the highly contagious Omicron variant. A total of 914 players tested positive with one variant or another during the regular season.

Dr. Allen Sills, the NFL’s chief medical officer, spoke to the Los Angeles Times this week about the league’s ever-adapting protocols, the lessons learned during the last two years and the prospects moving forward.

How have the NFL’s protocols changed amid the rising Omicron numbers across the country?

Specific to Omicron we have made a number of adjustments. The key one would be our testing strategy. We pivoted away from sort of a broad surveillance where we were testing unvaccinated people every day and vaccinated people once a week.

We’ve done what we call a strategic and targeted program, where we’re still testing unvaccinated daily but we’re no longer doing random surveillance testing. We’re targeting people with symptoms and asking them to come forward and be tested. I think that that has been a big success.

In a sport in which players are sometimes reticent to talk about injury or illness, is there risk in asking them to raise their hand to be tested?

Thankfully, we have seen players raise their hands. We went, for example, in the first two weeks of December when we had the old testing system, we had a comparison period the following two weeks when we went to this symptom-based testing strategy. We did about 75% of the same number of tests that we had done previously, which means that we’re still testing a lot of people.

The second big change in the era of Omicron has been in returning people after a positive test. Prior to the [Centers for Disease Control and Prevention‘s] last update, we were doing that on a test-based strategy. You were either out 10 days, or if you were vaccinated you could come back early if you had two negative tests that you could produce.

When the CDC updated their recommendations at the end of December we followed that. Now we’re allowing people to come back after five days if they have no symptoms and are cleared by their team physician, which does involve an in-person evaluation.

In the NFL, we’re actually seeing our caseload go down.

To what do you attribute that?

There’s several explanations for that. If you look at the data from the other countries that have been ahead of us, whether that be South Africa or in Europe, Omicron kind of came in like a tidal wave, then it tended to go out in somewhat rapid fashion as well. There has been this expectation that it hits hard but it may not be around for a long period of time.

Secondly, we’ve had a number of people who have had COVID over the last few weeks. They’re in the place of having some immunity now as the result of recent infection. Also, you have to remember that we’re an extremely heavily vaccinated and heavily boosted population.

Over 94% of our players, coaches and staff are vaccinated. Virtually 100% of our staff is vaccinated. If you look at us as an ecosystem and compare that to the general population, we’re much more vaccinated and boosted.

The Rams are 100% vaccinated yet a few weeks ago saw more than 30 players test positive for the virus. Did that spur any change in protocols?

I think it’s an aggregation of our experience across the league. We’re always monitoring all 32 of our clubs. We’re in discussions with public health authorities. We’re really looking at the situation across the league.

Now, is it certainly the case that sometimes different communities are at different stages? We’ve seen waves of disease hit certain communities. But our clubs have always tracked alongside with what our community rates have done. That just makes sense because our players, coaches and staff live in these communities. When they’re not in the building they’re going home to their families at night and they’re interacting socially in those communities.

So are there teams in regions that haven’t been hit hard yet?

No, I think everybody has been hit by the Omicron wave. There are just some communities, Los Angeles being one of those that definitely seemed to be on the early side of that.

What were some of the big lessons learned from last season?

The biggest one was that at the end of all of it, it really wasn’t the testing that kept us safe. What allowed us to be safe last season and to avoid spread of disease were the other mitigation measures. It was about the use of masks, virtual meetings, well-ventilated spaces.

We did not see very many cases where people were sick enough to go to the hospital, and we saw a very low rate of cardiac complications. That would be something that if you go back to March of 2020 when this all started everyone was very concerned about that because we just didn’t know. Our data was reassuring on that point.

The last thing from last season is we did not see outdoor, on-the-field transmission. We didn’t see the virus cross the line of scrimmage. I think those were important scientific lessons.

Was that last part surprising in a contact sport, that you didn’t see team-to-team transmission?

We’ve learned that it’s a respiratory virus that is transmitted through aerosolized droplets, mainly. If you think about spring of 2020, there was a lot of concern about surfaces and contaminated surfaces and things of that nature. As we’ve gone through the pandemic we’ve realized that those are just not major drivers of transmission. It’s really about these droplets.

Therefore ventilation and space really matters. I think that’s why we saw the outdoor environment be safe. You’re talking about dispersion of these droplets and currents of air flow. The open-air environment is really the safest place that one can be.

What about transmission in closed spaces?

If you think back to spring of 2020, it was all about six feet of distance and 15 minutes of time and we realized that those were very arbitrary cutoffs. You could ride in a car with somebody for two or three minutes and still have substantial exposure and substantial risk of testing positive.

How are the league’s findings helping inform policy and protocols for the rest of society?

One of the main things is we throughout have had regular and ongoing discussions with CDC, the White House Coronavirus Task Force, with state and local public health authorities. We’ve been very intentional and up front about sharing our data and what we’ve learned.

We published something with CDC last year as well as other scientific articles. We intend to do the same this year. We’ve really tried to use our experience to the benefit of the larger public health community.

Are you confident you can get through the playoffs and Super Bowl without any major problems?

I remain guardedly optimistic. I believe that we have a solid plan in place and we’ve shown that we can adapt and adjust as the data leads us. But we’ve also said that we’re always going to respond to the data and what it’s showing us, and we’re going to work with public health authorities and make sure that we’re respecting their directives and also supporting the messaging that needs to go out.

That’s the essence of what our entire pandemic response has been: How can we all pursue things that we love and enjoy, and yet stay safe at the same time? That’s been our mission.