No. 5 USC, still struggling to catch up, loses to visiting Oregon 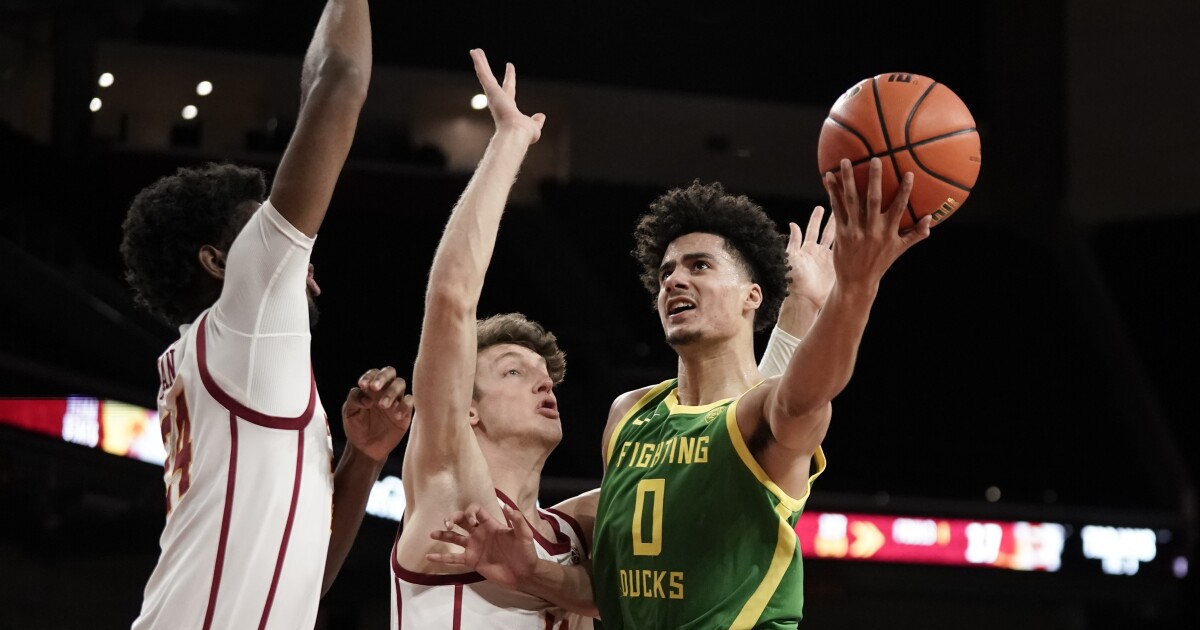 Another sluggish showing was slipping away, as Max Agbonkpolo burst into the lane in search of a spark. USC had struggled all night to stay with Oregon, which was flying high off its recent upset of UCLA. But there still was time to climb back when the USC forward came bounding through the paint with less than 10 minutes remaining Saturday, spotted Isaiah Mobley under the basket and let loose a lob toward the Trojans’ top scorer … who let it float untouched out of bounds.

On a night when everything felt out of sorts, it was a fittingly confusing scene. Little went right for fifth-ranked USC in a disorienting 79-69 loss to Oregon, its second in four games since returning from its 18-day COVID-19 pause.

Nothing has been easy since that layoff. Even victories over California and Oregon State were slogs until USC finally clamped down, letting its periodically dominant defense have the last word.

But there would be no such breakthrough Saturday, as Oregon (11-6, 4-2 Pac-12) soared throughout, refusing to bend whenever USC (14-2, 4-2) finally decided to get forceful with its defensive effort. Where USC shut down Oregon State late on Thursday, giving its offense enough time to push past the Beavers, Oregon just kept firing.

Amid a torrent of jumpers, it was Will Richardson doing the vast majority of the damage. The Ducks guard dominated from inside out, driving to the hoop with reckless abandon and sinking shot after shot from long range. Richardson finished with 28 points, including five three-pointers, as USC’s backcourt had no answer for Oregon’s lead scorer.

It had no answer inside or in transition either. The Trojans were outdone underneath and scored just three points on fast breaks, compared with the Ducks’ 15.

Four games back from their lengthy COVID-19 layoff, and here the Trojans still were dragging their feet. The defense that had been the backbone of their undefeated start now looked sluggish, as Oregon opened with a torrent of jumpers, hitting seven of its first 11 from deep. The balanced offensive attack that overwhelmed the opposition early in the season was now sporadic and inconsistent, left to jack up late three-pointers and scramble at the end of the shot clock.

Twice early on, USC was forced into shot-clock violations as Oregon’s defense swarmed the paint, leaving the Trojans unable to even get up a shot.

For the first half, Mobley and Boogie Ellis were the only two able to score consistently, left to carry the troubled Trojans largely on their own. Ellis hit four first-half three-pointers, shooting USC back into the game every time Oregon threatened to pull away. Mobley, meanwhile, scored seven of USC’s first 10 points, picking up where he left off Thursday night, when he came alive in the final minutes.

Both Mobley and Ellis finished with 18 points, but neither offered enough firepower to get USC back into a game that Oregon dominated.

After a standout performance that lifted USC on Thursday, senior forward Chevez Goodwin struggled in the follow-up, scoring seven points as Oregon big man N’Faly Dante dominated the paint, swatting any shot that came near. His presence alone was enough to disrupt USC’s efforts in the paint, where the Trojans managed 30 points, most of which came in the second half.

But that was hardly the only issue that plagued USC. And with two losses in their last three games, the Trojans have plenty to figure out before they take to the road again this week.