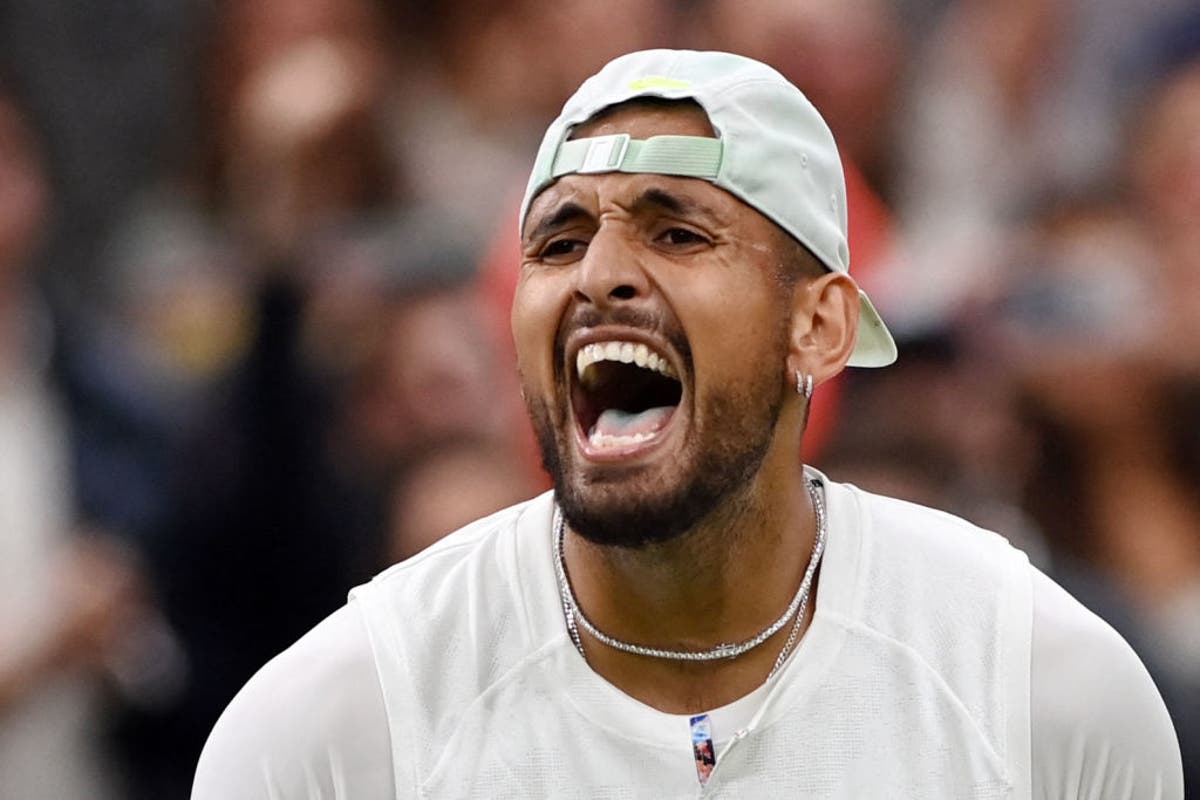 A third-round match between Nick Kyrgios and Stefanos Tsitsipas at Wimbledon was always going to be lively but few on Court One could have predicted even this to reach such explosive levels of unhinged drama and animosity.

As a measure of the hostility by the third set of this fractious affair, Tsitsipas had taken to aiming balls at Kyrgios, rather than attempting to pass his opponent at the net. He was lashing out after Kyrgios led, despite the Australian losing his focus in a tirade at the umpire, demanding for Tsitsipas to be disqualified for whacking a ball into the crowd. Kyrgios, so often the anti-villain of Wimbledon, had become Court One’s anti-hero, and between underarm serves, arguments, swearing and verbal abuse warnings, emerged with an impressive and thrilling 6-7 (2) 6-4 6-3 7-6 (8) victory in over three hours.

Although this match will not be remembered for the quality of its play, the level of tennis from Kyrgios at times was staggeringly high. He remains the sport’s greatest enigma but in the separate contest between his talent and temperament, it was his unique style and overwhelming serve that prevailed. Tsitsipas succumbed to the trap and it was the number four seed who lost his cool.

The fourth-set tiebreak under the lights on Court One brought the peak of the tension, even if the wave of the emotions had subdued. Kyrgios stood with two serves and then a match point to reach the fourth round, only for Tsitsipas to force him to save set point that would have forced a decider. At 6-6 in the tiebreak, Kyrgios produced two stunning points and sealed the win with an outstanding sliced drop shot.

We had already seen both sides of Kyrgios this tournament and the flashes of the ridiculous to the sublime in the opening rounds set up a blockbuster clash with Tsitsipas. It can be hard to decide what is more maddening: the on-court antics in the opening round that resulted in a £10,000 fine or the brilliance Kyrgios produced in his thrashing of Filip Kecmanovic where he was close to tennis perfection. It was a reminder of what remains a unique talent but the question remained whether Kyrgios could cool his emotions to deliver it on the big stage at a grand slam.

Tonight, that answer was an emphatic no, but it ultimately did not come as a detriment to his performance. It did not take long for the aggression to break out of what was a tight and closely fought opening set. For a moment, everything seemed to be fine in the Kyrgios universe. He started well and was matching Tsitsipas from the baseline. Among the flurry of winners from his racket there was the flash of an underarm tweener serve, with Kyrgios taking the point. Both had chances on the other’s dominant service games but as the first-set tiebreak loomed, it all changed.

Kyrgios protested with the umpire Damien Dumusois over a serve that was given long, beginning a long-running series of grumbles at the changeovers. “Why don’t you just get a new umpire,” he fumed, swearing at Dumusois . Kyrgios held to love to force the tiebreak but the focus had slipped. A double fault saw Kyrgios muttering at the back of the court as Tsitsipas, who was finding his best level, took the early lead.

Kyrgios did not win another point in the tiebreak following a stunning one-handed pass from Tsitsipas and a delay at the changeover as a line judge reported Kyrgios for swearing again at the back of the court. It further inflamed Kyrgios and two wild forehands over the line later Tsitsipas took a long opening set that until the final moments could have gone either way.

The second set followed the same pattern as the first, although with continued remonstrations from Kyrgios as he took his seat. He had a chance to break at 3-4 but put the forehand long and then put himself in trouble with a drop shot into the net that saw him face a break point from 40-0 up. Kyrgios, hurrying now, pounded the line with the audacious second-serve ace at 112 miles per hour, and a forehand winner into the corner wrapped up a remarkable hold.

Consecutive unforced errors from the Tsitsipas forehand brought up set point and as he came into the net a Kyrgios winner levelled the match at one set all, as the friction between the players reached boiling point.

Tsitsipas reacted by whacking a ball in frustration that flew off his racket and into the crowd. An exasperated Kyrgios, his rage rising, demanded for Tsitsipas to be defaulted and cited Novak Djokovic being thrown out of the US Open in 2020 after hitting a line judge. Kyrgios called on the tournament referee Gerry Armstrong and the arguments continued throughout the third set. “The amount of s**t this tournament is going to get after the game in the press conference is unreal,” Kyrgios moaned during the extraordinary outbursts.

Kyrgios maintained the backing of the Court One crowd and a forehand winner saw him break the Tsitsipas serve again to lead in the third. As Kyrgios held with an underarm serve, Tsitsipas skelped a forehand as hard as he could out of the court and was met with a points penalty for unsportsmanlike conduct. “I’m just trying to play tennis,” Tsitsipas protested and when a short ball from Kyrgios sat up at the net the Greek smacked a smash as hard as he could at Kyrgios.

Kyrgios, emerging now from the fume of his battle with the umpire, rediscovered his level and after he tickled the net cord with a sliced drop shot, took the third set with a crisp volley. He turned to the crowd and bowed, soaking in his ascendancy over the world number five.

It could have been wrapped up quickly after Kyrgios had four break points early in the fourth, but Tsitsipas regained his composure and as the Greek held to lead 3-2 it was Kyrgios bellowing at his box at the changeover. Kyrgios had further chances, and then saved the break himself at 3-4 as he somehow held from 0-40 down while gesturing sarcastically to his box.

The roof closing at 8:45pm added further tension and when play resumed Kyrgios was forced to save set point with a backhand winner. Tsitsipas added further pressure by Kyrgios responded with the ace to take it to a second tiebreak, where the levels of both players became absurdly high. Tsitsipas stood within moments of the fifth, but after all the frustrations of a heated encounter it was the tennis of Kyrgios that secured his progress.