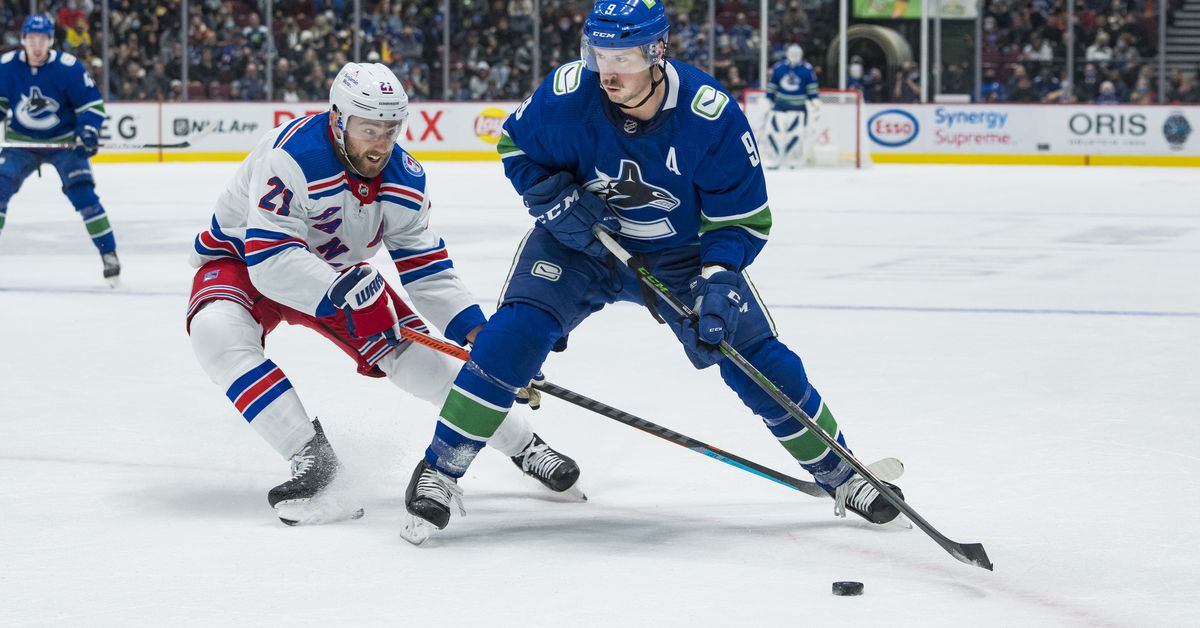 Miller and Vasily Podkolzin scored in the first 5:19 of the third while Conor Garland collected two assists for the Canucks.

Vancouver goaltender Thatcher Demko highlighted a 23-save performance with a diving skate save on Artemi Panarin with about 2 1/2 minutes remaining during a New York power play after losing his stick and pad during a scramble.

Freshly minted as Anaheim’s all-time leader in points, Ryan Getzlaf delivered a goal and two assists in an encore performance while leading a victory over visiting New Jersey.

Troy Terry added two goals to extend his NHL-best points streak to nine games as the Ducks won their second consecutive game after going winless in their previous six. Isac Lundestrom added a goal for Anaheim.

John Gibson made 28 saves for the Ducks in his first shutout of the season, while Jonathan Bernier had 23 saves for the Devils. New Jersey, which dropped the opener of a three-game California swing, has lost consecutive games for the first time this season.

Mitchell Marner added a goal and two assists for the Maple Leafs, who have won three games in a row, including the first two of a five-game homestand. William Nyander had a goal and an assist for Toronto, and Campbell made 26 saves to earn his fifth career shutout.

Robin Lehner stopped 29 shots for the Golden Knights, who had a three-game winning streak end in the opener of a four-game road trip.

Kirill Kaprizov scored at 2:02 of overtime and Minnesota snapped a two-game losing streak with a victory over Ottawa in Saint Paul, Minn.

Marcus Foligno scored two goals, the 10th multi-goal game of his career, and Calen Addison and Nico Sturm also scored goals for Minnesota, which improved to 3-0 in overtime this season. Cam Talbot finished with 24 saves.

Drake Batherson had a goal and an assist and Josh Norris, Nick Paul and Chris Tierney also scored goals for Ottawa, which lost its ninth consecutive game against the Wild. Michael Del Zotto added two assists while Filip Gustavsson stopped 38 of 43 shots.

Mark Scheifele returned after missing five games while in the COVID-19 protocol and scored the deciding goal of the shootout as Winnipeg defeated visiting Dallas.

Kyle Connor also scored in the shootout for Winnipeg, which has won five of its past six (5-0-1). Paul Stastny, Josh Morrissey and Pierre-Luc Dubois scored in regulation for the Jets, and Eric Comrie made 24 saves. Nate Schmidt had two assists.

Tyler Seguin had a goal and an assist and Jamie Benn and Jason Robertson scored in regulation for Dallas, which rallied from a 3-1 deficit to force overtime. Braden Holtby made 32 saves, including four in overtime.

Matt Duchene scored the overtime winner to cap a two-point performance that led visiting Nashville past Calgary for its fourth consecutive victory.

Claude Giroux and Sean Couturier had one goal and one assist apiece to lift host Philadelphia past winless Arizona. Scott Laughton added a goal for the Flyers, who produced all of the game’s goals in the third period.

Flyers goaltender Carter Hart earned the shutout with 29 saves. It was Hart’s third career shutout and first of the season.

Arizona goaltender Karel Vejmelka stopped 31 shots, but the Coyotes dropped to 0-9-1 this season.

Jake Allen made 22 saves for his second shutout of the year and Nick Suzuki had a goal and two assists as Montreal defeated visiting Detroit.

Brendan Gallagher had a goal and an assist while Tyler Toffoli contributed two assists. Josh Anderson also scored for the Canadiens.

Detroit goalie Alex Nedeljkovic stopped 38 of 40 shots, doing his best to keep the game within reach for his team. The Red Wings took their second shutout loss of the season, and they are 0-2-1 in their last three games.

Tomas Hertl had two goals and an assist for San Jose in a win over visiting Buffalo.

Mario Ferraro collected a goal and an assist, Jonathan Dahlen and Ryan Merkley also scored and Rudolfs Balcers had two assists for the Sharks, who have won two in a row. James Reimer made 25 saves.

Scottish Open: Viktor Hovland hits the course without his set of clubs