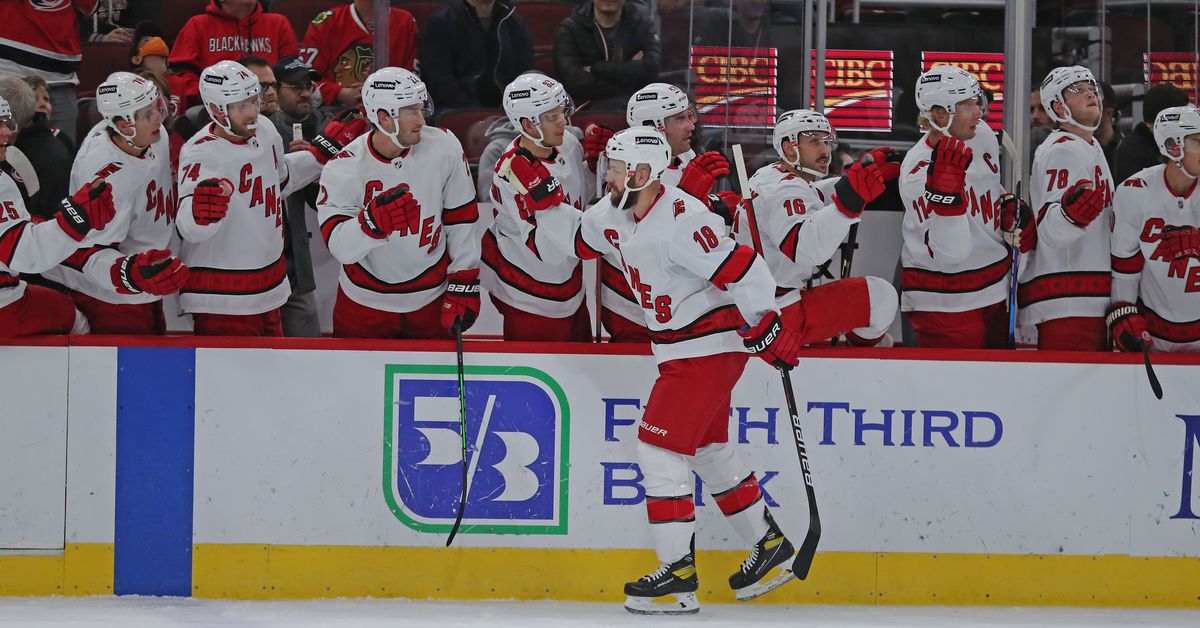 2021-11-04 07:00:48 GMT+00:00 – Derek Stepan tallied a goal and an assist and Andrei Svechnikov contributed two assists as the visiting Carolina Hurricanes rallied for a 4-3 victory against the Chicago Blackhawks on Wednesday night, stretching their season-opening winning streak to nine games.

After falling behind 3-1 with 11:36 remaining in the second period, the Hurricanes responded with three unanswered goals. Martin Necas netted the game-winner for Carolina at 3:26 of the third period, sneaking one past Chicago goaltender Marc-Andre Fleury, who allowed the puck to trickle out of his control.

Carolina killed three penalties after the go-ahead goal, including a four-minute high-sticking double-minor against Ethan Bear with 5:26 to go. Chicago was limited to an 0-for-5 showing on the power play overall. The Hurricanes outshot the Blackhawks 32-30. Frederik Anderson made 27 saves for Carolina en route to his eighth victory.

Alex DeBrincat scored twice and Patrick Kane had a goal and an assist for Chicago. Kane has collected six points over the past two contests after a four-game absence due to the NHL’s COVID-19 protocol.

Kailer Yamamoto, Devin Shore and Jesse Puljujarvi also scored for the Oilers, who received a 31-save performance from goaltender Mikko Koskinen to give the Western Conference leaders their eighth victory in nine outings and 18 points on the season, tied for most in the league. Ryan Nugent-Hopkins also collected two assists to give him a league-leading 13 helpers.

Matt Duchene and Ryan Johansen scored for Nashville, which was without top-line forward Filip Forsberg, who is out on a week-to-week basis after being injured during Tuesday’s game in Calgary. Goalie Connor Ingram stopped 25 shots as the Predators saw their four-game winning streak snapped.

Arthur Kaliyev and Adrian Kempe scored in the third period and also in the shootout to lift Los Angeles to a win against visiting St. Louis.

Jonathan Quick made 33 saves for the Kings, who won their third straight game following a 1-5-1 start.

St. Louis’ Torey Krug scored a short-handed goal with nine seconds left in regulation to send the game to overtime. Brayden Schenn also scored, and Jordan Binnington made 33 saves for the Blues, including eight in overtime. David Perron and Jordan Kyrou produced shootout goals for the Blues.

Jake Bean scored his second goal of the night 1:12 into overtime and Columbus edged host Colorado in Denver.

Bowen Byram had two goals and an assist for the Avalanche, who scored two late goals to force overtime. J.T. Compher and Logan O’Connor had a goal apiece and Gabriel Landeskog and Nazem Kadri each logged three assists. Colorado’s Jonas Johansson made 32 saves.