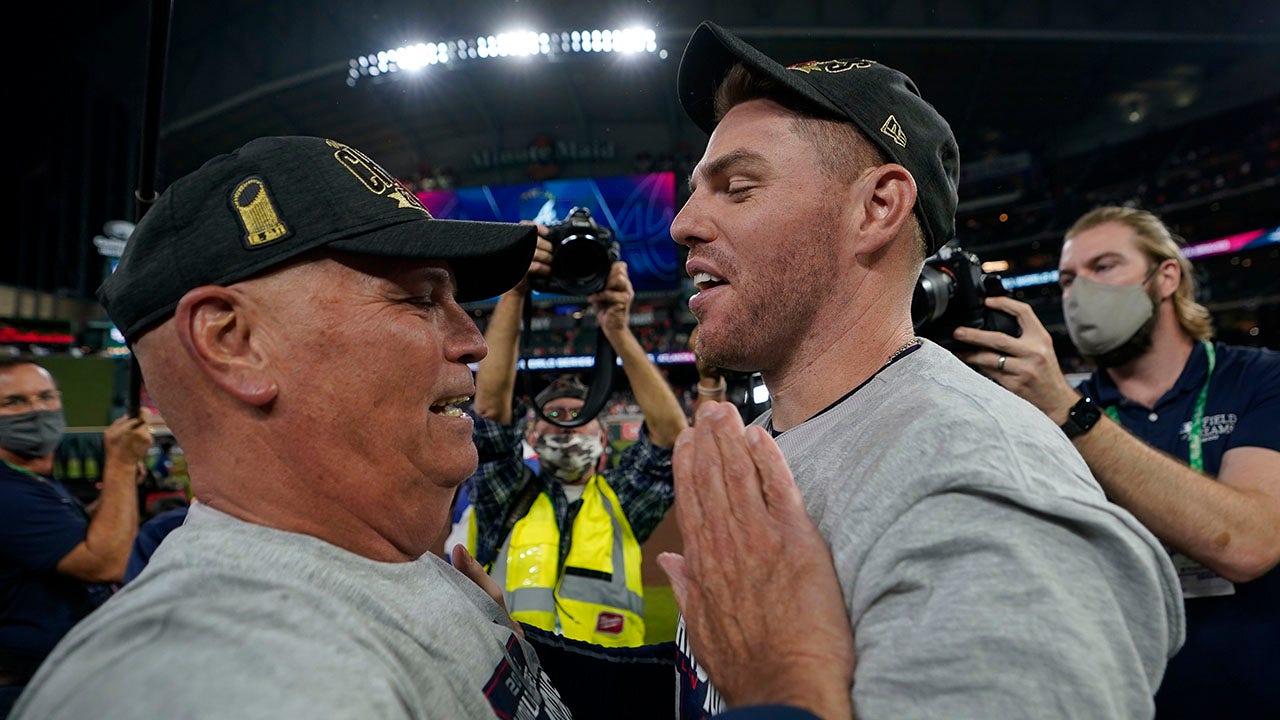 A celebration 26 years in the making was still going strong when a jarring dose of reality hit the Braves.

Has Freddie Freeman, the face of the franchise for the past decade, played his last game in an Atlanta uniform?

“Did I think I’d be sitting here with no contract? No I didn’t,” Freeman said after stopping by the Fox set during the postgame celebration in Houston, not long after catching a throw to first for the final out. “This is a crazy game, a crazy business. But everyone knows where my heart is. And that’s the Atlanta Braves.”

Freeman’s future is the most pressing offseason issue facing the Braves, who capped an improbable run to their first World Series title since 1995 with a 7-0 rout of the Houston Astros in Game 6 on Tuesday night.

It’s hard to envision the Braves defending the title they worked so hard to achieve without No. 5 at first base.

The Braves had hoped to lock up the 32-year-old Freeman to a long-term deal before they got to the end of the season, but the two sides have yet to agree on terms.

“I’ve been here since I was 17 years old. Almost half my life, I’ve been in this organization,” Freeman said. “It means everything to put on that Braves uniform every day. So hopefully I can continue to do that.”

Freeman’s uncertain status left the city with a bit of dread, even as it prepared for a Friday parade to toast Atlanta’s second championship in the four major American sports.

If Freeman re-signs. the Braves should be the favorites for a fifth straight NL East title and one of the top contenders for another Series championship.

Their most dynamic player, outfielder Ronald Acuña Jr., is expected to be fully recovered at some point during the first half of the 2022 season after going down in July with a season-ending knee injury.

Slugger Marcell Ozuna, who also missed most of the season after breaking his hand and then being arrested for allegedly attacking his wife during a domestic dispute, could return as well — most likely as a designated hitter if that rule, as expected, is adopted by both leagues.

Beyond Freeman, the rest of Atlanta’s dynamic infield — Ozzie Albies, Austin Riley and Dansby Swanson — is all locked up for next season. So are the top three starting pitchers — Charlie Morton, Max Fried and Ian Anderson — as well as the key figures in a bullpen that dominated the postseason: closer Will Smith and set-up men Tyler Matzek, A.J. Minter and Luke Jackson. Travis d’Arnaud will be back to catch them.

It’s a tight-knit group that the Braves would like to keep together as much as they can.

“Kind of the one thing that really sets us apart is how organically it’s been created, the love and compassion for one another and the friendships,” Swanson said. “It’s very real.”

There will be some injuries to keep an eye on heading to spring training in February.

Acuña, of course, as well as Morton, a 14-game winner who sustained a broken leg in Game 1 of the World Series.

Not to mention Mike Soroka, the team’s former ace, still only 24 but now a huge question mark after tearing his Achilles tendon for a second time.

Sadly, the four outfielders who played such a key role in the Braves’ success after being acquired ahead of the trade deadline could all be headed elsewhere in 2022.

The Braves could make a pitch for one of them to return to play alongside Acuña, but there likely won’t be room in the budget for more than that.

Once the celebration dies down, all eyes will turn to general manager Alex Anthopoulos, who missed the Series clincher after testing positive for COVID-19.

Anthopoulos pushed all the right buttons in the Braves’ run to the championship, and there’s every reason to believe he will assemble a roster capable of repeating in 2022.

The Braves don’t want to wait another 26 years for their next championship.

“Year after year, it never happened. This year it was improbable,” Freeman said. “We hit every pothole, every bump you could possibly hit this year, and somehow the car still made it onto the other side. It’s just an incredible group.”

Now the big question is: