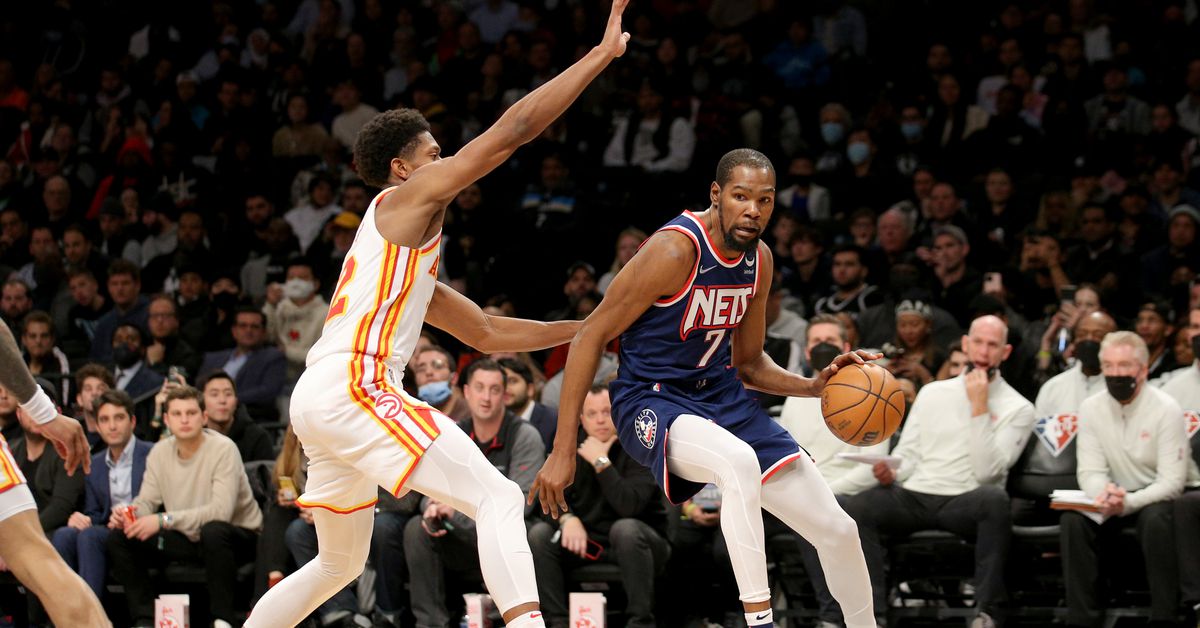 Durant also collected seven rebounds and five assists. Teammate James Harden followed up his first triple-double of the season with 16 points and 11 of Brooklyn’s 34 assists.

Joe Harris hit six 3-pointers and added 18 points to help the Nets head out on a six-game road trip with a three-game winning streak.

DeAndre Hunter hit a career-high six 3-pointers and scored 26 points, but Atlanta lost for the 11th time in the past 13 meetings against the Nets. Trae Young scored 11 points in the opening quarter and finished with 21 and 10 assists on 6-of-22 shooting from the floor.

Georges Niang also contributed 18 points, Tyrese Maxey added 14 and Furkan Korkmaz had 11 for the Sixers, who won their fourth in a row.

DeMar DeRozan led the Bulls with 37 points and 10 rebounds while Zach LaVine added 27. Lonzo Ball had 13 for the Bulls, who had won six of their first seven games entering the night.

OG Anunoby added 21 points and five rebounds for the Raptors, who have won five in a row and four straight on the road. Svi Mykhailiuk and Gary Trent Jr. added 15 points each for the Raptors.

Bradley Beal scored 25 points and added seven rebounds and seven assists for the Wizards, who have lost two in a row. Montrezl Harrell added 15 points and 10 rebounds for Washington.

Gary Payton II came off the bench to chip in with a season-high scoring total of his own, contributing 14 points and three steals to the Warriors’ sixth win in seven games to start the season. Stephen Curry and Damion Lee had 15 points apiece.

Miles Bridges poured in a game-high 32 points and Gordon Hayward scored 23 for the Hornets, who lost consecutive games for the first time this season.

Jaren Jackson Jr. scored 11 of his season-high 22 points in the fourth quarter as Memphis recorded its second consecutive win over visiting.

Jackson made five 3-pointers and grabbed eight rebounds for Memphis, which escaped with the win after Nikola Jokic’s 11-foot jump shot hit the front rim at the buzzer. Ja Morant recorded 18 points, six rebounds and six assists for the Grizzlies.

Jokic put up a season-high 34 points while adding 11 rebounds for Denver, which lost 106-97 in Memphis on Monday. Will Barton scored a season-high 26 points.

Jalen Brunson scored a season-high 31 points, including 13 of Dallas’ final 15 of the game, and grabbed 10 rebounds as the visiting Mavericks outlasted San Antonio.

Luka Doncic scored 23 points and pulled down 12 rebounds for Dallas. Tim Hardaway Jr. also had 23 points, and Boban Marjanovic hit for 17 off the bench.

Dejounte Murray led the Spurs with 23 points, with Devin Vassell scoring a career-high 21. San Antonio fell for the sixth time in the past seven games after Keldon Johnson committed a turnover in the final seconds.

Paul George finished with 32 points, six rebounds and eight assists as Los Angeles held on for a win over Minnesota in Minneapolis.

Reggie Jackson added 29 points and eight assists for the Clippers, who have earned back-to-back victories for the first time this season. Nicolas Batum scored 20 points on 7-for-10 shooting, including 6 of 8 from beyond the 3-point arc.

Myles Turner hit a career-high seven 3-pointers, including two to start a game-opening 11-point run by Indiana, which never trailed in a win over New York at Indianapolis.

The Pacers have won two straight following a four-game losing streak. The Knicks have dropped two in a row after a three-game winning streak.

Jarrett Allen collected 24 points and 17 rebounds to lead six Cleveland players in double-digit scoring as the Cavaliers kept Portland winless on the road.

Damian Lillard scored a season-high 26 points despite a 3-for-12 performance from 3-point range for the Blazers, who ended a three-game road trip winless and fell to 0-4 on the road.

Jaylen Brown paced four Boston players in double figures with a game-high 28 points as Boston ended a three-game losing streak with a win at Orlando.

The Celtics opened the third quarter with 16 straight points — creating a 21-0 run that spanned the middle periods — to take a 60-46 advantage. Jayson Tatum added 14 points for Boston, and Al Horford contributed 12 points and 12 rebounds.

Tyrese Haliburton added 20 points and De’Aaron Fox scored 19 for the Kings, who beat the Pelicans for the second time in six days.

Devonte’ Graham and Nickeil Alexander-Walker scored 16 points each while Jonas Valanciunas had 14 points and 11 rebounds for the Pelicans, who lost their fifth game in a row.