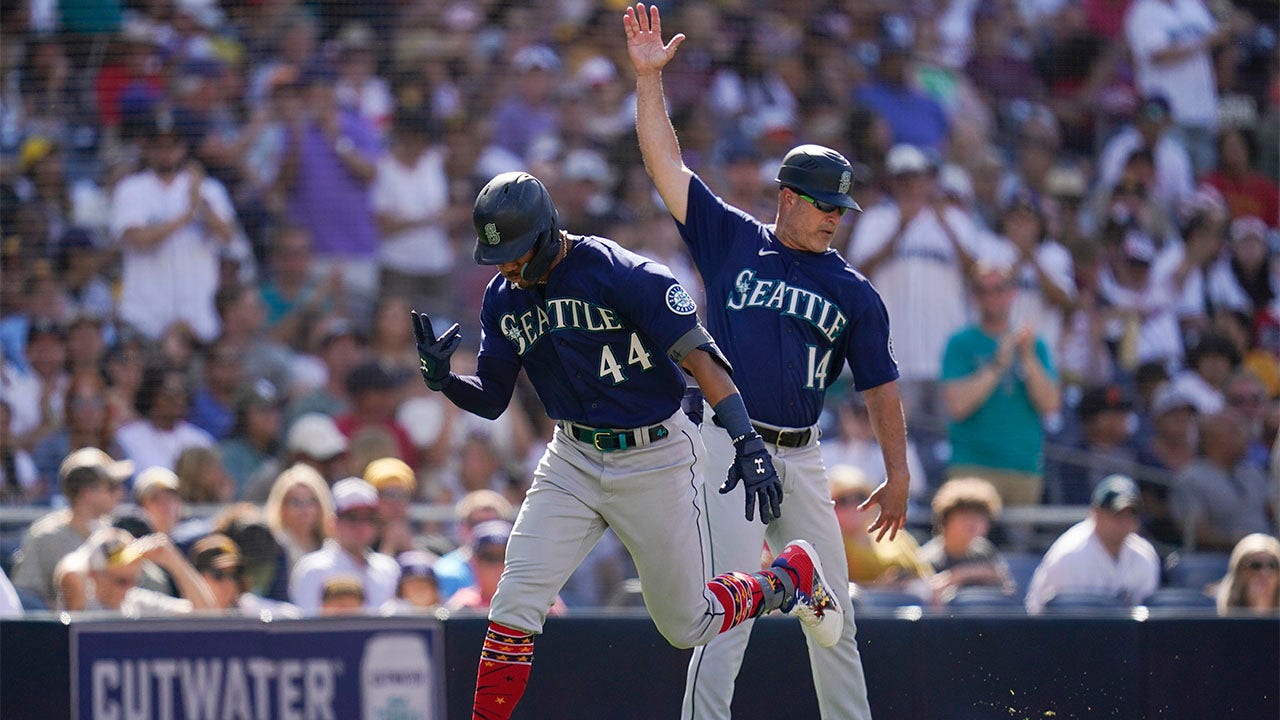 Julio Rodriguez sent a drive almost to the top of the brick warehouse in the left-field corner and pointed to the relievers in the bullpen who were also watching his monster two-run homer sail out of Petco Park.

“I thought it would be pretty cool to hit one up there but I wasn’t really like thinking about hitting it out there,” Rodriguez said after the Seattle Mariners beat the listless San Diego Padres 8-2 Monday.

The prized rookie said he was pointing to the bullpen “picking up the guys. They were looking that way from over there, so I was pointing at them. I just see it and hit it, I guess. That’s what I try to do every time I’m at the plate.”

Cal Raleigh drove in four runs — including a bases-clearing double — and Chris Flexen helped pitch the Mariners to their third straight win and sixth in seven games. The Padres gave their home fans little to cheer about on the holiday afternoon as they lost for the eighth time in 11 games.

The Mariners and Padres share a spring training complex in Peoria, Arizona, and have been deemed natural rivals by MLB for scheduling purposes.

Rodriguez drove a 2-0 pitch from left-hander Sean Manaea (3-4) onto the balcony of the fourth floor of the Western Metal Supply Co. warehouse with one out in the fourth inning to give the Mariners a 4-0 lead. It was his 15th homer this season and 12th in his last 40 games. Dylan Moore was aboard on a leadoff single.

Rodriguez became the first player in big league history with 15 home runs and 20 stolen bases in his first 81 games.

Asked if he could double those numbers, he said: “I’m honestly not setting a limit on that. I’m just playing ball every day. Taking care of one day at a time and whatever results come out at the end of the season, I’m going to take. But I’m just going to keep on going.”

Said manager Scott Servais: “Julio, what else do you need to say? Hits the ball almost over the warehouse here. … Big, big hits today, good offensive day against a really good ballclub.

“We haven’t had that complete of a game since the beginning of our last homestand,” Servais added. “Offense was huge early in the game, getting on Manaea early. Flex doing what he does, eight strikeouts today, really in control the entire time out there and had all his pitches working against a real good team.”

Flexen (5-8) and three relievers combined to shut down the Padres, who have scored only 10 runs in their last five games. They needed a ninth-inning rally to beat the NL West rival Los Angeles Dodgers 4-2 Sunday and avoid a four-game sweep.

San Diego didn’t score Monday until Trent Grisham hit a two-run homer with one out in the ninth.

Manaea followed Rodriguez’s homer by loading the bases and was replaced by Tayler Scott, who proceeded to retire five straight Mariners batters, including striking out the side in the fifth, before running into trouble in the sixth.

Rodriguez opened the inning by reaching on third baseman Manny Machado’s throwing error. J.P. Crawford singled and Carlos Santana walked for the third time to load the bases. Raleigh then doubled to the gap in right-center to clear the bases and make it 7-0.

Flexen didn’t allow a baserunner until he walked Machado with one out in the fourth. He was pulled after walking Kim Ha-seong with two outs in the seventh to put runners on first and third. Erik Swanson came on and walked Grisham to load the bases before getting Jurickson Profar to fly out.

The Mariners jumped on Manaea for two runs on three hits and a walk in the first. Raleigh drove in the first run with a grounder and Abraham Toro hit an RBI double.

Manaea allowed four runs and eight hits in 3 1/3 innings. He walked four and struck out three.

Mariners OF Jesse Winker began serving a six-game suspension for his part in a brawl with the Angels on June 26. His original penalty was seven games. Crawford returned to the lineup after serving a four-game suspension.

Mariners RHP Logan Gilbert (9-3, 2.26 ERA) and Padres RHP Mike Clevinger (2-0, 2.79) are scheduled to start Tuesday afternoon in the finale of the two-game series.