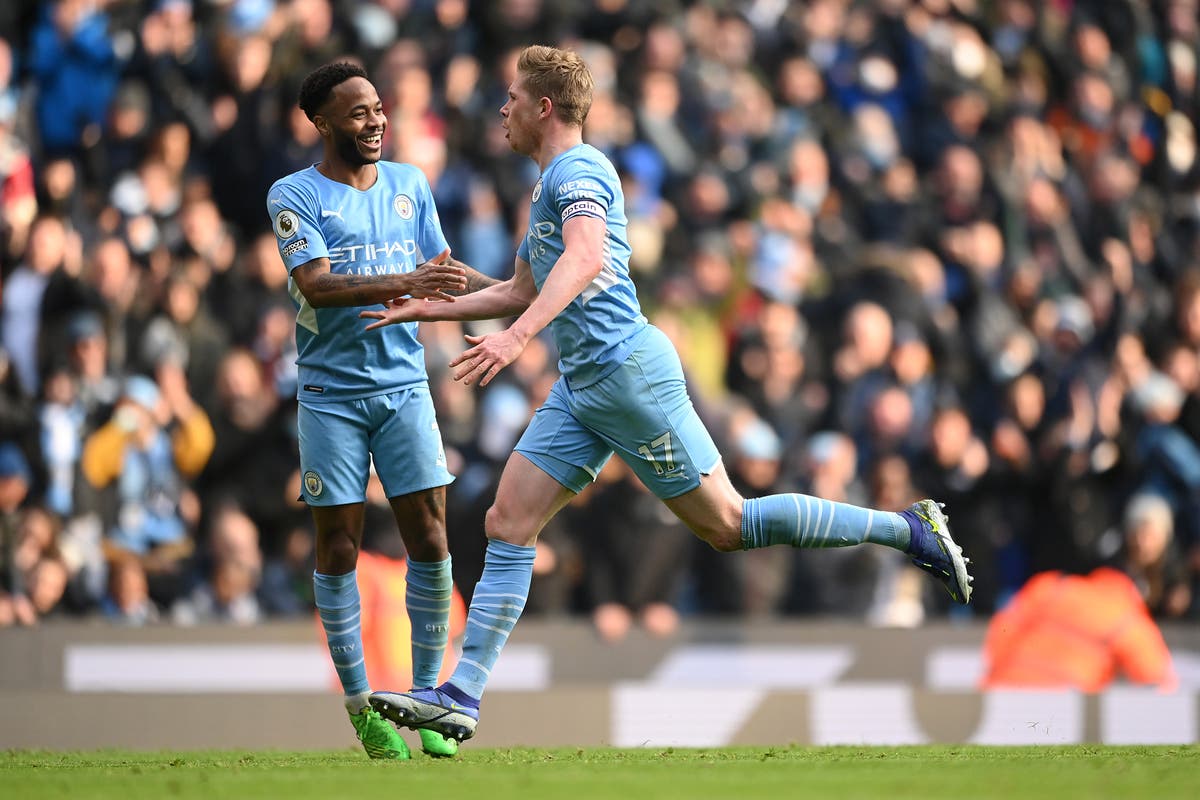 Manchester City have gone 13 points clear in the Premier League as they defeated Chelsea 1-0 thanks to a superb Kevin De Bruyne strike.

It was a game regarded as one Chelsea had to win as City are unlikely to drop many points for the rest of the season. But the Blues weren’t clinical enough in the final third.

In the first half, Raheem Sterling was causing a lot of issues but Chelsea’s defence, particularly through Antonio Rudiger and Thiago Silva, held strong.

Chelsea had dangerous counter attack but the final pass didn’t come off for the visitors angering manager Thomas Tuchel. The boss was seen shouting at his players and throwing his arms in the air.

Great chances for Jack Grealish and Romelu Lukaku on either side of half-time were saved well by their respective keepers to keep the game level.

However, the deadlock was broken by De Bruyne with a sensational strike for City to start sewing up their title defence.

Here are the player ratings from the Etihad Stadium:

The goalkeeper wasn’t given anything to contend with in first half. The lower rating reflects that as he couldn’t display what he could do in the first 45.

However, early in the second he made a spectacular save as Romelu Lukaku stuck.

Walker was solid but he didn’t do a lot to impact the game either.

The England star was offside in the second half which potentially meant a penalty call wasn’t taken to VAR for a foul on Sterling.

Stones returned from injury after missing four games and the early stages of the match showed his rustiness. He was out ran by Romelu Lukaku and it created a great chance for the Blues.

However, he grew into the match and almost scored a header from a corner.

Another City player who put in a solid performance but made no major impact in the first half.

He did defend a cross in from Ziyech well. Laporte made a great block to stop Azpilicueta from equalising.

He capitalised on a rogue ball in the box and created a good chance with his cross.

The full-back also was key in the build-up to De Bruyne’s goal.

The captain was amongst some of the best chances in the first half. He made a great run to create a huge opportunity and had a punt at goal but it was easily caught by Kepa.

He continued to be reliable in the set-pieces and put in a pin point free kick. De Bruyne added more great kicks as he forced Kepa to make a huge save from a free kick.

De Bruyne scored a blinder as he bent the ball round Kepa which earned him Man of the Match.

Silva put out a solid performance and continues to be a reliable player but with the other incredible outings he has played this season, it was an average game for the star.

He won a free kick just outside the box and was a part of the build-up attack play.

Sterling continued his phenomenal form. He looked deadly whenever he had the ball with good early runs and he caused a lot of issues for Chelsea’s defence.

The forward had a near-perfect performance, the only thing he was missing was a goal.

He kept up the press in the second half with a shot just wide and made a great run to feed Foden in front of goal.

He took a poor corner kick as the ball went too deep. However, he put good pressure on Kepa and put a great ball into the box but no City player was there to receive it.

Grealish had a frustrating first half as his attack was consistently shut down by Antonio Rudiger. The Chelsea man continued to stop the England star from making an impact.

Grealish found himself with the best chance of the first half with a clear shot at goal and a one on one with keeper Kepa. But he fumbled the huge chance in a position where he should have scored.

The Chelsea goalkeeper started the match shaky and nervous with a poor clear out off his shin leading to the first City corner of the match. However, he settled in and made some great saves.

He stopped a Stones header and did really well to deflect Grealish’s attempt. He made himself big in front of the England star which saw his thigh deflect the shot wide. Another fantastic stop came as he got a hand to a lightning De Bruyne free kick.

He did play the ball short a lot which stunted the Blues ball going forward. The keeper couldn’t do anything to stop De Bruyne’s strike.

One of Chelsea’s best players in the first half. He was stuck to Grealish around the box meaning all the attack created by the star ended back in Chelsea possession.

Rudiger was also a nuisance for other City players as he stopped a Cancelo cross and he also defended a great ball from De Bruyne.

In the opening 15 minutes his name wasn’t mentioned but he was working in the background. Silva was pulling the strings in defence with the aggressive swarming of City forwards keeping the hosts at bay.

He led from the back, keeping the defence tight and fast paced.

A player who grew into the game with the highlight of his performance being a perfectly timed tackle on Sterling. The move saw a promising attack play from the England international halted.

Azpilicueta was average in the match with his only impactful move coming with a good interception to halt City attack.

He was outplayed in the midfield which led to De Bruyne’s chance. misjudged a jump which gave Cancelo a chance to cross in the box.

Kante is usually a key player in the Chelsea set up but he wasn’t fed much ball throughout the match.

He should have dispossessed De Bruyne in the lead up to his goal.

Kovacic had good midfield play and defended well against Foden.

But he defence became too aggressive and was handed a yellow for foul on Bernardo Silva. After the card was shown to him his afternoon didn’t improve as a passing error from the star led to Grealish’s chance.

Alonso was handed an early yellow card for foul on Sterling. He managed to continue to defend against the impressive forward without getting a red.

Ziyech was at the heart of the first half chances for Chelsea but they weren’t clinical enough. He had a great chance but was offside and a bad pass to Lukaku saw another chance wasted, Tuchel visibly angry.

Lukaku had a frustrating first half and it started with him giving the ball away cheaply. He then passed to Ziyech in a great position when he should have shot himself.

He did continue to put himself in a good position but the ball wasn’t fed to him as much as he would like.

He had a good chance in the second half but Ederson made a great save to deny him.

Pulisic was average with no real impact. His first chance to make his mark on the match came on the edge of the box but he Delayed a cross in and was then ruled offside, another attacking chance wasted.