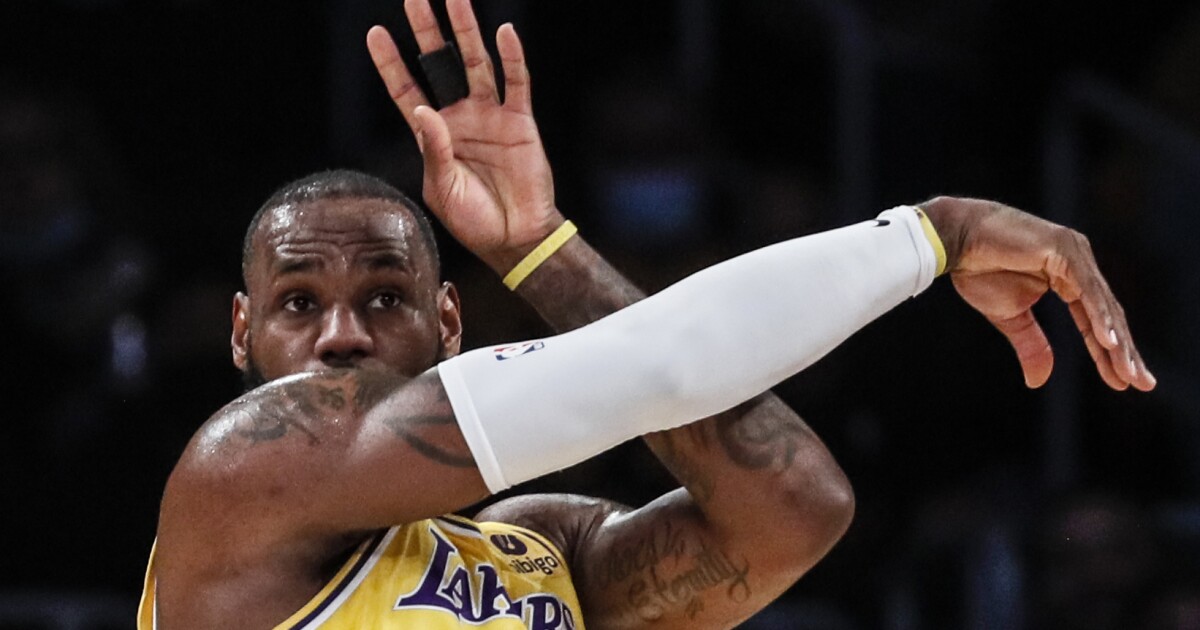 Here are five takeaways from the Lakers’ 119-117 win over the Houston Rockets on Tuesday night at Staples Center.

1. LeBron James had been called a “game-time decision” by Lakers coach Frank Vogel, but the forward knew he was going to play.

Hoop he did, leading the Lakers with 30 points and 10 assists.

After he went 13-for-21 from the field, James was asked about the tweet. He has been dealing with a sore right ankle that had him listed as questionable on the Lakers’ injury report.

“Umm, I just felt like I had a great 48 hours after the game on Sunday — as far as my preparation, as far as my ankle, as far as me getting back to feeling like myself,” James said. “And I was also happened to be watching the Monday night game, watching Pat Mahomes throw the ball sideways, on the side with defenders running at him, and also watching a bunch of NBA games as well at the same time. The competitive juices were overflowing, so that’s why I sent the tweet out.”

James scored 10 consecutive points during the fourth quarter, giving the Lakers a lead they never lost. He finished with 14 points in the fourth.

“It changed the game. If you’re looking for one reason why we won, that stretch is why,” Vogel said. “Our defense in the second half. And then him just really taking control of the offense during that stretch and forcing them into some timeouts and changing their defense and making subs. It really had them on the back of their heels.”

2. The Lakers surrendered 70 points in the first half, their defense nowhere to be found. They saw the Rockets make 58% of their first-half shots,, including 44.4% of their three-pointers.

The Lakers were better on defense in the second half, surrendering just 47 points on 46.3% shooting.

“Yeah, credit the Rockets, man,” Vogel said. “Those young guys came out and played their tails off. They responded to a tough loss the other night. They made every shot, attacked the rim, played with physicality, really challenged us. Our defense wasn’t good in the first half, but even when it was, they made tough shots. So, credit those guys.”

3. When Carmelo Anthony comes off the bench for the Lakers, he usually is instant offense.

He was exactly that Tuesday night.

Anthony had 15 points in 29 minutes 21 seconds. He was six-for-nine shooting from the field, three for five from three-point range.

4. The Lakers still have room from improvement at the free-throw line, although they made 75% (15 of 20) of them Tuesday night.

Malik Monk had a chance to give the Lakers a three-point lead with 6.6 seconds left, but he made just one of two.

5. DeAndre Jordan was solid during his minutes off the bench.

He had started the first six games at center, but Jordan has been a reserve the last two games, coming in when Davis, now the starting center, takes a rest.