LAFC’s playoff hopes dealt a blow after draw with Whitecaps 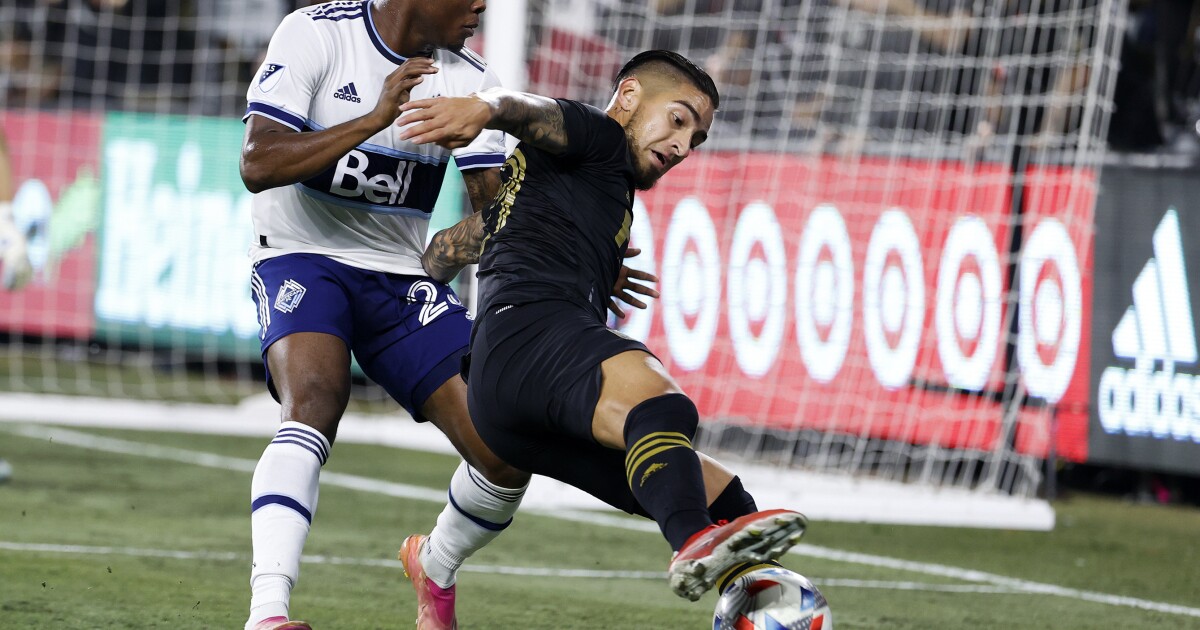 The scenario was simple for LAFC heading into the final week of the MLS regular season: win its final two games and the team goes to the playoffs. Anything short of that and well, it gets complicated.

Tuesday it got complicated, with LAFC and the Vancouver Whitecaps playing to a 1-1 draw at Banc of California Stadium, setting up a must-win game for LAFC in its season finale Sunday on the road against the Colorado Rapids.

Both goals came in the first half with Cristian Dájome scoring for Vancouver and Mamadou Fall matching that for LAFC deep in stoppage time.

The tie leaves LAFC ninth in the Western Conference standings, two places and two points out of a playoff berth. And the only path through is a narrow one.

LAFC would have to beat the Rapids on the road and at altitude, hope that Real Salt Lake wins neither of its final two games with Portland and Sporting Kansas City, and see the Galaxy lose or draw at home with Minnesota in their final match.

If all those things happen, LAFC would finish with 48 points and finish no worse than seventh, moving on to the postseason on a tiebreaker.

LAFC (12-12-9) could have avoided all that math with a win. Instead, the draw extended its unbeaten streak to a season-long six games while taking the team’s playoff chances out of its own hands, requiring it to get help to reach the postseason.

“I really liked the way we pushed the game. We just didn’t find a way to get another goal,” LAFC coach Bob Bradley said. “So now we’ve got to take the energy and the effort that we had tonight and be ready to go after it one more time in Colorado. Now we need a little bit of luck, we need a result or two to go our way. But it can’t stop us.

“We’re disappointed tonight because I think they felt that winner was there. But we’re going to go to Colorado with an understanding that we’ve got to do our job and hope we get a little bit of luck.”

LAFC has been in playoff position for just a day since mid-August and without that bit of luck it will miss the postseason for the first time in franchise history. Vancouver (12-9-12), meanwhile, has been on a tear, losing just twice in the last 21 games. As a result it will head into the final game of the year Sunday with a chance to clinch it first playoff berth since 2017.

Playing on a field left rough and rutted by a weekend music event, Vancouver broke in front in the 15th minute on a counter-attack goal from Dájome, his 10th of the season.

The sequence started with LAFC’s Raheem Edwards losing the ball at midfield. Brian White, who helped key the Whitecaps’ turnaround after coming over in a June trade from the New York Red Bulls, pushed it up the left wing before rolling a pass into the box and behind Dájome, who spun back to gather the ball, then sliced between defenders Sebastian Ibeagha and Jesús Murillo to bury a right-footed shot into the back of the net.

The deficit was just the second LAFC has faced in six games but it didn’t last until halftime, with Fall knocking in a loose ball that ricocheted off defender Florian Jungwirth in stoppage time. Referee Alex Chilowicz initially waved off the goal, but after consulting a video replay he let the score, which came on LAFC’s 13th shot of the half, stand.

LAFC, which outshot Vancouver 25-5, kept the pressure on to start the second half, forcing Whitecaps keeper Maxime Crépeau into two of his season-high 10 saves in the first five minutes. But it couldn’t get the ball past him, the best chance coming three minutes into stoppage time when Christian Arango failed to connect on a header in front of an open net.

Super Bowl 2023 commercials to watch for during the big game