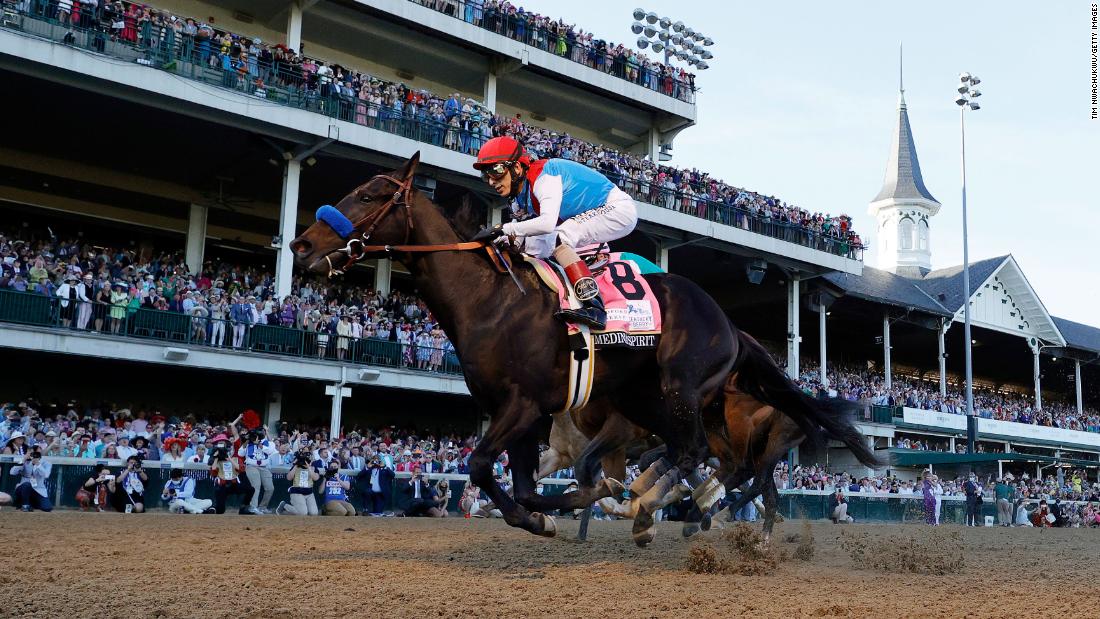 Hall of Fame trainer Bob Baffert revealed the test results Sunday, saying the 3-year-old colt tested positive for elevated levels of betamethasone, which is an anti-inflammatory corticosteroid and sometimes used to relieve joint pain in horses.

Betamethasone is allowed in horse racing in certain amounts, but Baffert said he’d been informed Medina Spirit’s postrace test detected 21 picograms per milliliter — more than double the allowed limit in Kentucky within 14 days of a race.

“I feel so bad not only for the horse, you know, but the owner, everybody involved, because this is something that, you know, we didn’t do,” Baffert told CNN’s Carolyn Manno on Monday, adding that he planned not to go to the Preakness Stakes on Saturday.

The test revelation came just over a week after Medina Spirit won the Kentucky Derby in Louisville, beating second-place Mandaloun by half a length. The win delivered Baffert a record seventh Derby victory.

A split sample from Medina Spirit’s postrace blood sample will now be tested, and if the original results are confirmed, Baffert will have a chance to appeal.

The time frame for receiving the results from a requested split sample averages four to eight weeks, but could take up to six months, according to the Kentucky Horse Racing Commission.

“Failure to comply with the rules and medication protocols jeopardizes the safety of the horses and jockeys, the integrity of our sport and the reputation of the Kentucky Derby and all who participate,” Churchill Downs said in a statement Sunday.

“We will await the conclusion of the Kentucky Horse Racing Commission’s investigation before taking further steps.”

Baffert denied Medina Spirit, who trained and raced in California before the Derby, has ever been treated with betamethasone and said his team will conduct its own investigation.

“The testing is it’s been really tough everywhere we go in California, and that’s why we have all these rules now that, there’s a lot of transparency,” he said. “They know everything we give them and we have to write it down, we turn it in. So they know every medication this horse has gotten and betamethasone is not one of them.

“And that’s the troubling part of it. He wasn’t administered that drug.”

He said he has no idea how the drug ended up in the horse’s system.

Horse race enthusiasts are keeping an eye on how this will impact Saturday’s Preakness Stakes. The race at Baltimore’s Pimlico Race Course is the second leg of horse racing’s Triple Crown.

Organizers said they will “review the relevant facts and information” related to Medina Spirit’s positive blood test and are consulting with the Maryland Racing Commission on any decision regarding the horse’s entry in the Preakness Stakes.

Baffert told CNN that as of Monday they were prepared to run the horse in Saturday’s race and the horse was at the time of the interview being transported from Kentucky to Maryland.

This is not Baffert’s first run-in with reports that his horse failed a drug test: Last month, according to multiple reports, including the Arkansas Democrat-Gazette, the Arkansas Racing Commission upheld a ruling that two of Baffert’s horses had tested positive for lidocaine beyond the accepted levels. However, the commission dropped a 15-day suspension for Baffert.

Baffert alluded to previous controversies on Sunday — “I don’t feel safe to train,” he said — but cast the allegation about Medina Spirit as an issue with the broader horse racing industry, saying the industry “needs to step up and we need to do a better job in racing.”

“I’m not a conspiracy (theorist) — I know everybody’s not out to get me. But there’s definitely something wrong. Why is it happening, you know, to me?” he asked. “There’s problems in racing, but it’s not Bob Baffert.”

He told CNN that he knew some people were enjoying him having to deal with negative publicity.

“I’ve had some success with all these great horses and, you know, there’s a lot of people that there’s a lot of jealousy and animosity out there,” he said. “And I understand that I have my critics. But this is really, you know, when it happens in the most prestigious race in America, the Kentucky Derby, Bob Baffert is not stupid.”

In 2009, Baffert was inducted into the sport’s Hall of Fame, which puts his number of thoroughbred wins at 3,120, with more than $320 million in purse earnings.
He became the 11th trainer to win the Triple Crown in 2015 when American Pharoah won the Kentucky Derby, the Preakness Stakes and the Belmont Stakes. He became only the second trainer to ever win the Triple Crown twice just a few years later with the horse Justify.

CNN’s Wayne Sterling and Steve Almasy contributed to this report.