Janja Garnbret: Olympic hopeful on her Tokyo dream and hopes for climbing in the future 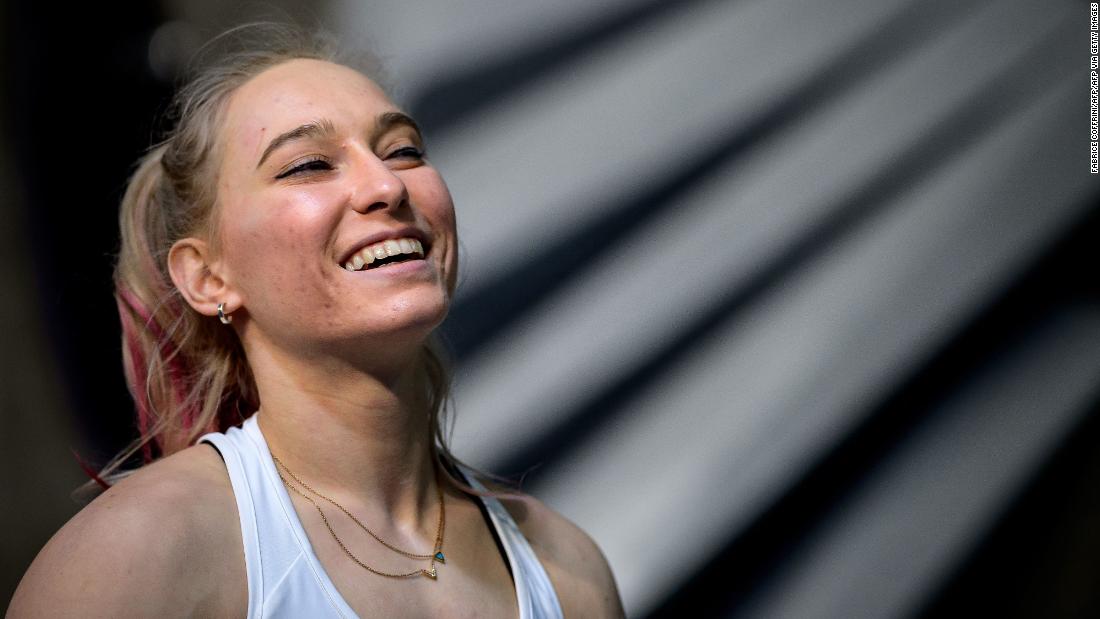 As a child growing up in Slovenia, she’d regularly be found racing up trees or scaling the door frames in her house, but it was on the climbing wall where she felt most at home and where her talent eventually shone through.

She came last in her category in her first competition as a child but says she loved the sport too much to care at that stage.

“People always ask me if I was ever comparing myself to other kids, I was actually not,” Garnbret, who recently scaled Europe’s tallest chimney, tells CNN Sport.

“I was just enjoying myself on the wall and I was just climbing, trying to push my limits. I never thought to myself that I am better than everyone else. I just enjoyed climbing.”

After a couple of years of practice and hard work, Garnbret quickly emerged as one of the best climbers in her country.

Her world-class ability then became evident as she entered international competitions and started winning them consistently.

She has gone on to win multiple World Cup events and has her eyes firmly on the postponed Tokyo Games which are set to finally go ahead this summer, which will see sport climbing make its Olympic debut.

‘I learned a lot about myself’

The 22-year-old says the initial postponement gave her more time to work on her weaknesses but admitted the uncertainty around the pandemic was difficult to get her head around.

She was fortunate enough to have a climbing wall at home, which she used to keep in good shape during her country’s lockdown, but she was tested in ways she hadn’t expected.

“I could train, but for me, it was hard because I was always the motivated person. I always had small goals and, of course, big goals and I never had fluctuations in motivation,” she says.

“I was always motivated but now it happened to me that I was motivated some days for training, some days not because every competition was postponed. I didn’t know myself like that.

“It was just something different and I learned a lot about myself, but I got used to the situation quite quickly.”

Organizers remain insistent that the Games will go ahead this year, but there is still an element of doubt that the pandemic could scupper plans once again.

Garnbret is trying to stay positive and is optimistic she’ll make her Olympic debut in 2021, despite the situation seemingly changing every week.

“I think Covid last year was just, of course, something new for us and we didn’t know what to expect, how to deal with it,” she adds.

“But we came prepared into this year with all safety precautions and everything. It’s still not a hundred percent, I completely understand that, but I will do my best and I will keep preparing for the Olympics.”

READ: The climbers aiming to boost diversity in the sport

Should sport climbing make its debut at this year’s Olympics, the competition will be run across three disciplines, each with their own techniques and format.

Bouldering involves navigating as many fixed routes as possible in four minutes on a four-meter high wall with no safety ropes. Lead climbing requires athletes to climb as high as possible on a 15-meter plus wall in six minutes using safety ropes, without reclimbs. Speed climbing has two climbers ascend a parallel route at the same time on a 15-meter wall set at 95 degrees — sometimes doing so in under 8 seconds. Combined results will determine medalists.

Garnbret says speed climbing is by far her weakest discipline but has a thorough training schedule in place to improve every aspect of her performance.

She trains six days a week, splitting her time between gym work, speed climbing and her usual wall training. Due to a lack of centralized facilities in Slovenia, Garnbret often drives up to four hours a day to attend all her sessions.

It’s a regime that requires determination, passion and a tireless work ethic but winning a gold medal would make it all worthwhile.

“I definitely know that every girl will take that extra year to their benefit,” she says. “I know every girl has her eyes set on the gold.”

“I can’t say that I will win the gold because I know everyone will be 100% prepared for that.

“I will definitely keep training and I will be prepared as much as possible when the time comes and then we will see what will happen. But, definitely, I’m looking forward to it.”

While other athletes will be backed by wealthy sponsors and a team of sport scientists at this year’s Olympics, Garnbret knows climbing is not quite at that level.

The Slovenian hopes the opportunity to compete in front of a global audience will go some way towards changing that.

“I think it will be really beneficial to climbing because climbing is still a young sport. It’s super young,” she says.

“So it’s definitely a huge playground for everyone, for sponsors, for some non-endemic sponsors that are still yet to come into our sport. That’s definitely something huge.”

Due to her success, Garnbret is already a role model to young climbers across the world, and she hopes she can drive the charge for better facilities in her own country.

She also wants to boost a healthy image of the sport, which she says is more important than anything.

Garnbret says the demands of climbing have led to youngsters, especially girls, trying to get lighter. This has, she says, sometimes led to people developing eating disorders in the bid for better results.

She now wants to use her platform to show the next generation of climbers that maintaining a healthy lifestyle can translate into success.

“I just want to set a good example in that you don’t need to lose extra weight to be successful,” she says.

“I definitely feel responsible for our sport. I just want to represent climbing as a fun sport, that it’s always fun, you have to just climb up and enjoy yourself.”

She continues: “I remember I fell in love […] the first time that I tried climbing because it felt so weightless, and it was just me and the wall. I remember that I was the only kid who stayed on the wall and didn’t want to come off.”