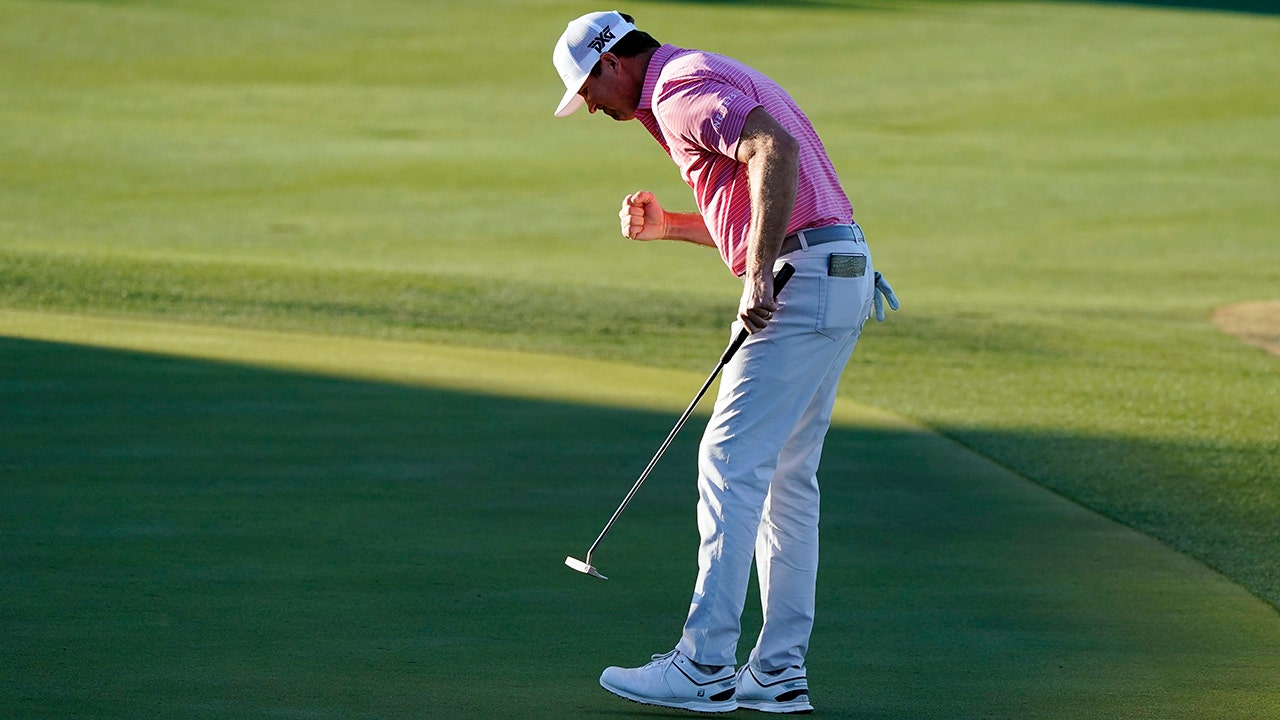 Hudson Swafford thought about his late father Sunday at PGA West in his second victory in The American Express in five years.

“One of the best people I know and he taught me everything I know,” Swafford said. “How to be a dad, how to be a friend, how to be a champion and how to play golf. He’s the one that got me into golf when I was young. He gave me every opportunity to succeed, but never pushed it on me.”

Hudson Swafford pumps his fist after making a putt for par on the 18th hole during the final round of the American Express golf tournament on the Pete Dye Stadium Course at PGA West, Sunday, Jan. 23, 2022, in La Quinta, Calif.
(AP Photo/Marcio Jose Sanchez)

Swafford broke a late tie with an eagle in an 8-under 64 on the Stadium Course. He beat Tom Hoge by two strokes after beginning the day three strokes behind rookies Lee Hodges and Paul Barjon.

“I’ve fallen in love with this place,” Swafford said. “This is kind of my West Coast home, honestly.”

Tied for the lead with Brian Harman and Francesco Molinari at 20 under, Swafford pulled ahead with the eagle on the par-5 16th. From about 200 yards, he hit a 7-iron to 8 feet on the iconic hole with large, deep bunkers lining the left side.

“A little down breeze and it was just a perfect 7-iron,” Swafford said. “I knew if I missed it a little bit it was going to come up just short, just where you wanted to be, and if I hit it good and hit it solid, then I was going to have a really good chance at eagle.”

Swafford ran in a 20-foot birdie putt on 17, a par-3 hole called Alcatraz with an island green ringed by jagged rocks. He saved par on the par-4 18th with an 8-footer to wrap up a spot in the Masters.

“Just knew to keep my head down and hit one last solid putt and did that and it went right in,” Swafford said.

The 34-year-old from Tallahassee, Florida, finished at 23-under 265 in the three-course event for his third PGA Tour title. He also won in the desert in 2017 and took the 2020 Corales Puntacana Resort & Club Championship in the Dominican Republic.

“Hud’s a great player and I think that it just sets up great for him,” Harman said about his fellow Georgia alum. “Hud’s good anywhere. He hits it far and when he gets putting and chipping it good he’s hard to beat.”

Hoge shot a 68. He missed a chance to win his first title in his 201st start.

Fourth-ranked Patrick Cantaly, the second-round leader at 14 under, followed at 18 under after a 68. The FedEx Cup champion was trying to win for the third time in his last four starts.

Barjon, the Frenchman who played alongside close friend Hodges all four days, had a 73 to finish at 17 under. He also was making his 14th tour start.

Swafford had six birdies in an eight-hole stretch to take the lead with six holes left. He followed a three-putt bogey on the par-3 13th with a birdie on the par-4 14th for a two-stroke lead.

But he didn’t make it easy, dropping a stroke on the par-4 15th to fall into a tie with Harman, with Molinari soon joining them with a birdie on 16 in the group ahead of Swafford.

With the wind gusting in the morning, Swafford opened with a bogey. He got the stroke back with a birdie on the second, took the lead with the big birdie run and celebrated an emotional victory.

“To get a W while he’s pushing me from above, it’s so special,” Swafford said about his father.