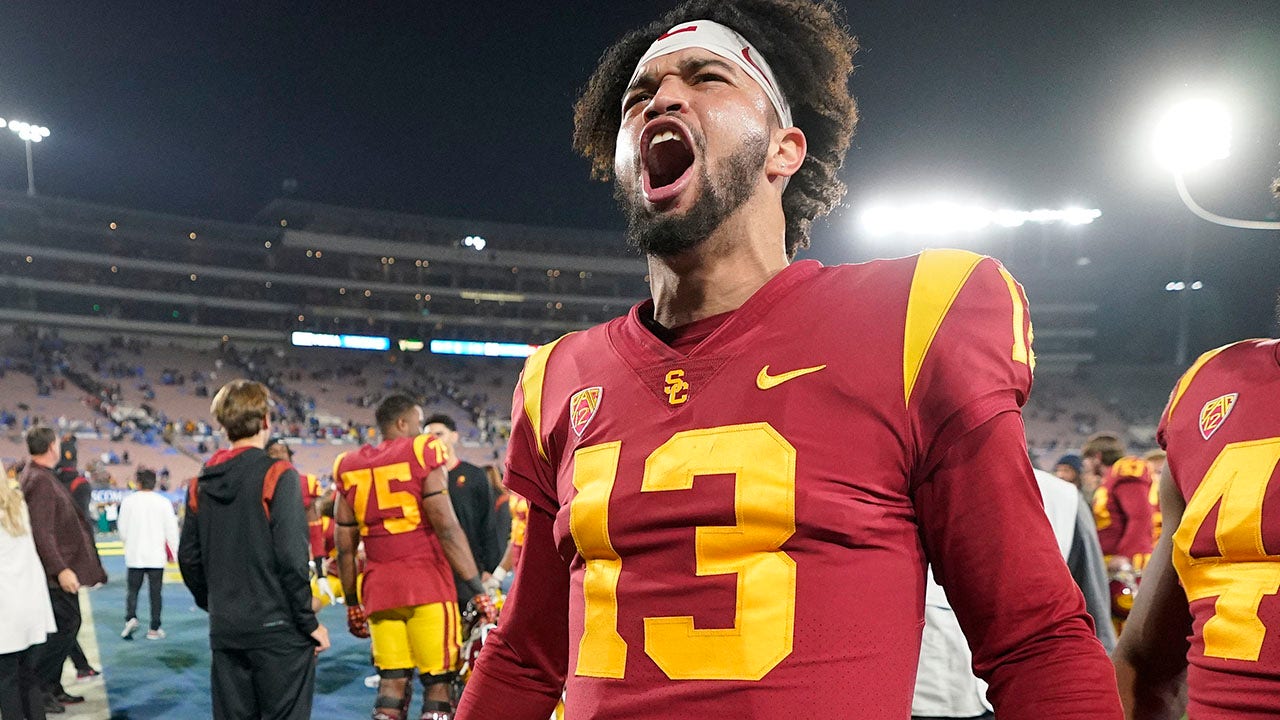 The Heisman Trophy finalists have been named, as quarterbacks USC’s Caleb Williams, Georgia’s Stetson Bennett, TCU’s Max Duggan and Ohio State’s C.J. Stroud will head to New York to hear who will be announced as the winner.

The favorite of the four is Williams despite losing to Utah in the Pac-12 Championship this past weekend, eliminating them from the College Football playoff.

In his first season with the Trojans after following his former Oklahoma head coach Lincoln Riley to sunny California, Williams has passed for 4,075 yards, with his 37 touchdowns tied for the most in the country.

Max Duggan of the TCU Horned Frogs carries the ball against the Kansas State Wildcats in the second half of the Big 12 Football Championship on December 3, 2022, in Arlington, Texas.
(Ron Jenkins/Getty Images)

As a true sophomore, Williams will have to play another college season before heading to the NFL, but he has many teams on watch this year as USC heads to the Cotton Bowl to face Tulane on Jan. 2.

Bennett, Duggan and Stroud, though, will be in the College Football Playoff, with Bennett leading the Georgia Bulldogs to the top seed in the country.

Bennett has thrown for 3,425 yards with 20 touchdowns to six interceptions in 13 games for Georgia, as he’s looking for back-to-back national titles after defeating Alabama last year.

Duggan is the surprise in this group just like the Horned Frogs have been this season, though they lost to Kansas State in the Big 12 Championship in overtime.

Stetson Bennett of the Georgia Bulldogs celebrates after defeating the LSU Tigers in the SEC Championship game at Mercedes-Benz Stadium on December 3, 2022, in Atlanta.
(Kevin C. Cox/Getty Images)

Duggan has had his best college season to date with 3,321 passing yards with 30 touchdowns to four interceptions with a 64.9% completion rate in 13 games.

Finally, Stroud was a Heisman favorite to start the season after winning the award last year with 4,435 yards and 44 touchdowns thrown for the Buckeyes.

Stroud is still considered one of the top NFL Draft prospects if he decides to declare.

Bennett and Stroud will be going against each other in the Peach Bowl on Dec. 31 to determine who heads to the national championship game. Duggan’s Horned Frogs will face the Michigan Wolverines in the Fiesta Bowl.

The Heisman Trophy will be presented this Saturday at 8 p.m. ET in New York.