Have teams figured out how to stop Chargers’ Justin Herbert? 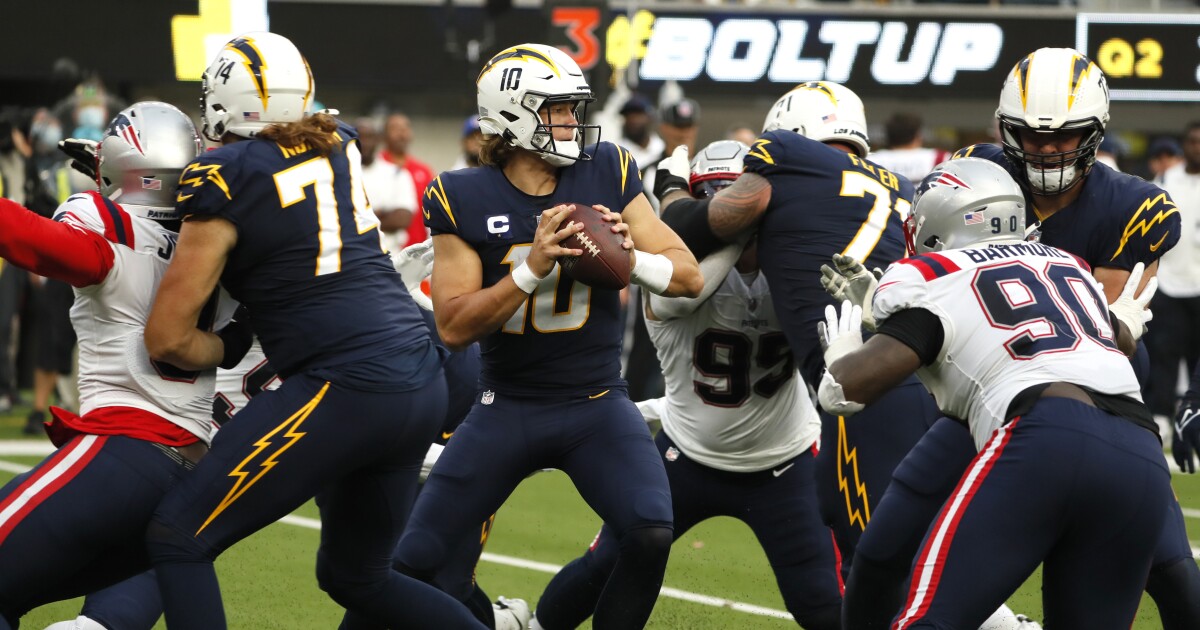 Chargers coach Brandon Staley insisted he wasn’t concerned that his team’s formerly flashy, high-powered offense was erratic and sometimes stalled during its 27-24 loss to the New England Patriots on Sunday at SoFi Stadium, which gave him his first two-game losing streak as the team’s head coach.

Maybe he should be bothered. Two losses don’t make a pattern, but the way the Chargers lost is enough to demand serious film watching that leads to some creative solutions before they face the Eagles next Sunday at Philadelphia.

Getting a week off after their 34-6 blowout loss at Baltimore didn’t do anything for the Chargers’ passing game Sunday, and that played into the Patriots’ eager hands.

New England was willing to give up yards on the ground — the Chargers’ 163 yards rushing was their second-highest total this season — but Bill Belichick’s team focused on third-down situations and effectively eliminated big passing plays.

“What we have to do a better job of on early downs is getting in rhythm, staying on schedule, getting the explosive plays, mixing the run and the pass, moving the pocket, and if we can do that then we can be a dangerous offensive football team,” Staley said.

A late push capped by a 24-yard touchdown pass from Justin Herbert to rookie wide receiver Joshua Palmer padded Herbert’s passing yards by 80 for a total of 223, including two touchdown passes. But he was intercepted twice by former Chargers safety Adrian Phillips, once for a touchdown early in the fourth quarter that put New England ahead for good at 24-17. At Baltimore two weeks ago, Herbert passed for 195 yards, the second-lowest total of his young career, and was intercepted once.

Herbert, who was so impressively poised while helping lead the Chargers to four wins in their first five games, said he didn’t know if opponents have begun to figure him out as he gets deeper into his second NFL season.

But he has shown in the Chargers’ last two games he still has a lot to figure out when it comes to conquering tricky defenses.

On Sunday, the key for him was to find other options in the face of the Patriots’ zone coverage. Staley said he saw some protection issues, but Herbert said he didn’t feel rushed, though he planned to review that when he watches the game film.

“I felt like they gave me enough time,” he said. “It’s on me to make those throws and to get the ball up quicker, but I thought those guys up front did a good job blocking and I feel comfortable behind those guys.”

But in situations that called for patience and discipline — a phrase Staley uttered three times in a row, for emphasis — Herbert sometimes fell short. And he knew it.

“If the defense drops everyone out and nothing’s open downfield, you have to find your checkdown. You have to take off, you have to find four or five yards however you can get it,” he said. “But that’s just the tough part about playing quarterback. And something I have to keep learning.”

Wide receiver Keenan Allen blamed the loss on the Chargers sabotaging themselves. That was true but wasn’t the complete story. He cited dropped passes and penalties as a cause, though the Chargers were called for only five penalties for 40 yards.

“We shouldn’t have lost, for sure,” Allen said. “I thought the Ravens did a damned good job. Today it was all us. I didn’t see anything that [the Patriots] did that we couldn’t understand what was going on. I didn’t think any of it was anything.”

But it added up to something the Chargers couldn’t handle. Asked what they must clean up, Allen replied, “Good question. I don’t have the answer.

“The frustration for me is just every year. It’s the same thing every year. Beating ourselves. Same thing. Frustrating.”

This isn’t the same team or the same coach, so it’s easy to think Allen was merely venting while the sting of defeat felt fresh. And the Chargers did get valuable contributions from their running game, which Staley considered important.

“We need to make sure that we continue to improve in that aspect,” he said, “because when all you’re doing is dropping back to throw, it’s hard to do that consistently in this league because very few people in the NFL can protect the passer when it’s a known pass. Very few people can, and I think that’s the big takeaway from today’s game.”