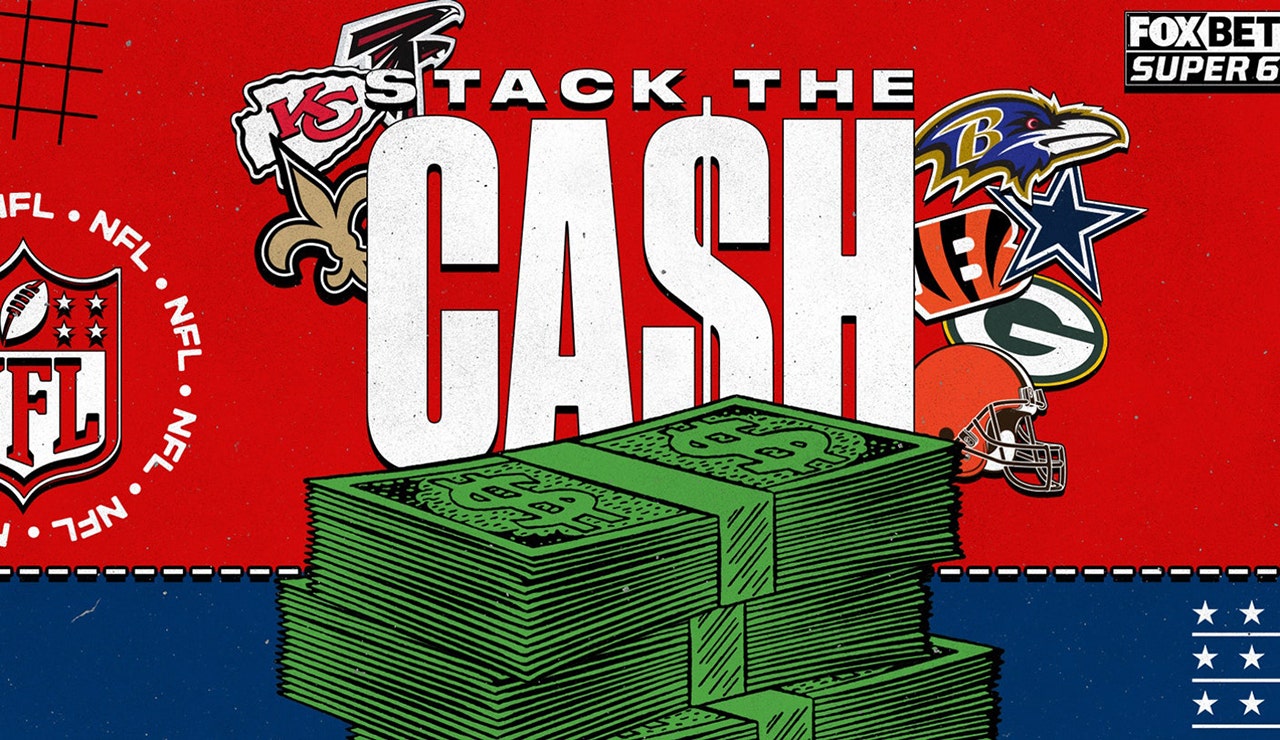 NFL Week 9 has been a wild one already, and we haven’t even gotten to the games!

Between the drama in Cleveland, a medical update in Green Bay and all the usual news and notes around the league, lines have been on the move early. It makes predicting how the games will play out all the more challenging, but sometimes, that’s half the fun!

And speaking of fun, you could win big yourself on Sunday with the FOX Bet Super 6 NFL “Stack the Cash” contest, where the jackpot gets richer and richer as more people enter!

Last week, for example, the “Stack the Cash” grand prize grew to over $300,000 from its original starting point of $100,000. And this week, we’re hoping that fans like you can help FOX Bet Super 6 give away even more money!

All you have to do is download the FOX Bet Super 6 app, enter Sunday’s NFL Challenge and predict which teams will win and by how many points in six of Sunday’s games. If you’re right, you could win this week’s “Stack the Cash” jackpot and join the list of FOX Bet Super 6 winners who have claimed more than $5 million in prizes.

Then, once you’ve entered — or if you already have! — keep spreading the word. Remember, every new entry helps grow the prize pool. The Week 9 jackpot is well on its way to $200,000, but we’d like to see twice as much cash up for grabs. So tell your friends, family and neighbors to keep joining the contest for an even bigger prize for all of you to potentially win. Just download and play today!

To help you get to the pay window, here are my thoughts on this week’s Super 6 games, with all NFL odds via FOX Bet.

You have to wonder if the Von Miller trade — he was the last defensive starter from the Super Bowl winning team — negatively impacts the team’s mindset for the remainder of the season. There was no fire sale, but injuries have decimated the linebackers, and the pass rush is toothless without Miller or Bradley Chubb (injured).

The Broncos are going to need at least 21 points to keep up with Dallas, and the Broncos have topped 20 points just once in the past five games. Even if Jerry Jeudy returns, what offense is there outside Courtland Sutton, who will likely be blanketed by Trevon Diggs?

The Cowboys stunned the Vikings with the immortal Cooper Rush outplaying Kirk Cousins badly in the second half last week and stealing a road win. Rookie LB Micah Parsons, despite not playing in college football last year, has been a beast, placing second in sacks and first in tackles for loss on the team, while being second in tackles.

Based on early line movement in this one — from 7.5 to 10 — it seems like Dak Prescott will play. Even if he’s a tad rusty, the Cowboys still have one of the most explosive offenses in the NFL, although they will be without tackle Tyron Smith (ankle). PICK: Cowboys to win by 7-9 points

This is a rare battle of the teams ranked first (Minnesota) and third (Baltimore) in defensive pressure rate, although the Vikings are going to have to manufacture something this week after the pec injury to Danielle Hunter, who leads the team in sacks and tackles for loss.

Kirk Cousins was a woeful 6-for-15 for just 29 yards under pressure in the loss to Dallas, and now he faces a Ravens defense that was torched by Joe Burrow for 41 points. Think they’ll be motivated? The Vikings fall into the category of bad as a favorite (1-3 against the spread) but dangerous as an underdog (2-0 ATS).

But remember — no team is as good or as bad as they were the week before.

This is a fourth straight home game for Baltimore (with a bye sandwiched in), and this is typically a spot in which Baltimore rips an opponent to shreds. John Harbaugh is 9-4 ATS off the bye and 4-0 with Lamar Jackson. PICK: Ravens to win by 3-4 points

We tried to warn you last week about the Falcons. Just when you think you can trust them, they lay a massive egg at home, posting only 213 yards of offense (4.3 yards per play!) versus the struggling Panthers. They got to the red zone once. With Calvin Ridley stepping away from football, the Falcons’ only passing threat is rookie Kyle Pitts; good luck getting loose against a nasty Saints defense that hasn’t allowed a touchdown to tight ends this season.

This feels like a very low-scoring game, as New Orleans will probably toggle between Taysom Hill (coming off a concussion) and Trevor Siemien. First to 17 probably wins, and given the Saints defense, New Orleans might get all those points by itself. PICK: Saints to win by 5-6 points

These in-state rivals played two high-scoring games last year, with the Browns winning both but not covering. Cleveland is reeling, from the Odell Beckham drama to massive injuries to three losses in four games. Nobody is going to back the Browns here, as they have failed to cover in the last four games.

But the Bengals woke up from their 5-2 dream Sunday with a stunning loss to the lowly Jets. By point spread (10.5), it was the largest upset this season. The Bengals led by 11 with eight minutes left and lost by a field goal, allowing the Jets to pick up the most first downs the franchise has had (32) in over three decades.

There are troubling signs for Cincinnati, starting with Joe Burrow’s NFL-leading five interceptions in the 4th quarter. The Browns lead the NFL in rushing defense (3.5 yards per attempts) and if Joe Mixon can’t get loose, Sunday could be a long day for the Bengals. PICK: Browns to win by 3-4 points

Houston played like a team that has quit last week, falling behind the Rams 38-0. Now they have to go on the road, where in the last three travel spots they’ve been outscored 122-8.

Yes, the Texans are the worst team in the NFL — but the Dolphins are headed their way.

Miami’s offense has been reduced to dink and dunk, as the dreadful offensive line can’t protect Tua Tagovailoa. He’s averaging a paltry 6.6 yards per attempt, which ranks 26th in the NFL. The Texans rank 30th in run defense (4.8 yards per carry allowed), but it’s unclear if the Dolphins can take advantage, as their leading rusher, Myles Gaskin (279 yards), has more fumbles (1) than TDs (0).

The Dolphins’ defense, which is what coach Brian Flores was known form is blitzing at the second-highest rate in the NFL (93%), but it’s ineffective, because they’re only 18th in pressure rate. That’s leaving their cornerbacks on an island, and Xavien Howard and Byron Jones have struggled badly this year. If Miami can’t get off the field on third down (second-worst at stopping the opposition), maybe Houston makes this interesting. Maybe.

Then again, the Rams were able to get to the red zone seven times last week before garbage time against Houston, which makes you wonder if maybe this is the week Miami wakes up and moves the ball instead. PICK: Dolphins to win by 10-14 points

The Aaron Rodgers COVID news threw this game into a tailspin, with the game hovering around pick ‘em and then re-opening at Chiefs -7.5. Jordan Love will make his first NFL start, and it’ll be on the road, in prime time, against Patrick Mahomes.

Can last week’s “Revenge of the Backup QB” — Cooper Rush, Mike White and Trevor Siemian all won games — narrative continue? Love will have about 72 hours to prepare for a historically bad defense, but he’s likely to get Davante Adams back from the COVID list.

Meanwhile, will the real Chiefs please stand up? 4-4 Kansas City looks nothing like the team that went to two straight Super Bowls and went 38-10 in the regular season over the past three years. The offense has refused to adapt, despite defenses changing and preventing the big play. Patrick Mahomes has refused to take what the defense gives him, and KC leads the NFL in turnovers.

But stop me if you’ve heard this before: Maybe the Chiefs can have success against a bad defense! Green Bay is the third-worst red-zone defense in the league (78 percent TDs allowed), and they’re still missing the Smith brothers and their best defensive player, Jaire Alexander.

The Packers are off extra rest having played Thursday; the Chiefs are on short rest having played Monday. But there’s an odd trend this season: Teams that win on MNF are 7-0 in the following game. PICK: Chiefs to win by 3-4 points

Jason McIntyre is a FOX Sports betting analyst, and he also writes about the NFL and NBA Draft. He joined FS1 in 2016 and has appeared on every show on the network. In 2017, McIntyre began producing gambling content on the NFL, college football and NBA for FOX Sports. He had a gambling podcast for FOX, “Coming Up Winners,” in 2018 and 2019. Before arriving at FOX, he created the website The Big Lead, which he sold in 2010.

Play FOX Super 6 every week for your chance to win thousands of dollars, including a $10,000 prize on the Big Noon Kickoff game of the week, the weekly College Football Saturday contest and, of course, the new “Stack the Cash” Sunday NFL Challenge. Just download the Super 6 app and make your picks today!