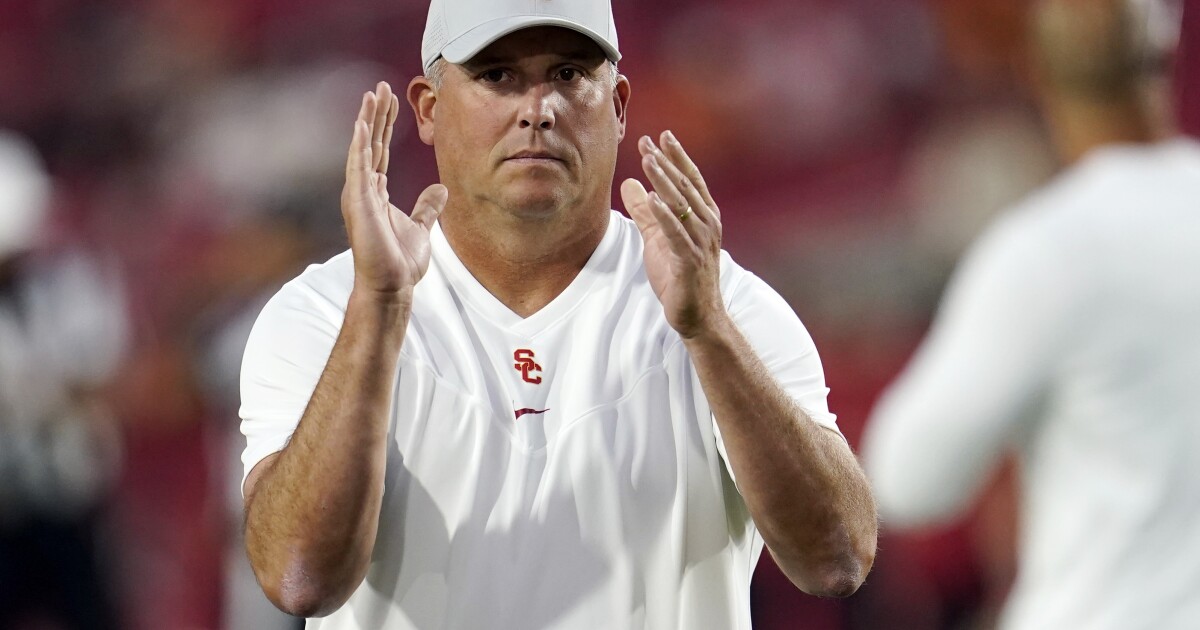 Less than two months after his tumultuous tenure as USC’s head coach came to a close, Clay Helton has already landed his next coaching job.

Helton was announced Tuesday as the coach at Georgia Southern, where he’ll replace a coach who was fired just a couple of weeks after him this season. His expected hire was first reported by Yahoo Sports.

In a video posted on Georgia Southern’s social media, Helton introduced himself to fans and heralded “grit, toughness, and discipline” as tenets of the program he now plans to build in Statesboro, Ga.

“The future is so bright,” Helton said. “We can’t wait to get started. Hail Southern.”

Helton was just two games into his seventh season as USC’s coach when the decision to cut ties with him was made in the wake of a humiliating September loss to Stanford. By that point, athletic director Mike Bohn had already twice committed to keep Helton as coach in spite of fierce ire from USC’s fanbase.

“I just don’t think we had that same sense of belief that with all the resources and the commitment that we put together that we could really aspire to those national championship aspirations that we talk about all the time,” Bohn said after the decision. “It just felt like the right time.”

The decision to fire coach Chad Lunsford at Georgia Southern amid early struggles this season was far less clear, as Lunsford had led the onetime FCS power to bowl games in the three previous years before starting this season 1-3.

Helton, who left USC with a 46-24 record, won a Rose Bowl with USC in 2016 and a Pac-12 title in 2017. But his seven seasons were largely defined by underachieving and undisciplined teams and an unrest among fans who felt Helton was overmatched in his role as coach.

In trading Southern California for the Sun Belt, Helton will have a chance to prove himself on a smaller stage, albeit one with its own set of expectations. Georgia Southern has a passionate fanbase and six FCS national titles to its name. Since making the transition to FBS in 2014, it had just two losing seasons before this one. The Eagles currently sit at 2-6 with four games remaining.

Helton joins a league already loaded with a cadre of respected or up-and-coming coaches, among them Billy Napier at Louisiana, Jamey Chadwell at Coastal Carolina and Butch Jones at Arkansas State. None of those coaches, however, has ever won a New Year’s Six Bowl.

Georgia Southern is betting on the success Helton briefly captured at USC translating in Statesboro.

For Helton, it’s a chance to rehabilitate his image . With two seasons still remaining on his USC contract and a buyout that exceeded $10 million, he would’ve been paid handsomely not to coach at all.

Instead, Helton is jumping right back into the fray, wasting no time in putting USC behind him and starting over again.