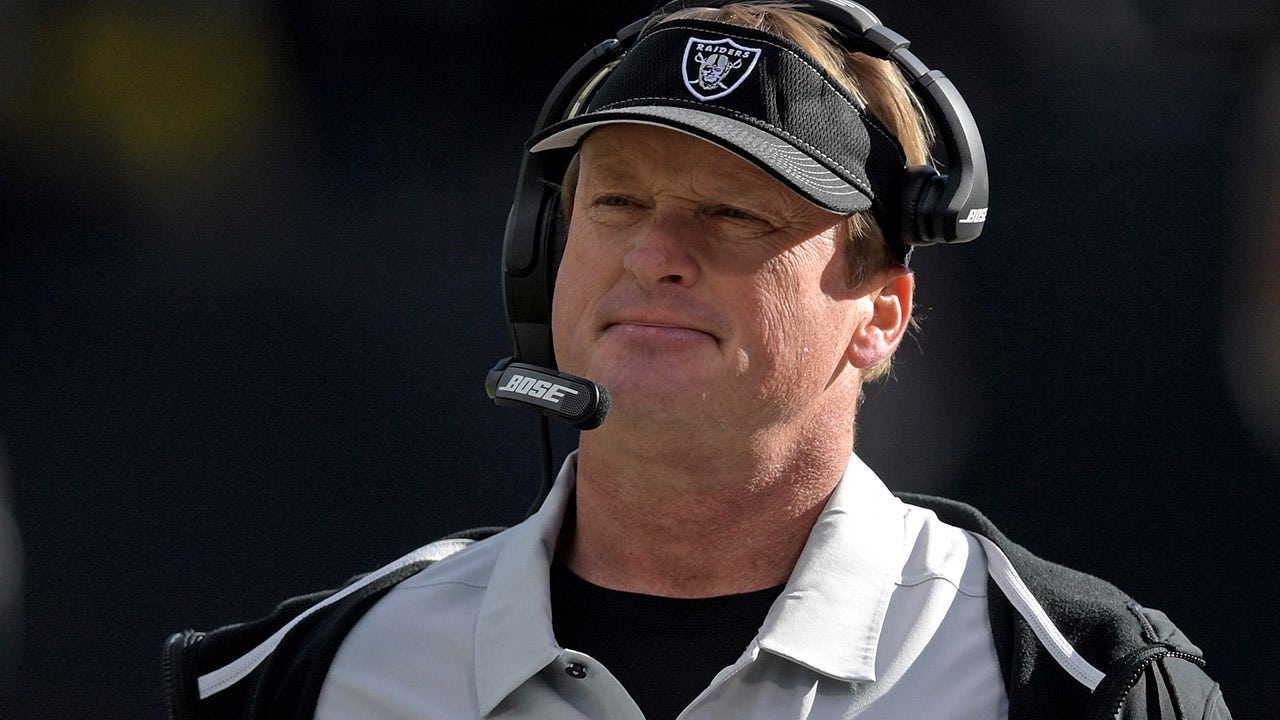 Las Vegas Raiders team chaplain and former NFL quarterback Randall Cunningham said Jon Gruden has continued to attend services at his church since he resigned as the team’s head coach in October.

Yahoo Sports reports that Gruden has reached out to Cunningham since his resignation.

FILE – Las Vegas Raiders head coach Jon Gruden leaves after speaking during a news conference after an NFL football game against the Chicago Bears in Las Vegas, in this Sunday, Oct. 10, 2021, file photo. Jon Gruden is out as coach of the Las Vegas Raiders after emails he sent before being hired in 2018 contained racist, homophobic and misogynistic comments. Gruden released a statement Monday night, Oct. 11, 2021, that he is stepping down after The New York Times reported that Gruden frequently used misogynistic and homophobic language directed at Commissioner Roger Goodell and others in the NFL. (AP Photo/Rick Scuteri, File)
(AP Photo/Rick Scuteri, File)

“I tell him, I said, ‘Hey, I know you as a person. I don’t believe you’re a racist in any faction of the game,'” Cunningham, who is black, said in a phone interview. “If anybody pulled up our records, we would all be guilty. So, I don’t condemn him nor do we as a church condemn him. He’s a faithful person, and I love that about him. And he cares about people, so it’s kind of just what it is.”

Gruden said in a text message he thought highly of Cunningham, the article states.

“I’ve attended his church since I’ve been here,” Gruden said. “He’s the best.”

Gruden’s resignation came after a report in the Wall Street Journal in which Gruden had sent an email containing comments regarding NFLPA head DeMaurice Smith, who is black, as having lips the size of “Michelin tires.”

Gruden also belittled NFL commissioner Roger Goodell with a vulgar description in one of several emails provided by the league to the Las Vegas Raiders. The emails were just some of the 650,000 the NFL looked at during an investigation of the Washington Football Team for workplace misconduct and were written when Gruden was ESPN’s Monday Night Football analyst, not an NFL employee.

Cunningham became an ordained minister in 2003 and opened his church in 2006, Yahoo reports. He said as a pastor he is “always looking for righteousness.”

He made note of a Bible verse, and said regarding Gruden, “We’re all forgiven and we can mature in Christ.”

He added: “I told Jon, I said, ‘If my responsibility is to be here and to be a brother to you, I accept that responsibility.’ … I pray for him and his family and I love him. He’s my brother. And that isn’t going to change,” per Yahoo Sports.

Head coach Jon Gruden of the Las Vegas Raiders talks with quarterback Derek Carr #4 during their game against the Miami Dolphins at Allegiant Stadium on September 26, 2021 in Las Vegas, Nevada. The Raiders defeated the Dolphins 31-28 in overtime.
(Photo by Ethan Miller/Getty Images)

OutKick previously reported Gruden was looking at his legal options against the league following the email controversy that cost him his job.

While the total payout is not known, it seems as if Gruden and team owner Mark Davis reached an agreement after discussing the remaining figures in his deal, which included $40 million guaranteed.