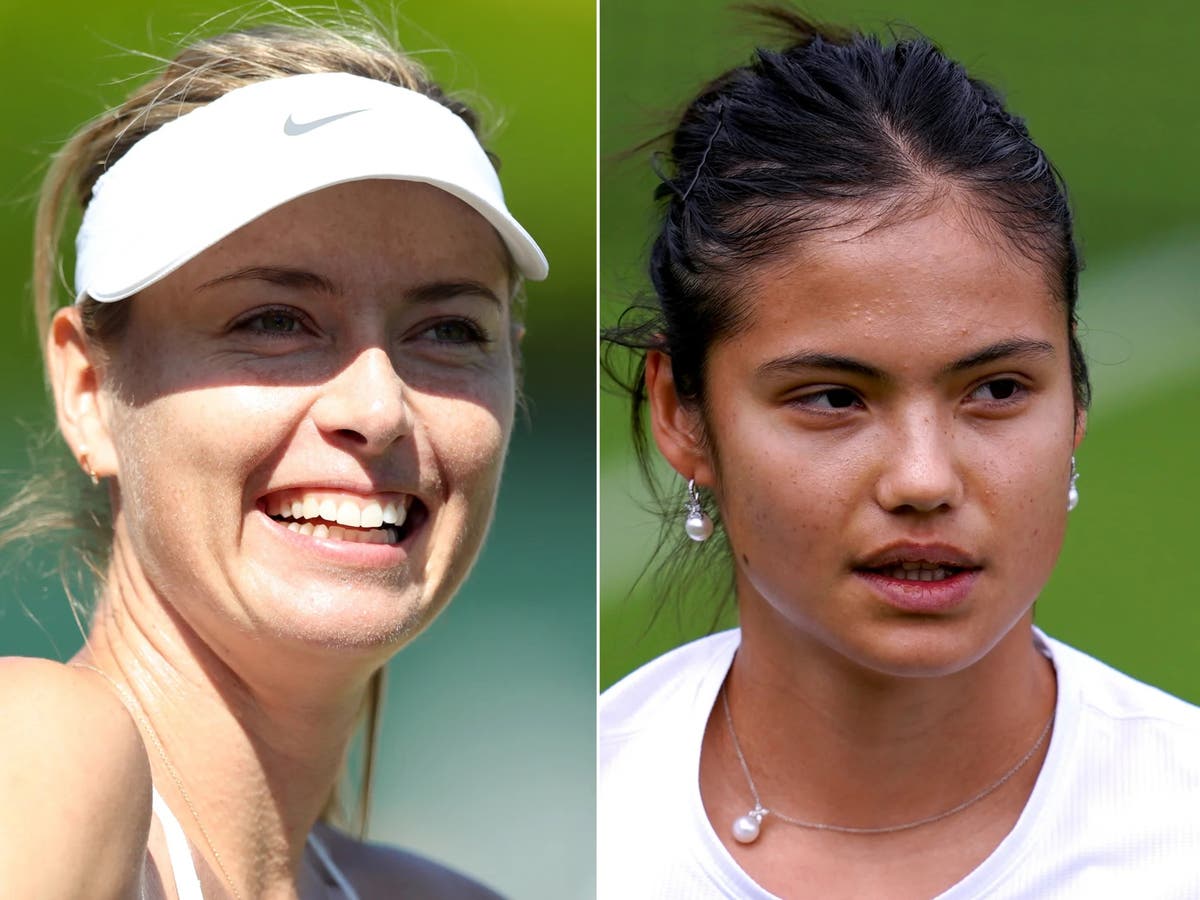 Emma Raducanu should seek advice from Maria Sharapova about how to handle fame and expectations, according to former Wimbledon champion Marion Bartoli.

Having lost in the second round on her second appearance at the All England Club, Raducanu will begin the build-up to her defence of the US Open title that rocketed her to stardom.

Sharapova experienced something similar after winning Wimbledon aged 17 but balanced demands on and off the court very effectively through her career, going on to win four more grand slam titles before retiring two years ago.

Raducanu shrugged off talk of pressure after losing to Caroline Garcia last week but, having gained A-list celebrity status and signed a raft of high-end sponsorship deals, the attention surrounding her is only set to increase.

Bartoli said: “For Emma, because she won so young, obviously with all the contracts and sponsorships she has signed, the pressure she has to face – I mean, I cannot start to imagine it.

“It is so massive. It takes someone so special to handle it. She probably should maybe get some advice from Maria Sharapova, who has been able to do it. It took Maria a little bit of time before she got the second one (grand slam) but then she went on to five in total.

“You have to be kind with yourself. Give yourself a little bit of time. You just need to get those strong results every time, it might not be winning, but quarters, semis, maybe a final. Then you will get your second one.

“If it is too dramatic in terms of change of results – like you win, then you lose in the first or second round – it becomes tricky mentally. You think, ‘OK, I am not even close’.

“Once you get closer and you get strong, solid results every time, then you feel like you are there, ‘OK, I am belonging here, I am in the final four or the final eight, then I can have another major breakthrough’.”

Raducanu has struggled with niggling injuries since triumphing in New York and has not yet achieved any results to suggest a second slam title is on the cards any time soon.

Major question marks also remain over her chopping and changing of coaches as she looks to rediscover the tennis that wowed the sporting world.

Raducanu and Sharapova share an agent in Max Eisenbud, and 2013 Wimbledon champion Bartoli continued: “Maria was on the front covers of all the magazines and she had a lot of major deals.

“I don’t know exactly how many millions of dollars Emma has been able to sign but, looking at the big picture, it looks sort of similar. And Maria was able to handle it perfectly.

“She beat Serena here and then went on to be one of the greatest champions of the game for a lot of years. For me, Maria has been an example of doing that outside of the court but being able to block it so much on the court. It was only about the match, the business and the winning. She was so good at that.

“Obviously Max was Maria’s agent for so long. I think there could be the connection there. Just getting some advice.

“When you look at the top players, they are constantly looking for some advice, tips from people to help them. Even if it is one or two per cent here or there, it makes a massive difference in the end.”

‘Why Do I Have to Work Twice as Hard Just to Get Noticed?’

Yankees Show Flaws and Get a First Look at Frankie Montas