Dodgers Dugout: Should the Dodgers retain Dave Roberts as manager? 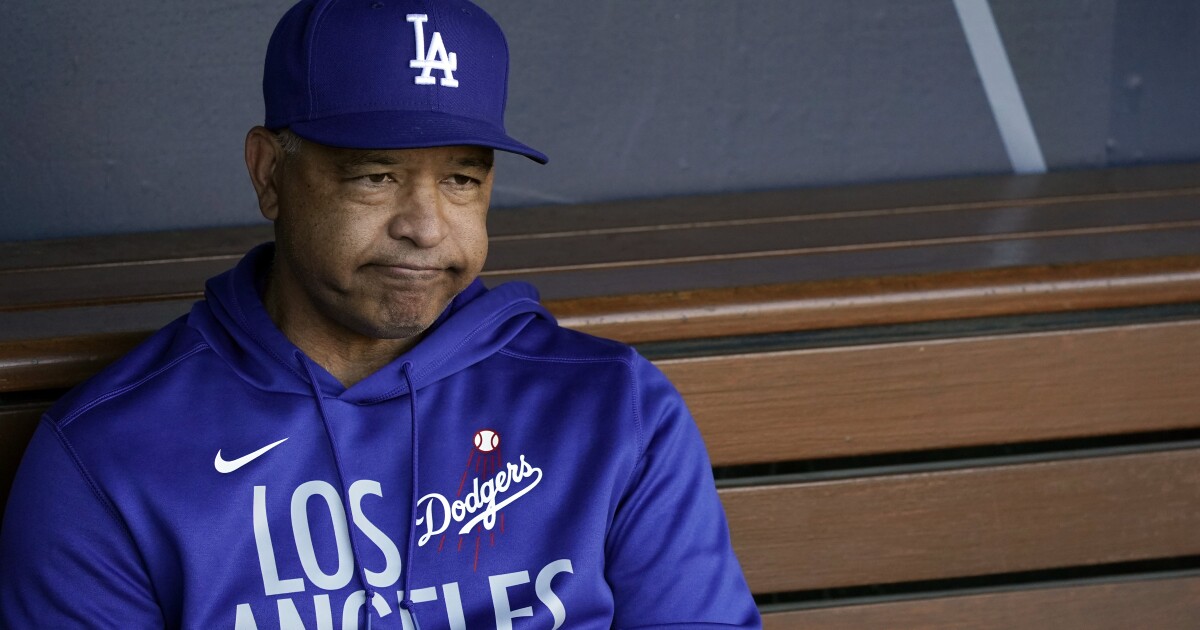 Hi, and welcome to another edition of Dodgers Dugout. My name is Houston Mitchell, and we embark on what should be an exciting offseason.

Should Dave Roberts stay or go?

The emails continue to pour in here and to the general Times letters site demanding that the Dodgers bring in a new manager. It’s easy to think every Dodgers fan feels that way. However, it’s also true that letters mostly come from dissatisfied people. Fans not tired of Dave Roberts, or who 100% believe in him, just don’t bother to write.

So here’s your chance to vote, no matter how you feel.

Click here to vote in our survey and let us know if you think Roberts should stay or go as manager.

Results will be revealed next week, and that is when I will give my thoughts (don’t want to lead the jury now).

An interesting note for those of us who are really old. In 1979, the Times got a lot of letters from readers who thought Tommy Lasorda should be fired. The Dodgers had finished in fourth place with a 79-83 record and some fans were upset with Lasorda, even though he had managed the team to World Series appearances in 1977 and ’78. So the Times asked readers their feelings if Lasorda should be retained. This was before the high-falutin’ internet, when people actually had to write out their thoughts with a pen, put the paper in an envelope, get a stamp, and mail things. Of the more than 1,200 letters received, 72% wanted to retain Lasorda.

Let’s see what happens this time.

Before we begin, go read this story by Jorge Castillo on Dodgers free agents (if you are not a subscriber, it’s only $1 for six months. This newsletter remains, as always, free.).

OK, are you back? Now let’s take a look at the Dodgers’ free agents this offseason. Two things that are still unknown will factor into free-agent decision: What is going to happen with Trevor Bauer, and will there be a universal DH next season and beyond? Also, some free agents may wait to see what the new Collective Bargaining Agreement (provided one is reached this offseason as the old one expires in December) says before signing a contract.

Clayton Kershaw: There are only two teams Kershaw will end up with: The Dodgers or Texas. He may end up with the Rangers so he can finish his career close to home and his family. It would be better for him to come back to the Dodgers, who do need him. Right now, the Dodger rotation is Walker Buehler and Julio Urías. Some fans have given up on Kershaw, which is a mistake, because he is still a very good pitcher. His forearm issue is troubling, but maybe an incentive-laden deal will work. And Andrew Friedman, when asked if he viewed Kershaw differently than other free agents, said: “Yeah, I think that’s fair. Obviously what he’s meant to this organization, to the city — from his standpoint, I think it’s all about what makes sense for him and Ellen and their family. … “I think, taking off my president of baseball operations hat, there’s something nostalgic and great about Kersh playing with one team and being able to win another championship and having a parade.” Really, it’s going to come down to what Kershaw wants to do.

Max Scherzer: Rumor has it he is seeking three years, $100 million. He went 7-0 with a 1.98 ERA in the regular season for the Dodgers, and had a 2.16 ERA in 16.2 postseason innings. Will the Dodgers pony up that much dough for him? If things work out where the Dodgers can get out from under Bauer’s contract, the chances of signing Scherzer go up. It would be fun to see Scherzer get mad every game when the Dodgers try to take him out after five or six innings.

Kenley Jansen: Jansen could command elite closer money on the market, something the Dodgers are unlikely to give him. “It’s not in my hands. I’ve got to thank God for a great opportunity I’ve had here,” Jansen said. “I’m thankful to be here for all these years. It’s the only team I’ve known. They believed in me when I was 17-years-old as a catcher, then they made me a pitcher and here I am now. It happened fast. I enjoyed this journey and I always will be a Dodger.” It seems the Dodgers could fill the closer role next season with Blake Treinen, Brusdar Graterol and Alex Vesia. So the guess here is, that unless he is willing to take a discount to return, Jansen pitches elsewhere next season.

Corey Seager: The shortstop could be seeking a contract valued at $300 million, which seems a lot for an average defensive shortstop who backhands more balls than a tetherball player. The Dodgers had two guys who wanted to play shortstop last season, Seager and Trea Turner. If they sign Seager, they will have to convince one of them to move elsewhere permanently, or, if the DH becomes universal, alternate them between short and DH. Seager says he wants to return, but the price may be too high. The guess here: Some team such as the Yankees offer Seager an outlandish contract and he signs with them.

Chris Taylor: This could be the Dodgers’ most important signing. There aren’t a lot of guys out there who can do what Taylor does, play everywhere and play well. Who replaces him if he goes? Zach McKinstry? Losing Kiké Hernández turned out to be a big blow, losing Taylor would be worse. He wants to remain a Dodger, so unless some other team unexpectedly backs up the Brinks truck for him, he should be back.

Joe Kelly: The Dodgers will decline their option on him, which would have paid him $12 million next season. Instead, he gets a $4 million buyout. The biceps injury that sidelined him in the NLCS will keep him out until at least April, so his future is murky. When he is right, he’s very good, but he gets hurt a lot.

Danny Duffy and Cole Hamels: The Dodgers acquired both these injured pitchers with the hope they could pitch in September. Neither one did and were paid by the Dodgers for that privilege. Don’t see either one of them coming back.

Corey Knebel: When healthy he pitched well. It could go either way as far as his return. There are a lot of relievers on the market, and the Dodgers have never been hesitant to say farewell to a bullpen arm if a cheaper option is available.

Albert Pujols: He has said he wants to play next season. If there is a DH in the NL, and he is comfortable only being a DH against left-handers, he could very well return, as he killed lefties last season (.294/.336/.603 with 13 homers in 136 at-bats). Dodgers players loved him, it all depends on what management, and Pujols, want. If he doesn’t sign with St. Louis for a farewell tour, then the Dodgers are as good a bet as any.

Then there are (with all due respect), the minor free agents: Neftali Feliz, Mike Kickham, Kevin Quackenbush, Ryan Meisinger, Brandon Morrow and Nick Tropeano. The Dodgers hoped Morrow would return from injury last season, but it didn’t happen and his career appears over. The rest might be back, they might not be back, they are just roster fillers.

The following players are under contract for next season:

The following players are eligible for arbitration, the dollar figures are a prediction from MLB Trade Rumors about how much money the player will receive.

The following players are under full team control and will be back next season unless the Dodgers let them go:

to the Atlanta Braves on winning the World Series. Nice to see Freddie Freeman get a title, and Joc Pederson get a second one. The only person on the Astros I feel for is Dusty Baker.

This means that for six straight seasons, the road to the World Series goes through L.A.

I’m usually harsh on Joe Buck, since he always comes across as against the Dodgers. However, one thing he consistently does: Whenever he mentions the Astros won the World Series in 2017, he also points out that they cheated. Kudos to him.

In case you missed it

Q&A: MLB season is almost over. What comes next for Trevor Bauer and the Dodgers?

Could the Dodgers turn to these free agents to fill out their 2022 roster?

For Dodgers this coming offseason, team icons are among those in free-agent flux