Djokovic deported by Australia for being unvaccinated 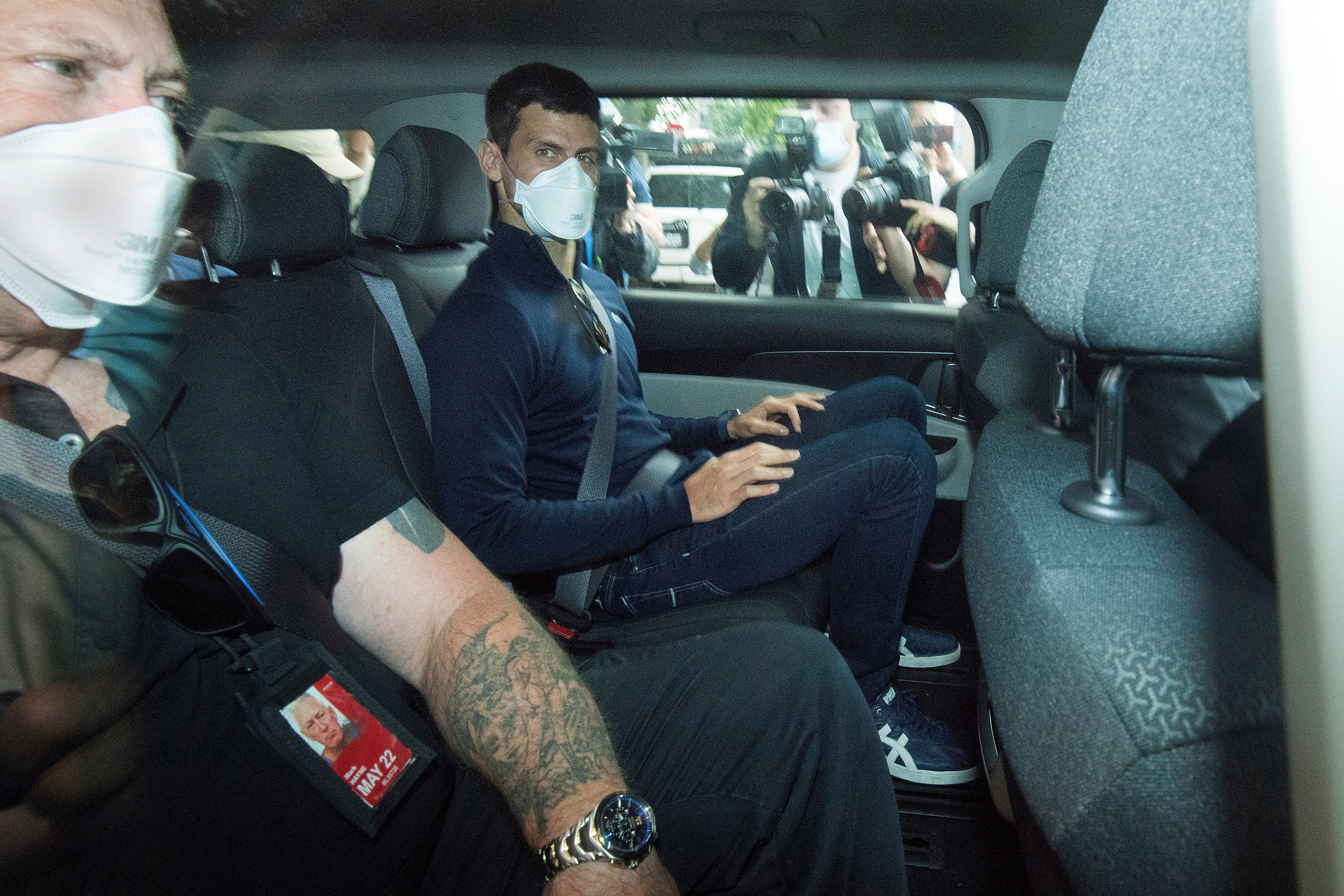 Novak Djokovic was deported from Australia on Sunday after losing a bid to stay in the country to defend his Australian Open title despite not being vaccinated against COVID-19.

A masked Djokovic was photographed in a Melbourne airport lounge with two government officials in black uniforms before he left for Dubai. It’s not clear where he will go from there. Among the possibilities are Spain, Monaco or his native Serbia, where he has an almost iconic status and would likely be greeted with a hero’s welcome.

The No. 1-ranked tennis star has spent the past 10 days at the center of a dizzying drama over his vaccination status that has polarized opinion worldwide and struck a chord in Australia, where coronavirus cases are surging.

AUSTRALIAN OPEN FAVORITES SOUND OFF ON NOVAK DJOKOVIC SAGA: ‘ALL THIS COULD HAVE BEEN AVOIDED’

The 34-year-old said he was “extremely disappointed” by a court’s decision Sunday that led to his deportation. But he added that he respected the ruling and would cooperate with authorities.

The saga began when Djokovic was granted an exemption to strict vaccination rules by two medical panels and Tennis Australia in order to play in the Australian Open. That exemption, based on evidence that he recently recovered from COVID-19, apparently allowed him to receive a visa to enter Australia. But upon arrival, border officials said the exemption was not valid and moved to deport him.

The ensuing back-and-forth raised questions of whether Djokovic was unfairly given special treatment or unfairly singled out because of his celebrity status and saw many complain that the drawn-out battle at the very least made Australia look bad.

A court initially ruled on procedural grounds that Djokovic could stay, but Australian Immigration Minister Alex Hawke, who has wide powers, later decided to deport him. In addition to not being inoculated against the coronavirus, Djokovic is a vocal vaccine skeptic, and the government said his presence could stir up anti-vaccine sentiments.

Djokovic said he was “uncomfortable” that the focus had been on him since his visa was first canceled on Jan. 6.

“I hope that we can all now focus on the game and tournament I love,” he said. “I will now be taking some time to rest and to recuperate, before making any further comments beyond this.”

The decision dashes Djokovic’s hopes of winning a record 21st Grand Slam title. He is currently tied with rivals Roger Federer and Rafael Nadal for the most Grand Slam singles trophies in men’s tennis.

NOVAK DJOKOVIC BACK IN DETENTION, CONTINUES TO FIGHT DEPORTATION

A deportation order could also ban him from Australia for three years — keeping the player from the tournament he has won a record nine times in the coming years.

Just as the case has all along, the decision to deport Djokovic split opinion.

In Serbia, where Djokovic has received overwhelming support, President Aleksandar Vucic said the hearing was “a farce with a lot of lies.”

Serbian tennis player Novak Djokovic rides in car as he leaves a government detention facility before attending a court hearing at his lawyers office in Melbourne, Australia, Sunday, Jan. 16, 2022.
(James Ross/AAP via AP)

“They think that they humiliated Djokovic with this 10-day harassment, and they actually humiliated themselves. If you said that the one who was not vaccinated has no right to enter, Novak would not come or would be vaccinated,” Vucic told reporters.

Back in Australia, Prime Minister Scott Morrison hailed the decision as one “to keep our borders strong and keep Australians safe.”

Hawke, the immigration minister, said those strong border policies “are also fundamental to safe-guarding Australia’s social cohesion which continues to strengthen despite the pandemic.”

But opposition spokesperson on the home affairs portfolio, Kristina Keneally, said Djokovic was being deported for what he said and did publicly overseas before the government gave him a visa in November.

“This mess isn’t a failure of our laws. It’s a failure of Morrison’s competence & leadership,” Keneally tweeted.

The pandemic response has become politically charged ahead of elections, due by May, when Morrison’s conservative coalition will seek another term.

Infection rates have soared across much of Australian since December when Morrison’s government relaxed what had been some of the democratic world’s toughest restrictions on international travel.

Concern over surging infections hung over Djokovic’s case. Hawke called the top-ranked player a “talisman of a community of anti-vaccination sentiment.”

The player has in fact become an unwitting hero to the anti-vax movement. On Sunday, a protester at a rally in Amsterdam against the Dutch government’s virus lockdown brandished a sign supporting Djokovic.

Lloyd raised the example of Djokovic giving a French newspaper journalist an interview last month while he was infected with COVID-19 and taking off his mask during a photo shoot. Djokovic has acknowledged the interview was an error of judgment.

The minister canceled the visa on the grounds that Djokovic’s presence in Australia may be a risk to the health and “good order” of the Australian public and “may be counterproductive to efforts at vaccination by others in Australia.”

But the decision did not sit well with some.

Vasek Pospisil, a Canadian who won the 2014 Wimbledon men’s doubles title and has worked with Djokovic to form an association to represent players, tweeted: “There was a political agenda at play here with the (Australian) elections coming up which couldn’t be more obvious. This is not his fault. He did not force his way into the country and did not ‘make his own rules’; he was ready to stay home.”

Pospisil wrote that Djokovic wouldn’t have tried to go to Australia at all and would have “been home with his family” had he not received the medical exemption.

Because Djokovic has withdrawn from the tournament after Monday’s schedule was released, he has been replaced in the field by what’s known as a “lucky loser” — a player who loses in the qualifying tournament but gets into the main draw because of another player’s exit before competition has started.

That player is Italian Salvatore Caruso, who is ranked 150th in the world.