Column: Vin Scully makes the most of each day while mourning the loss of his beloved wife 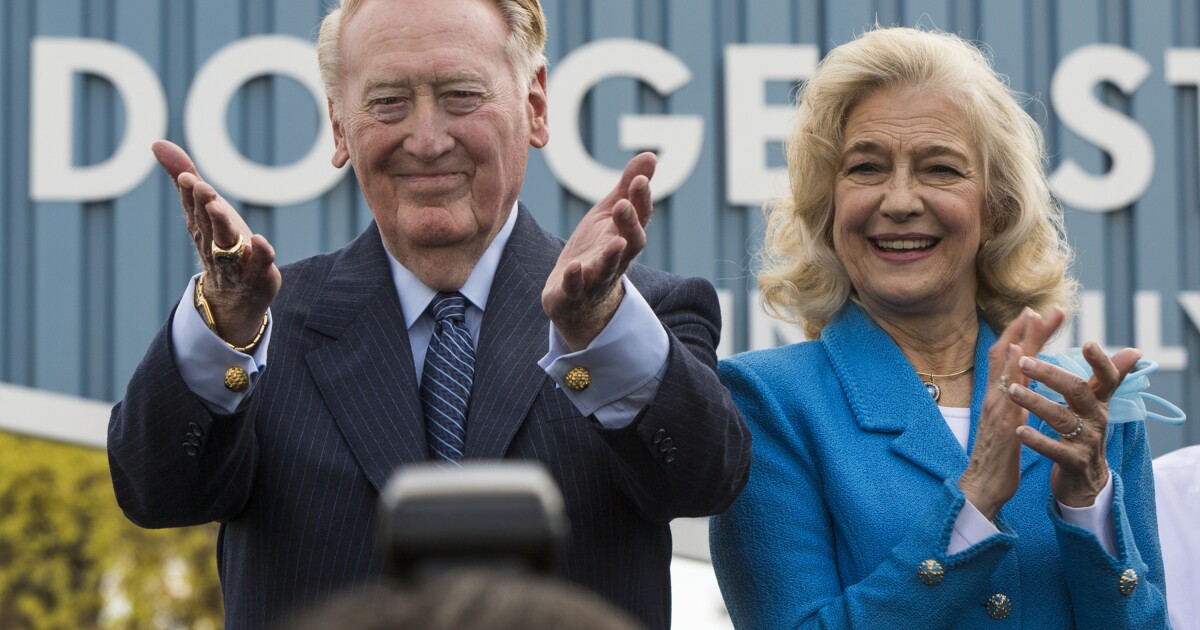 Vin Scully was so sharp, one could easily envision him stepping right back into the broadcast booth.

He was also so muted, one could feel his pain.

In some of his first public comments since the Jan. 3 death of his beloved wife, Sandi, Scully answered my recent phone call with both resignation and hope.

“I’m OK, I really am,” he said. “I’ve been severely wounded, but I’ve also come to grips with it. I believe it’s all God’s plans. I’m just trying to do the best that I can for as long as I have.”

What ensued was a 30-minute conversation that revealed the human side of a Los Angeles sports deity, the city’s most trusted voice lowering his tone to share the anguish of his loss, the path toward his recovery, and the wisdom gained on the journey.

He was speaking from his home, where the 93-year-old icon spends virtually all his time these days with constant visits from his three daughters and the 24-hour presence of a nurse.

“I’m able to get out, but in all honesty, for whatever, 100 different reasons, I guess, I’m just more content being in the house, far from the maddening crowd, I guess you could say,” he said. “I find a great deal of peace just being at home.”

He was also speaking from his heart, which was indelibly broken when his wife of 47 years died of complications from ALS.

“I’m all right. I believe it’s God’s plan. We had wonderful times together,” he said. “He’s called Sandi home, and I’m just waiting for the call.”

When that call comes, he said, he is looking forward to a reunion with his bride.

“Oh, absolutely, without a doubt, I’d leave yesterday,” he said.

Sandi was the one to whom he sang “The Wind Beneath My Wings” on his final day at Dodger Stadium in 2016. Sandi was his constant companion, even sitting behind him in the broadcast booth throughout his final season. Sandi was his best friend, and he still struggles to endure her absence.

“I wouldn’t want to dwell on how I feel much more than, you can imagine, anybody can imagine, when you lose your partner, the loss is overwhelming, and then eventually you come to grips with it,” he said. “As of right now, I would say that I’m healing to reality, and I will try to do the best that I can for as long as I have.”

Scully is hanging in there. That is about the only way to describe it. The man so renowned for his wonderful musings on baseball now honestly speaks about Sandi’s death with the same elegant, yet pained, grace.

“It was all part of life. It’s all part of the plan. We all get born, we live, and eventually we pass on,” he said. “I’m just hoping that it won’t be too long before I join her, but otherwise I’ll just wait my turn.”

He was asked to sum up Sandi’s impact on him. He referred to that memorable Sunday afternoon song.

“It took a lot of courage to stand up in Dodger Stadium and listen to myself singing ‘The Wind Beneath My Wings,’ ” he said. “That would sum her up perfectly, exactly. … She was the wind beneath my wings. … That was exactly how I felt and exactly how I lived.”

Four days after Sandi’s death, Scully suffered another loss with the Jan. 7 passing of longtime Dodgers manager Tommy Lasorda. That is a lot for one man to handle. Scully said he soothes himself by planning on another reunion.

“I knew Tommy over 60 years. That’s a long time in anyone’s life,” Scully said. “We had so much fun together. I always had a feeling that Tommy might need somebody to chew the fat with. I would do that with him. We were as close as we could be. … We had a wonderful relationship right down to the end. … I’ll see him again one of these days.”

Scully is told that the strength he has shown in the last six months is inspiring. Of course, he disagreed.

“I don’t think I’m strong at all,” he protested. “When you are alive, you endure the pain, the joy, the laughter. … I have been so grateful for the life that I’ve had. My relationship was as good as it could possibly be. The pain is part of the price.”

How has he emotionally survived?

“I don’t think I’d be able to do much of a job if I didn’t pray a little bit,” he said. “Prayer has really helped me.”

He has also relied on those closest to him, the ultimate family man once again being carried by family.

“Naturally, I’m very much involved in my family. I need them, and they need me. That’s a current love affair, especially with my three daughters,” he said. “We take turns with me hosting them for dinner. I see one of them usually in the course of the day at lunchtime. It’s great.”

Also visiting him one afternoon were Dodgers officials Stan Kasten and Lon Rosen, who presented him with his 2020 World Series ring, for which he was eternally grateful, not that he would ever actually wear the thing.

“They brought this beautiful blue box … and there was the ring, which I admired and have since put it away,” he said. “I don’t know if I’ll ever see it again. I have a habit of doing that.”

Scully truly doesn’t understand all the accolades. He never has. Now, perhaps more than ever, he feels the greatest award can be found in life itself.

“With everything else that’s happened, I still feel that I have been tremendously honored,” he said. “I don’t know why, but the more I think of what I’ve done, actually, the more humble I feel. I don’t feel like I really have done anything except I’ve lived a long time.”

When told he nonetheless sounded amazingly sharp, he laughed.

“There is no way I can think of myself of being sharp. I don’t think I’ve ever felt that way when I was working, hoping I wouldn’t make too many mistakes,” he said. “I’m just enjoying every day as best I can.”

He is clearly still eloquent enough to serve as a guest commentator for a nationally televised inning or two in the postseason. Remember last October when the baseball world called for his invitation? It turns out he wasn’t invited because he has always declined, and he would do so again.

”They asked me so many times, Joe [Buck] would always be saying, ‘Aw, c’mon Vin, we’d love to have you on, just for an inning,’” he recounted. “I said, ‘I don’t belong there. I don’t deserve to be there. I’ve been there, I’ve done it, I’ve been grateful, and that’s good enough. And after a while, you make a mistake, people are like, he’s on the air again?”

So, for the record, he wouldn’t come out of retirement even for an inning on a Dodgers broadcast?

But he did leave the door open for more of his memorable taped in-game bits.

“If the Dodgers ask me to do a promo over the radio, I’m more than happy to do that,” he said. “I like the feel that, even as far as I am from the team … maybe I have that tryout locker in the clubhouse, that somewhere I’m associated with the team.’’

Scully, keep talking, forever and ever.