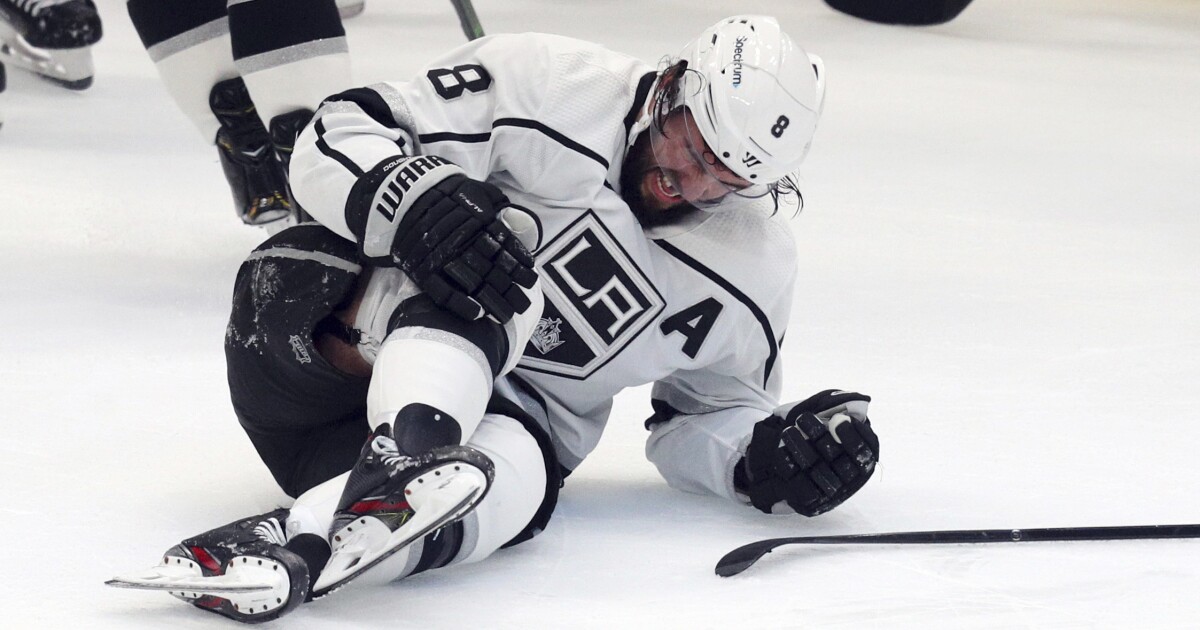 The Kings’ goal of returning to the playoffs, which has been undermined by their shaky 1-4-1 start, took a significant hit on defense with the announcement that Drew Doughty will be out of the lineup about two months because of a bruised right knee and that Sean Walker suffered season-ending tears of the anterior cruciate and medial collateral ligaments in his right knee. Walker will undergo surgery after the swelling in his knee subsides.

Doughty, a key member of the Kings’ 2012 and 2014 Stanley Cup championship teams, was diagnosed with a tibial plateau contusion — or bruise — and hyperextension as the result of a knee-on-knee hit he absorbed Friday at Dallas, general manager Rob Blake said Wednesday. Doughty, who ranks second in team scoring with a goal and seven points in four games, and was leading the Kings with an average of 22 minutes and 37 seconds of ice time per game, will be off the ice for roughly six weeks.

“Obviously there’s going to be a conditioning factor and a game to play. And hopefully [Doughty will] resume play around eight weeks, so that’s what we’re looking at time-wise,” Blake said during a webinar. “This will be adjusted as we go and the further along as we see the healing process.”

Blake said he had experienced the same type of knee injury that Walker has, and that he didn’t have trouble with his knee again after he underwent surgery. “We see this injury quite often in sports,” Blake said. Walker was injured in a game at St. Louis on Monday.

Both defensemen were put on injured reserve but not on long-term injured reserve, which provides teams extra salary cap room. Blake said his plan was to replace the two right-handed-shooting defensemen from within the organization rather than seeking reinforcements through a trade.

“We’ll look at all different opportunities but for now we’ll fill that internally,” he said, adding that Kyle Clague and Austin Strand will pick up more minutes. Clague, who was put on waivers earlier this season but wasn’t claimed, shoots left-handed, so the Kings won’t have a left-right balance among their defense pairs.

The Kings, who will open a five-game homestand Thursday, have lost five straight games since they won their season opener against Las Vegas. They’ve been outscored 18-8 during their winless streak, including a shutout loss to the Blues on Monday. Blake said he was hopeful forwards Lias Andersson and Andreas Athanasiou, who have been out because of undisclosed injuries, would soon return to the lineup and will fortify the offense.

“I don’t think anyone’s happy with our position and our start,” Blake said. “There’s been some good things during stretches, during games. Our special teams need to be better and at a much higher level. But again, we’re going to welcome back a few of these forwards coming back in to kind of surround that depth up front.”

He also said the team’s playoff aspirations haven’t changed. “No. That’s where we wanted to be,” he said. “We’re five games, six games in and we need to pick up our pace of play and be better in a lot of aspects of our game.”