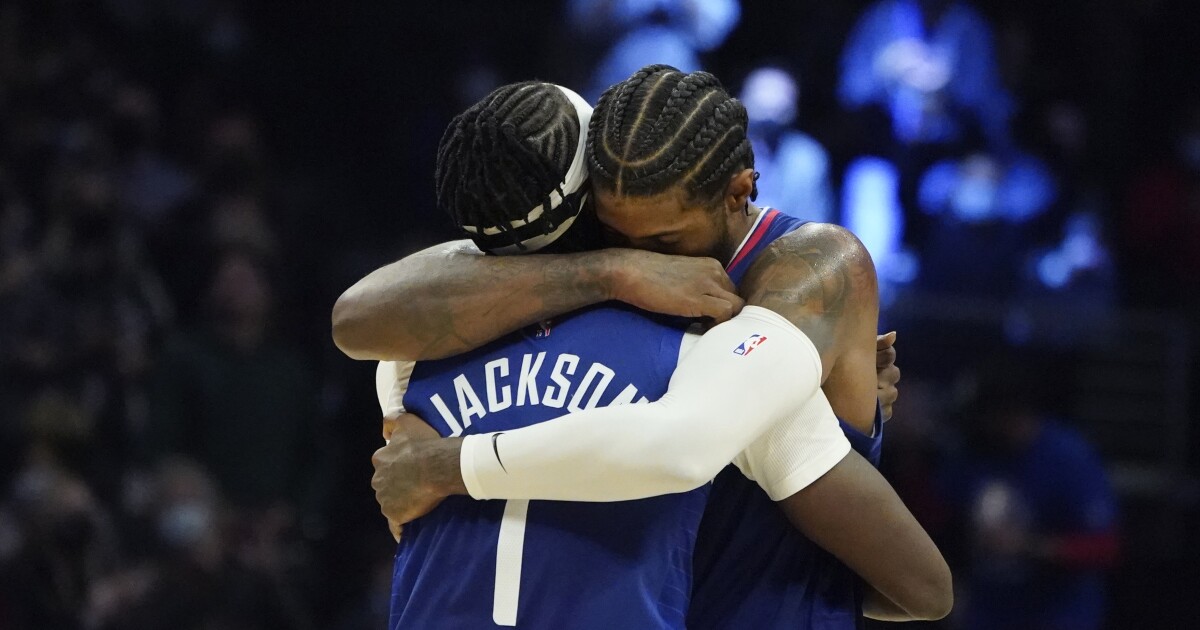 On yet another night when offense was scarce for the Clippers, their most important basket came with 36 seconds to play.

Paul George had scored 27 of his 32 points after halftime, but in Monday’s final seconds, couldn’t find a crease in Oklahoma City’s defense. A pass to his left found guard Reggie Jackson well beyond the three-point arc. He lofted a running, one-handed floater that touched the rim’s front, then its back, then fell through for a three-point lead the Clippers would not relinquish in a badly needed 99-94 win.

But it was what happened next that became one of the most important moments of the Clippers’ season so far.

Standing at midcourt, George held his arms open and embraced his closest friend.

“I needed that hug,” Jackson told The Times. “Once he gave me a hug, he’s like, ‘Appreciate it.’ He’s like, ‘You gonna be good. You’re good. You made one.’ He was just so happy for me and man, I literally told him like, ‘I’m just happy I didn’t let you down. I was happy to get one for you.’”

The moment had been building not for 48 minutes but for four months, since Jackson’s transformation into a reliable, second-best offensive option following Kawhi Leonard’s season-ending knee injury fueled the deepest playoff run in team history. Jackson scored in double figures in 16 of 19 games. He wore goggles during games, talked about keeping things in perspective and became the avatar for the roster’s joyful rebound following 2020’s bitter disappointment.

When Jackson re-signed on a two-year, $22-million deal in August, he knew Leonard would be sidelined for months and believed his playoff production would continue to roll.

Instead, he made just 31% of his shots and only 29% of his three-pointers during a 1-4 start. George, whose friendship with Jackson dates back a decade, could sense the weight.

“He put a lot of pressure on himself,” George said. “And when you’re not making shots and the game’s not going how you want it to, it just makes it that much tougher.”

“I needed that hug.”

Jackson’s best NBA attribute might be his Teflon nature, his ability to allow neither the good wins nor poor shooting nights to stick to him long. The attitude comes from a self-awareness that he is “blessed to do what I love to do,” and that he is still doing it, at all, after contemplating retirement in 2020.

“I like to think I stay confident, I stay very optimistic, I try not to hit dark days and all that and try to exude that I’m OK,” Jackson said. “But at times, shoot, we all kind of go through it.”

It was compounded by George’s red-hot start, and Jackson’s frustration that he wasn’t complementing his friend the way he’d proven he could last summer.

“I like to feel like I’m capable to take some added pressure on, to feel like I can play well for my teammates. To not necessarily do so and shoot the ball right now, not to really be helping in that way, playing well right now, yeah it sucks. It’s tough,” he said. “I try not to let it show. I try not to exude it. I try to stay positive and upbeat.

“I’d like to be optimistic and fun, see the silver lining in everything, but yeah, I still have emotions at times. I still feel it. When I’m not being successful, I still go home and it weighs on me a little bit.”

The Clippers entered Monday shooting 31% from deep, nine percentage points lower than last season’s league-leading mark, despite returning many of the same shooters and generating what coach Tyronn Lue’s analytics suggested were more open looks than ever. Making it all the stranger was that the Clippers often could not miss during practice, Jackson said.

They tried cutting the tension head-on, to the point some laughed in bewilderment at halftime Monday after missing 14 consecutive three-pointers. Rookie teammate Brandon Boston Jr. joked with Jackson that whatever he was saying to the rims, he needed to speak more politely. Jackson told Lue to loosen the rims. Lue, a former point guard, has told Jackson and Terance Mann that he may be “kind of fat, but you can borrow my wrists; I can still shoot it.”

More seriously, Lue told everyone to continue to trust their training and keep firing.

“He put a lot of pressure on himself. And when you’re not making shots and the game’s not going how you want it to, it just makes it that much tougher.”

Yet, as the rest of the Clippers recovered from one of their worst offensive first halves by making 12 of their 21 three-pointers after halftime against the Thunder, Jackson had made just two of his seven shots in the second half before he took the pass from George. On his 16th shot of the night, he made his fifth and most important basket.

Oklahoma City called timeout, but instead of immediately returning to the Clippers’ bench, George paused at midcourt logo for Jackson.

“At a time like this you want your boys to rally behind you,” George said.

It recalled a scene nine months earlier, when a last-minute mistake by Jackson nearly cost an improbable win in Miami. Jackson was still berating himself when teammates physically stepped in his path and held him until his emotions passed.

“It was just poetic to have [George] at half-court,” Jackson said. “He’s played so well for us, for him to get trapped and for me to be able to come up big and make a shot was good.

“I told him like, I’m going to stay confident in myself, too, but I literally said I’m just happy to get one for you. And, just kind of joked like, ‘I’ll always make one shot for you.’ I needed that, honestly.”

Update: The first of two games between these teams in Minneapolis could be played without guard Patrick Beverley, the former Clipper who missed Monday’s Timberwolves (3-3) loss to Orlando because of soreness in his left calf. Wolves center Karl-Anthony Towns is averaging 24.8 points, including 50% three-point shooting on six attempts per game, but his 4.2 assists have been offset by his 4.2 turnovers.