Clippers find their hot hands in shootout win over Timberwolves 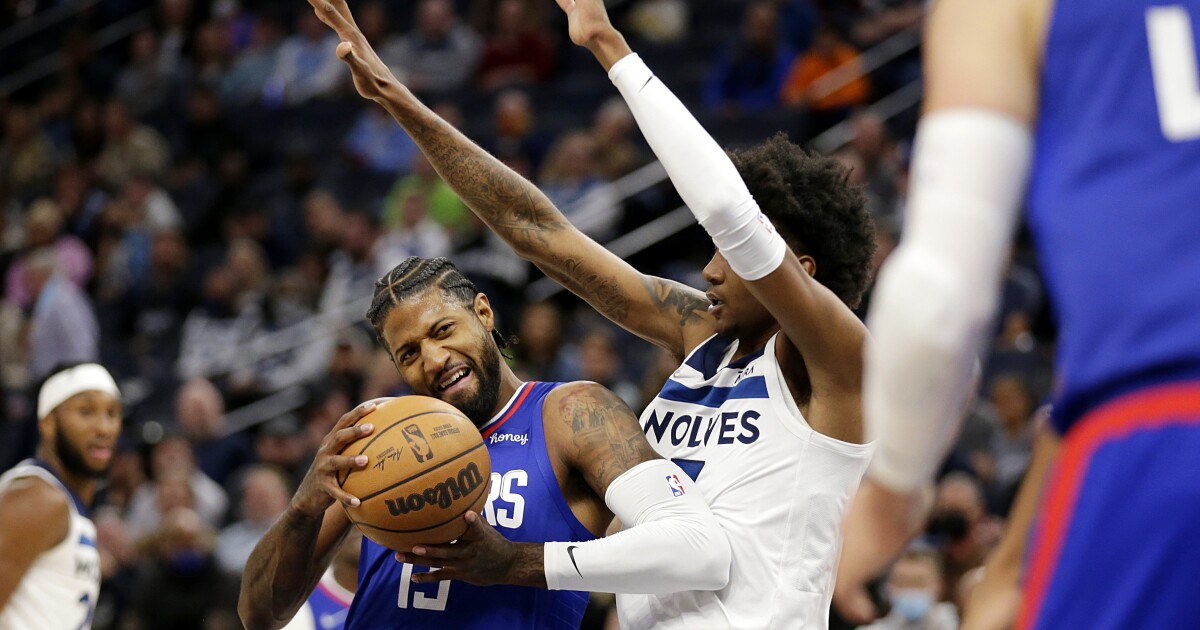 When the Clippers arrived here Tuesday afternoon, they were not thinking only about the open shots they had missed or the defensive pressure that Minnesota posed.

There was a real sense that although only six games out of 82 had been played, time was ticking to make fixes before their record grew too dire, and the gap between them and the playoff contenders grew.

“We never wanted to be 1-4,” guard Reggie Jackson said. “We knew it wasn’t time to panic. But yeah, it was definitely time to fix things quickly and get your foot on the gas.”

Circumstances had contributed to the start. No Marcus Morris. No Kawhi Leonard. No Serge Ibaka. Yet on a roster with so many returners, there were no excuses for the games where the Clippers’ offense had stagnated or their rebounding had been nonexistent. Less than two weeks into a seven-month regular season, and despite their talk about keeping a long-term perspective, an urgency had begun to set in.

“At some point things have to change for us. We’re not a young team, we’re not a team that’s, you know, ‘Let’s just wait for guys to come back.’ The time is now for us.”

If they play as they did in stretches during Wednesday’s 126-115 win against the Timberwolves, their turnaround could be quick.

With 32 points on 18 shots, George continued his torrid start that has seen him average 28.9 points through seven games. On a night that reached 39 degrees in the third quarter, George fanned himself after backing down Jaden McDaniels in the post, then taking a long step backward behind the three-point arc and drilling the shot.

In one second-half stretch, George hit the back of his head on the court falling after a rebound, then got up in time to set his feet and absorb a charge from a barreling, 6-foot-11, 250-pound Karl-Anthony Towns.

“As far as his play, it’s been off the charts,” coach Tyronn Lue said.

But the news was not that George had remained the Clippers’ do-everything engine. It was that after three games where they mustered just 79, 92 and 99 points, the Clippers (3-4) awoke because of more than just their All-Star. With 21 three-pointers on 36 attempts, it marked only the 13th time in NBA history that a team had taken at least 35 three-pointers and shot better than 58%.

Jackson made the first three-pointer. And the second. He made seven of his nine, for 29 points, after entering just 16 of 55 from deep on the season, to continue a turnaround that began with Monday’s game-sealing shot to beat Oklahoma City, and Lue’s nearly week-old strategic switch to move him into a lead ballhandler role to get him more involved within the offense.

He had made shots early in games this season only to cool off. It was after his fourth basket fell that he realized the “timid” way he and others had been playing would be different.

“Feels like we’ve been in quicksand a little bit this season, but tonight, hopefully we get some
carryover till Friday,” Jackson said. “Hopefully tonight’s game gives a lot of us who have been struggling — I know for myself, it definitely does — give me more confidence.”

Nicolas Batum made six of his eight three-pointers to finish with 20 points and Luke Kennard made two significant defensive plays to blunt Minnesota’s fourth-quarter comeback. Former Clippers teammate Patrick Beverley slapped Kennard’s hand before throwing an inbound pass, drawing a technical foul. When Beverley lined up a second time to throw an inbound pass, Kennard tipped it away, leading to a dunk by Batum and a 10-point lead with four minutes to play.

The Clippers’ improvements in one area masked the areas that serve as reminders that this two-game winning streak could be fragile.

They committed 21 turnovers that Minnesota (3-4) turned into 30 points.

Their bench unit has yet to find its ideal calibration. Their depth isn’t bottomless. Mann fell hard on his tailbone and was still hurting after the game. And L.A.’s play late in the second and fourth quarters, leading by 12 and 14 points, failed to decisively put away Minnesota with one starter missing (D’Angelo Russell) and another (Anthony Edwards) whose explosive athleticism wasn’t the same after returning to the game in the third quarter after briefly limping.

Only two teams forced a higher percentage of turnovers than the Timberwolves, and their pressure was a factor, but many of the Clippers’ mistakes were their own doing, including some of the decisions made by George that led to a season-high eight turnovers.

“We got to clean up some stuff and we just got to be ready for their pressure,” George said.