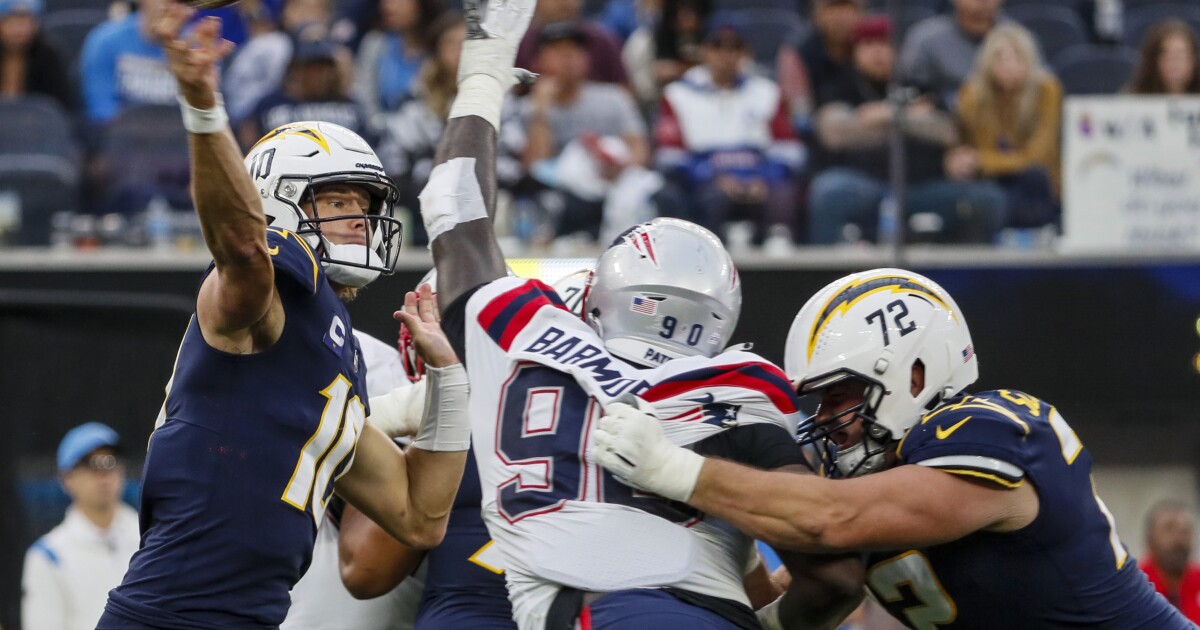 Following two of the least productive games of his NFL career, Justin Herbert is now also dealing with a hand injury.

The Chargers’ quarterback hit his hand on a New England defender on his follow through late in the game Sunday. Herbert was limited in practice Wednesday.

The situation wasn’t known publicly until the team released its official injury report.

Herbert hit his hand in a similar manner against Kansas City on Sept. 26 but missed no snaps and eventually threw a winning touchdown to Mike Williams in the final minute.

After the victory over the Chiefs, Herbert produced 620 yards and seven touchdowns (with no interceptions) through the air in wins against Las Vegas and Cleveland as the Chargers opened the season 4-1.

But he and the offense have appeared out of sync over the last two games, losses to Baltimore and New England. Herbert completed 54% of his attempts with three touchdowns and three interceptions in the defeats.

After both games, Herbert admitted he saw things from each defense that he hadn’t anticipated. Against New England, he also was under steady pressure as the right side of his offensive line struggled.

Now, in preparing to play Philadelphia, Herbert is faced with more than just trying to solve the Eagles’ defense. It remains unclear how much his hurting hand will impact his attempt to bounce back this weekend.

Herbert and coach Brandon Staley are not scheduled to meet with the media again until Friday, meaning the uncertainty probably will linger.

Staley, who is in his first season as a head coach, talked Monday about the importance of Herbert continuing to learn and grow during his second year in the NFL.

Against New England, Herbert began and ended the game with touchdown drives, during which he was a combined nine of 13 for 139 yards. On the Chargers’ other nine full series, he was nine for 22 for 84 yards.

After taking an early 14-7 lead, the Chargers managed to keep the score close — thanks to their defense — until the Patriots made it a two-possession game in the final three minutes.

Herbert was sacked three times and pressured 17 times, leading to several hurried moments. Two of the Chargers’ three longest plays Sunday came on the ground, a marked departure for this offense since Herbert became the starter last season in Week 2 of his rookie year.

Herbert was the NFL’s Offensive Rookie of the Year in 2020. He set or matched several league records while throwing for 4,336 yards and 31 touchdowns, and completing 66% of his attempts.

These last two games represent the first genuinely rough patch of his young career, Herbert leading the offense to only four touchdowns in 21 possessions.

“The thing about Justin is he is at the beginning,” Staley said. “What he’s done is set this incredible precedent where people expect him to throw for 300, 400 yards, 70% completions, four touchdowns, zero interceptions. That’s a good thing that he’s set that standard for himself.

“There’s going to be some setback, some disappointment. That’s what I told him [Sunday]. … There are a lot of things in that game that he’s going to learn from. That’s why they say experience is a great teacher because the only way you learn from it is by doing it.”