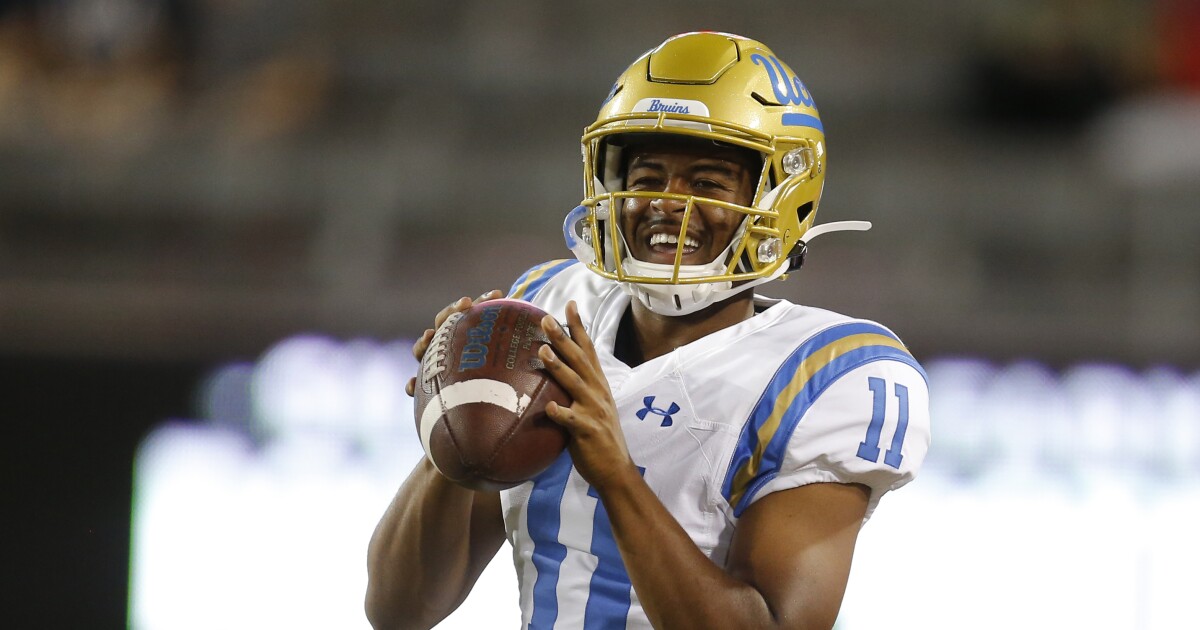 He was a backup quarterback at UCLA, the agent reminded Griffin and his father. Most of the name, image and likeness deals were expected to flow elsewhere, to stars and starters who were more widely known to fans and consumers.

On their Zoom screens, Griffin and his father exchanged knowing looks. This guy didn’t get it.

“We basically were saying to each other, ‘OK, he’s not the guy for us,’ ” Will Griffin remembered, “because if you spend time with Chase and the first thing that comes to your mind is ‘backup quarterback,’ you missed it. He’s just marketable.”

For proof, check his résumé. Degree, Shell, Boost Mobile, UniWorld, DUFFL, Clearcover and Discord have all signed NIL deals with Griffin, making him one of the breakout stars of this emerging landscape.

Just how many deals has Griffin piled up in the five months since college athletes have been allowed to profit off their own unique qualities?

Others are keeping tabs, including the former UCLA basketball star whose lawsuit against the NCAA paved the way for NIL cash to flow from one coast to the other.

Nobody seems to care that he’s a third-string quarterback. Griffin may not have thrown a pass this season, but he has done plenty of pitching thanks to an authentic brand: He’s Chase Griffin, UCLA quarterback, with his own story to tell.

“I’m frequently the smallest person on the football field, but I always strive to be the most impactful,” the redshirt sophomore says in a video for Degree’s Breaking Limits Team. “All my life, I’ve overcome other people’s narratives of what I can do — narratives that are just words, but in reality, the game of football and the game of life are about impact.”

Degree’s theme is a perfect fit for its new pitchman. Told he would never make the varsity team because of his 5-foot-10 stature, Griffin became Gatorade’s Texas high school football player of the year. Passed over by almost every major college team, he earned a scholarship to UCLA and graduated with a bachelor’s degree in public affairs in just over two years while winning his only start at the Rose Bowl.

Those were the stories that sold Degree on a partnership with the undersized overachiever.

“It’s like everyone was putting ceilings on him,” said Rob Master, vice president of media and marketing at Unilever, Degree’s parent company, “and at every turn we were so impressed with how he embraced this concept of breaking limits in every aspect of his life.”

Subsequent deals with Shell and Clearcover car insurance rolled in based on the strong references Griffin received for his work with Degree. For Shell, Griffin drove to several different stations in his father’s rental car to get the video footage he wanted.

“If they ask for one thing, he’s going to give them four,” Will Griffin said. “He’s going to overdo it; that’s just the nature of his personality.”

Another selling point is Griffin’s high level of engagement with his 27,700 followers on Instagram and 12,200 followers on Twitter. According to metrics compiled by Opendorse, an online platform that connects companies with athletes seeking NIL deals, Griffin’s 92,784 Instagram engagements — likes and comments — over the last year are more than five times those of the average UCLA athlete.

Among the more than 25,000 professional and college athletes tracked by Opendorse, Griffin’s engagement rate of 4.895% dwarfs the 0.765% average.

“Chase is one that stands out above many of his peers in college sports,” said Blake Lawrence, chief executive officer of Opendorse, “because of not necessarily the size of his audience but how engaged his audience is, which means that he’s a great marketer himself, right?”

To snag Griffin as a client, companies must fulfill his three criteria — their message must align with his personal values, and the deal must make financial sense while helping him give back to the community.

“That’s going to weed out a whole bunch of things,” said Will Griffin, who helps his son vet the deals he is interested in pursuing. “Hopefully he didn’t turn down the next Google already.”

The community component of Chase Griffin’s deals is especially meaningful because he has helped feed hungry students by donating a portion of his proceeds to the Los Angeles Regional Food Bank’s weekend backpack program. He has raised more than $4,200, providing more than 16,000 meals, and expects that number to double by the end of this year.

Don’t expect him to make this a full-time endeavor. Griffin is capping his time commitment to his NIL deals at three hours per week while he finishes the season and completes graduate school in UCLA’s transformative coaching and leadership program.

“I have not forgotten what I am here to do,” said Griffin, who wants to go into venture capital and private equity once his playing days are over. “I love UCLA football, I love playing quarterback, and I’m here to do that.”

As long as he can remember, Griffin has wanted to play for the Bruins. Born at UCLA Santa Monica Medical Center, he spent several early childhood years in Los Angeles, attending pre-kindergarten at Horace Mann Elementary School in Beverly Hills.

His family moved to Texas when he was about to turn 5 years old, not wanting their children to grow up in L.A., but Griffin always wanted to come back. He was a regular at UCLA’s football camps and was thrilled when the coaching staff offered a scholarship two days before he was scheduled to visit Harvard.

After not playing as a freshman, he moved into a prominent role last season when starting quarterback Dorian Thompson-Robinson missed two games while stuck in COVID-19 contact tracing. Griffin nearly led the Bruins to an upset of eventual Pac-12 champion Oregon before helping them beat Arizona in his first home start.

When Thompson-Robinson departed the season finale against Stanford because of an injury, Griffin came off the bench to throw for four touchdowns. The arrival of highly coveted transfer Ethan Garbers before this season moved Griffin into a third-string role, but it has not diminished his standing on the team.

“If you want to buy stock in a human being, buy stock in Chase Griffin because he’s just starting taking off,” coach Chip Kelly said. “That kid is a really special person.”

Those awards made Griffin the face of his high school town while sharpening his media skills through more than 100 interviews. His speaking prowess was on display last month when he became the first college athlete to speak at Advertising Week in New York through a pre-taped video.

“In my mind, the NIL opportunity is limitless,” Griffin says in the video. “For the first time ever, we can partner with brands to combine the drive, discipline and focus that got us to this point and create a new, equitable and purpose-driven future.”

His expertise is in demand. UniWorld, the longest-standing multicultural advertising and marketing agency in the country, has tabbed Griffin as its student-athlete executive in residence, making him its chief NIL strategist as part of its efforts to help Black athletes monetize their platforms.

Griffin’s teammates like to tease him about his deals, shouting, “Hey, Degree man, give me some deodorant!”

“It’s out of good fun, and the main thing is that a rising tide lifts all boats,” Griffin said. “Each week, I’m going to contribute to the team however way I can for us to win the game, and I think that brings more deals, more opportunities for everyone involved.”

Doing so allows the backup to move front and center once again.