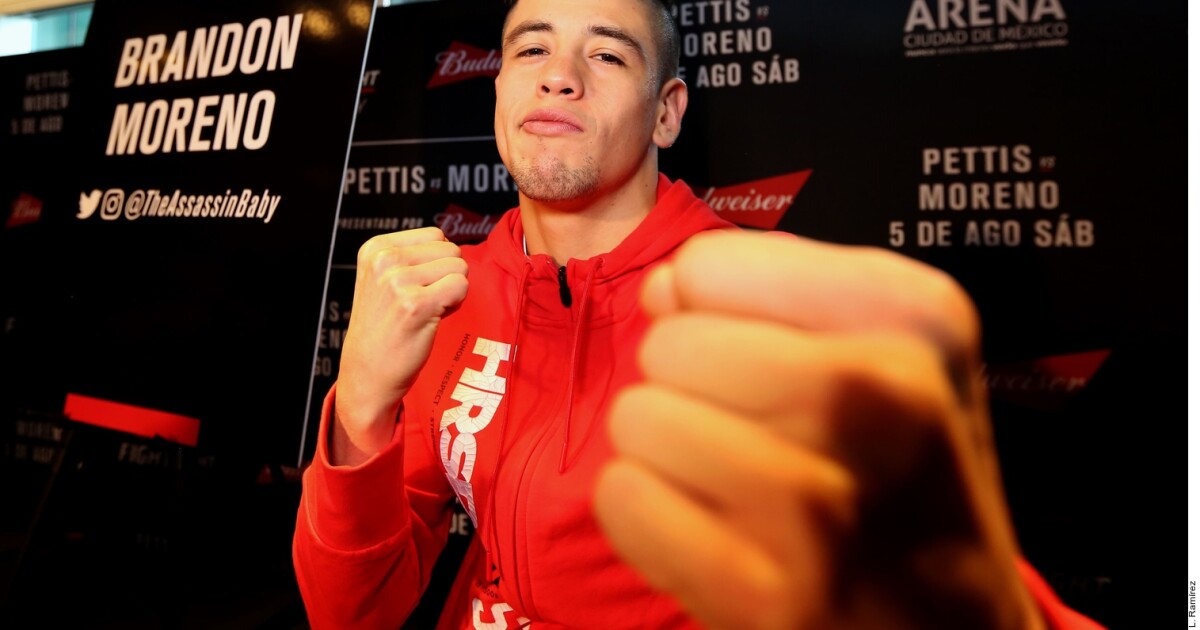 Which Parisian pugilist will emerge as the undisputed heavyweight champion when Francis Ngannou takes on fellow Frenchman and interim champion Ciryl Gane?

The tandem of title fights highlights UFC 270 at Honda Center in Anaheim and on ESPN+ pay-per-view Saturday night. This will be the first UFC event in the Southland since UFC 241 on Aug. 17, 2019, when Stipe Miocic knocked out Daniel Cormier to regain the heavyweight championship.

Moreno (19-5-2) will face Figueiredo (20-2-1) in a trilogy fight that could generate the most interest among Southland viewers because of Moreno’s popularity.

Moreno, Mexico’s first UFC champion, will fight Figueiredo for the third consecutive time. They fought to a majority draw in 2020 in a fight-of-the-year contender, and in June, Moreno made sure there was no debate when he choked out Figueiredo to win the title.

Moreno has revived his career after an uneven run from 2016 to 2019 resulted in his release from the UFC. After winning a title in a different promotion in his lone fight outside UFC, Moreno made it back, and hasn’t lost during a 4-0-2 run.

Moreno, whose family runs a piñata business in Mexico that distributes its products throughout Southern California, is looking to lean on his knowledge of Figueiredo to deliver another beating.

“I just want to fight this Saturday, keep the fight with me and be ready for the next one,” Moreno said. “But definitely this part of my life, this trilogy, will be something nice in my legacy.”

The 28-year-old has enjoyed the limelight that has come with his 125-pound title.

During Mexico’s 4-0 soccer win against Nigeria during the summer, the “Assassin Baby” was received warmly by fans at the Coliseum. He also visited boxing star Canelo Alvarez at his San Diego gym to get pointers on fighting and handling fame.

The convivial Moreno smiled from ear-to-ear Thursday during a news conference, making heart shapes with his hands and swinging wisecracks at the irritated Figueiredo. The partisan crowd cheered for Moreno and booed the Brazilian.

Moreno made fart noises into the microphone and offered a retort while his team blared music through a boombox.

Moreno sang a more serious tune away from the made-for-TV gathering.

“I feel like the biggest ability of Figueiredo is he’s big, he punches hard, and he’s very intimidating,” he said. “He tries to intimidate all his opponents in the octagon. So I’m expecting the same wild fighter, but a little smarter at the same time.”

The headline event should also be entertaining. The hard-hitting Ngannou — who knocked out Miocic in just two rounds in March to win the crown — will face undefeated upstart and tour de force Gane, his former sparring partner now trained by Fernand Lopez, who molded the raw French-Cameroonian Ngannou into the powerhouse he is today before separating.

The once-homeless 35-year-old Ngannou (16-3), the first African-born champion in UFC history, is coming into the fight facing a career crossroads.

The 6-foot-4, 257-pound fighter is contemplating a part-time crossover into boxing and calling for a fight with WBC heavyweight champion Tyson Fury. All of Ngannou’s MMA wins have come via stoppage, and he’s looking to cash in on his power because Saturday will be the last fight on his UFC contract.

Should Ngannou beat Gane, the UFC could tap into a champion’s clause and extend his deal. If Ngannou loses, the UFC could match any rival offer inside a 90-day window.

However, negotiations around a new deal have been so futile over the last year that UFC president Dana White instead opted to stage an interim title fight in August featuring Gane and Derrick Lewis. Gane (10-0) dominated the veteran Lewis, scoring a third-round technical knockout.

Ngannou is riding a five-fight winning streak, all via knockout, with wins over Curtis Blaydes, Cain Velasquez, Junior dos Santos, Jairzinho Rozenstruik and Miocic since 2018.

“My prediction is a knockout in two rounds,” Ngannou said of the fight with Gane.

The 31-year-old, technically adept Gane is a slight betting favorite heading into the fight. Gane has enjoyed a meteoric rise since joining UFC in 2019 after turning pro in 2018. His last four wins have come against credible contenders Lewis, Dos Santos, Rozenstruik and Alexander Volkov.

“I’m mentally ready. I’m comfortable. I’m confident,” Gane said. “I’m more technical than him, and I have power also. Francis is one of the biggest and strongest guys in this division. So that’s why it was a lucky chance to [spar] him a few years ago. It helped me for my career to feel what power is.”