Beckham’s time with Browns in doubt after video firestorm 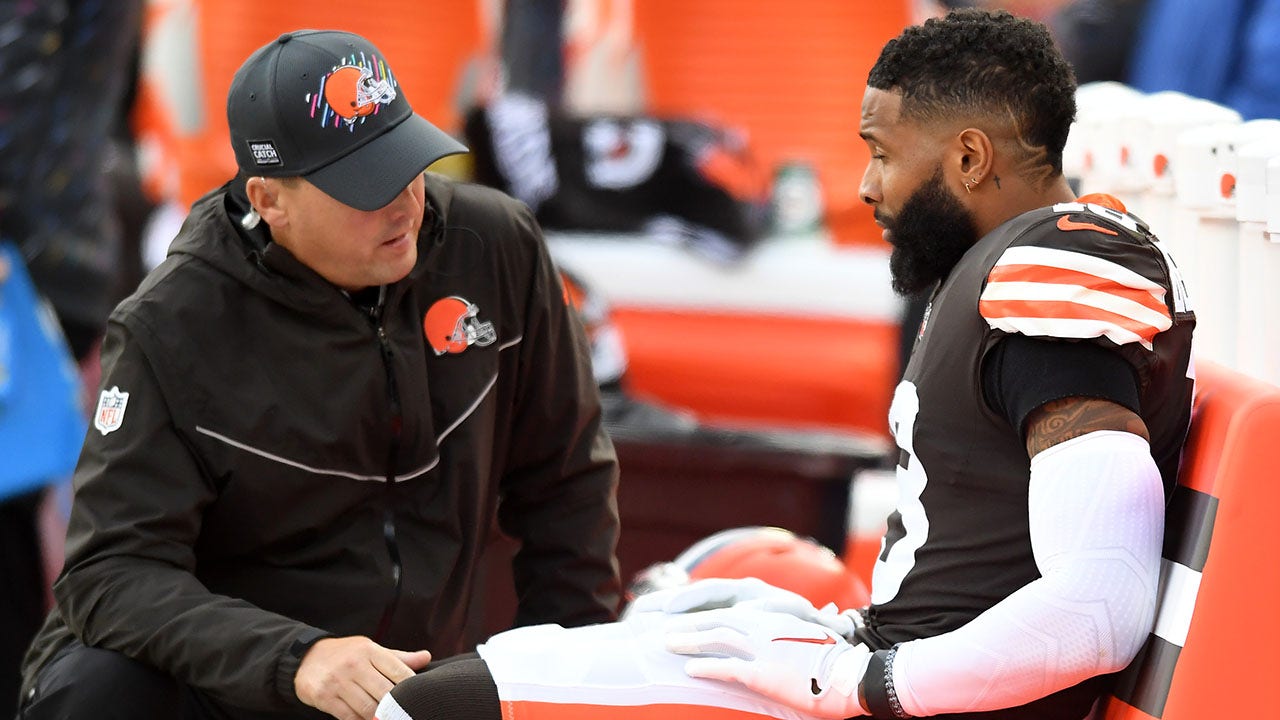 Odell Beckham Jr.’s father is upset with Browns quarterback Baker Mayfield for not throwing the ball to his wide-open son.

Beckham was excused from practice on Wednesday by the Browns, who are now deciding whether to cut ties with the polarizing wide receiver or see if he and Mayfield can move forward together.

Following Wednesday’s practice, Mayfield said he was surprised — not hurt — by the video, which has caused a rift with the team and could lead to the receiver’s release.

And while the Browns may have already decided Beckham’s fate, Mayfield hasn’t ruled out a reconciliation.

“I thought we had a very open line of communication going into it, so we’ll see,” Mayfield said when asked if his relationship with Beckham can be fixed. “I was more surprised than anything (by the video) — as everybody was. We’ll see going forward.

“There’s always room for improvement in any relationship, so we’ll see.”

Mayfield was asked if he could forgive Beckham.

“Yeah,” he said. “I think any sort of conversation could go a long way.”

While it appears Beckham’s release is inevitable, the Browns are weighing other options in the short term, including sitting him for the rest of the season much as Houston is doing with quarterback Deshaun Watson.

Mayfield has not spoken with Beckham, but seemed willing to patch things up.

“I’m prepared to do whatever, and if he’s back, then we’ll work through it and do whatever it takes,” he said. “I can put my ego and pride to the side to win, because that’s all I care about is winning.

Mayfield said he didn’t take the video too personally, and can appreciate the elder Beckham looking out for his son.

“Obviously, naturally, he wants his son to succeed,” Mayfield said. “I can’t blame him for that. I want Odell to succeed. That’s where we were at, and at least I thought.”

Before practice, coach Kevin Stefanski said Browns general manager Andrew Berry was in talks with Beckham’s representatives about his future. Stefanski gave blanket answers to questions ranging from whether Beckham would be waived or given another chance.

Like Mayfield, Stefanski has not talked to Beckham, another sign of a major divide between the Browns and a controversial player with a history of being a distraction.

It’s likely the Browns (4-4) are preparing to move on without the 28-year-old, who is under contract for two more seasons but is not guaranteed any money after 2021.

The timing is hardly ideal for the Browns, who are in last place in the AFC North and visit the Cincinnati Bengals (5-3) this week.

On Tuesday, Odell Beckham Sr. shared an 11-minute video on Instagram titled: “Odell Beckham is Always Open for the Cleveland Browns in 2021” with a montage of plays showing Beckham uncovered and not targeted.

Mayfield conceded there have been times when he could have done a better job of getting the ball to Beckham.

However, he disputed the notion he was intentionally ignoring Beckham.

“That’s,” Mayfield said before a long pause. “Deliberately not throwing the ball to an extremely talented player that I did a lot of work with, that’s an opinionated statement. I’ll say that.”

Their lack of a connection has been an ongoing issue since Beckham arrived in a blockbuster 2019 trade from the New York Giants.

Compounding their lack of chemistry, Mayfield played better and led the Browns to the playoffs in 2020 — ending a nearly two-decade drought — after Beckham suffered a season-ending knee injury.

Despite their on-field issues, Mayfield and Beckham have always insisted they get along well. They spent time together during the offseason in Texas, and vacationed together in Montana shortly before the season started.

Mayfield was asked how the relationship got to this fragile point.

“I can’t exactly give you the full answer as to why,” he said. “But I’m here now and I’ve got to be the leader for these guys and we’ll see where the situation goes. I’ve got to do my job, lead. This is a bump in the road of adversity and have to handle it and roll with the punches.”

Mayfield only threw two passes toward Beckham in Sunday’s 15-10 loss to the Pittsburgh Steelers. He had just one catch for 6 yards, and his other target was a high incompletion in the fourth quarter.

Since returning from a torn anterior cruciate ligament, Beckham has 17 catches for 232 yards and no touchdowns this season. He’s also been playing with a sprained right shoulder that he hurt against Arizona on Oct. 17.