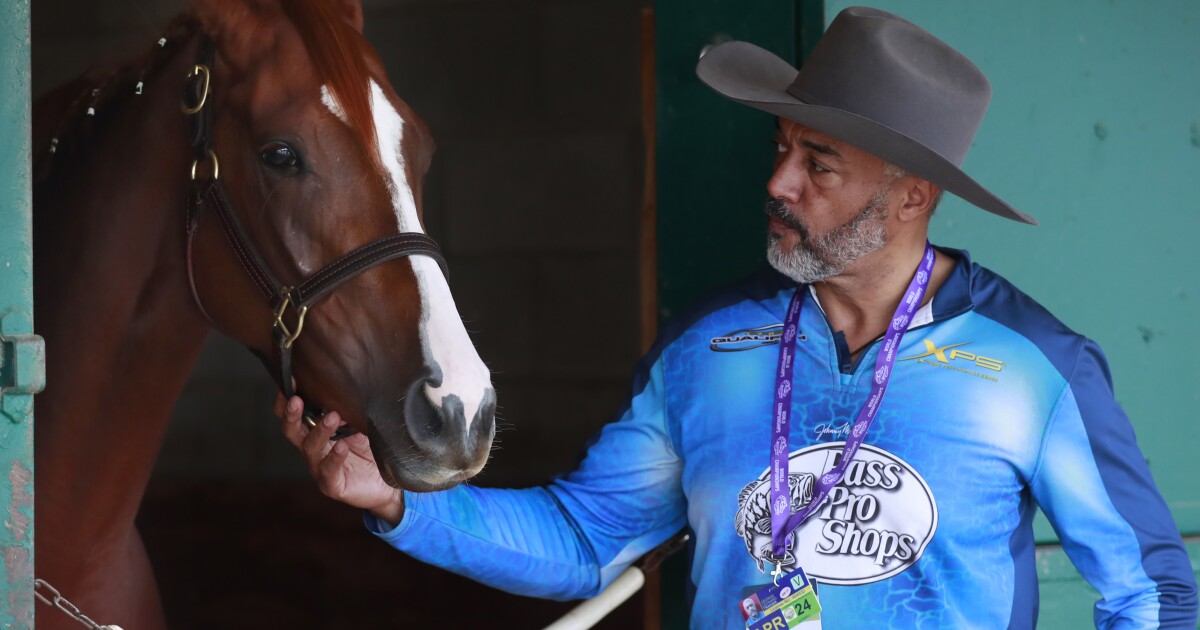 George Leonard III is not your typical horse trainer at the Breeders’ Cup.

He picks up a hose and washes down his horse, mucks his own stall, spreads fresh bedding, while the rest of his team, his wife, walks their 2-year-old filly around the shedrow.

The Breeders’ Cup is about big rollers, high-priced horses and big breeding rights, but every once in a while comes along a magical set of circumstances from which movies are made. A lifelong trainer of cheap claimers buys a horse for $5,500, wins his first graded stakes race at 18-1 and gets an all-expenses paid trip to racing’s biggest stage.

And Leonard is more than one of a kind in another way. He’s the first American-born Black trainer to enter a horse in the Breeders’ Cup in the 37-year history of the event.

“I’m not a trailblazer,” the 55-year-old Leonard said. “I’d rather be a role model … and be known more for my hard work than my nationality. It shows that anybody, through hard work, can get lucky and make it.”

Among the runners Friday is California Angel, who will be in the $1 million Juvenile Fillies Turf. She will start in the 14th post in the 14-horse race.

The filly is owned by Chris Walsh, who has a small breeding operation in Indiana with nine horses, four of them running. When California Angel won the Jessamine at Keeneland and qualified for the Breeders’ Cup, it was also her first graded stakes win.

Leonard’s barn at Indiana Grand has only 19 horses, so the combination of small trainer and a small owner seemed just about perfect.

“George had one of our homebreds last year and he was injured and we decided to retire him,” Walsh said. “We hated that we didn’t have a horse with George so we talked about the Ocala (Fla.) sale. We asked if he would mind buying us something.

California Chrome had a similar humble start but went on to win the Kentucky Derby and Preakness and was twice named horse of year, winning almost $15 million.

“[California Angel] just looked real good,” Leonard said. “When you have that kind of money, you have to look for a bargain.”

It wasn’t long before Leonard knew he had more than a bargain.

“Her first couple works were awesome, although I first thought that the horses I was working her with weren’t that good,” Leonard said. “By the third work I knew I had something special.”

“I’m not a trailblazer. I’d rather be a role model … and be known more for my hard work than my nationality.”

California Angel won her first race at Kentucky Downs. Her second race was on the dirt at Churchill Downs and she finished third.

“After she broke her maiden, we started talking about running [in the Jessamine],” Leonard said. “But it was a far distant reality that might end up being true.”

It happened in dramatic fashion as California Angel came from eighth at the top of the stretch to win by a head.

“We politely declined,” Walsh said. “It’s not about the money. If it were, we would have sold her for sure. It’s about the opportunity for us to enjoy and for George to enjoy. How could I possibly sell the horse from underneath the man who found her. If we had sold, it’s certain she would be moved to a new trainer.”

The fact that Leonard is the first Black trainer in the almost four decades of the Breeders’ Cup is shocking given that the sport was built by Black jockeys and trainers. In 1875, in the first Kentucky Derby, 13 of the 15 jockeys were Black. In the first 28 runnings, Black jockeys won 15 times.

“Black men in this industry were very prominent at the top level … but that abruptly stopped in the 1890s after 30 years of emancipation,” said Katherine Mooney, a history professor at Florida State University who wrote the book, “Race Horse Men: How Slavery and Freedom Were Made at the Racetrack.”

It’s not coincidental that things changed in 1896 when the Supreme Court ruled in Plessy vs. Ferguson and allowed state segregation laws.

“The race track is a very small world and you could immediately see a sea change,” Mooney said. “Whites said, ‘Freedom, yes, but equality, no.’ … You can see it from magazines from that time. The names started to disappear and the pictures disappeared. It was a quick shift. Racing became the athletic face of segregation.”

Leonard was born into racing as his father was also a trainer, but at small tracks in Louisiana such as Delta Downs and Evangeline Downs. Leonard identifies himself as Creole, which is generally considered a combination of French, Black and Native American.

While the Leonards were able to keep the racing business going, it doesn’t always work out that way.

“It was almost like coaching trees,” Mooney said. “Older men mentored younger men. And you could work your way up in the business. But if you cut off the supply at the bottom, you don’t get people and the pipeline gets cut off. Most places it stopped being a thing that kids from Black communities know it’s a job you can do.”

“The fact these stories have come together during one of the two times of the year when non-racing fans pay attention might indicate a change,” Mooney said. “It might suggest to people that it’s not just one guy but a whole group of people who have not been recognized and it could be significant.”

Oscar Gonzales, vice chairman of the California Horse Racing Board, agrees this could be a turning point.

“It’s not about the money, if it were we would have sold her for sure. It’s about the opportunity for us to enjoy and for George to enjoy.”

“What the industry needs most, in addition to an expanded fan base, are stories that inspire both outside and inside the business,” Gonzales said. “I look at a guy like George, a great horseman, and his story lifts people up. It can bring fans, investment and overall support. Still, horse racing has its share of work ahead of us to be on a par with how other industries are doing to bring in diverse leaders.”

As for Leonard, he underplays the idea that he could be at the ground floor of change.

He might have no choice but to get one if California Angel wins Friday.