Youngkin has commanding lead in Virginia as counting continues 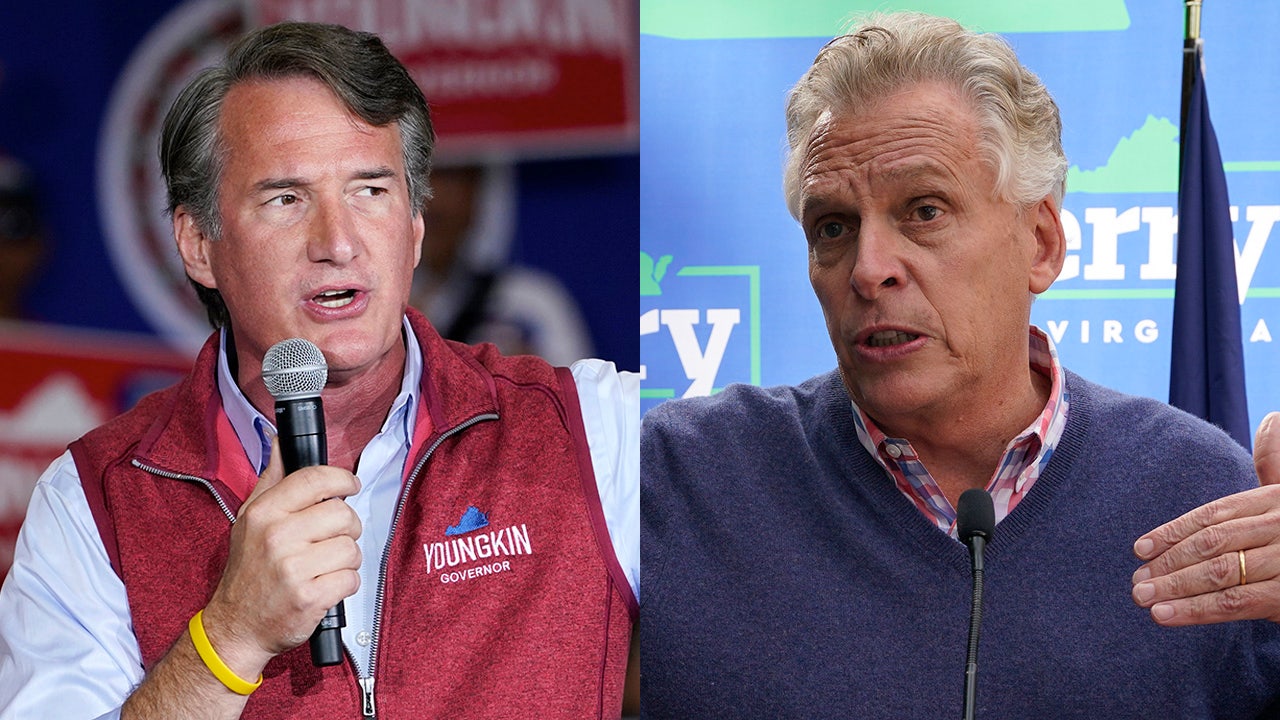 As votes continue to come in, Republican Glenn Youngkin now has a commanding lead in the Virginia gubernatorial race over former Democratic Gov. Terry McAuliffe. He has maintained his edge in the statewide Election Day vote and in key rural counties.

Nevertheless, there is still a significant amount of outstanding vote in highly populated counties. The Fox News Decision Desk is not yet ready to make a projection.

Two months ago, McAuliffe was expected to handily win the contest in a state that President Biden won by 10 points, but Youngkin has gained momentum in recent weeks.

We are reviewing Virginia results with our Fox News Voter Analysis, and we’ll update you as learn more. We are also watching results in New Jersey. That contest, between Democrat Phil Murphy and Republican Jack Ciattarelli, has also tightened in the last month.

McAuliffe addressed supporters shortly after 10 pm ET, telling them “we’ve still got a lot of votes to count….we’re going to continue to count the votes because every single Virginian deserves to have their vote counted.”

The state’s closely watched gubernatorial showdown is a key bellwether ahead of next year’s midterms elections, has drawn national attention.

“I’ve just felt this great surge of momentum for the last six to eight weeks,” Republican nominee Glenn Youngkin emphasized at a polling station in Chantilly, Virginia on Election Day.

The first-time candidate and former private equity CEO, riding a wave of Republican voter enthusiasm and tapping into the anger of parents over decisions by their local school boards, erased a single digit lead that former Democratic Gov. Terry McAuliffe held just two months ago. Nearly all of the final public opinion surveys indicated deadlocked race in the commonwealth, where the GOP hasn’t won statewide in a dozen years.

“This election is about the direction of our Commonwealth and the nation. Don’t sit this one out. VOTE,” McAuliffe urged on Twitter on Tuesday.

The former governor has been battling complacency among Democratic voters who may be demoralized by President Biden‘s flagging poll numbers, and frustrated with the current lack of progress by the president and congressional Democrats on their social spending and human infrastructure measure and other top priorities.

Virginia and New Jersey are the only two states to hold gubernatorial races in the year after a presidential election, guaranteeing they both grab outsized attention. And both states have a tradition of voting against the gubernatorial nominee of the party that won the White House the previous year. And Virginia, a one-time general election battleground that’s still very competitive between the two major parties, is seen as a key barometer for the 2022 midterms, when the Democrats will be defending their razor thin majorities in the House of Representatives and Senate.

Biden carried Virginia by 10 points over then-President Donald Trump in last year’s election. And while neither the president nor the former president are on the ballot, Biden and Trump have been front and center in the race.

A defeat in Virginia in the first major election during Biden’s tenure in the White House would serve as a major political setback for a president who’s already endured a very rocky late summer and autumn.

WHAT YOU NEED TO KNOW ABOUT GLENN YOUNGKIN

McAuliffe, hoping to fire up Democrats, has brought in his party’s biggest stars to join him on the campaign trail, from Biden to former President Barack Obama, Vice President Kamala Harris, and other top politicians. And the former governor hasn’t wasted an opportunity at his events, in his interviews, and in his campaign’s statements and ads to link Youngkin to Trump, who’s endorsed the GOP nominee.

The strategy is simple – during his years in the White House Trump was a lightning rod that ignited Democratic turnout. McAuliffe’s hoping for a repeat performance in a state where polls indicate the former president remains very unpopular with Democrats and independent voters. While careful not to turn off Trump’s base of voters, Youngkin’s kept the former president at an arm’s length during the general election campaign, and didn’t take part in a Trump tele rally on the candidate’s behalf on Election Eve.

WHAT YOU NEED TO KNOW ABOUT TERRY MCAULIFFE

Above average turnout was reported on Tuesday in various polling precincts across the commonwealth. And nearly 1.15 million people – slightly more than a fifth of all registered voters – handed in ballots during the state’s early voting period, which concluded on Saturday.

Voters wait in line to check in to vote at a school in Midlothian, Va., Tuesday, Nov. 2, 2021. Voters are deciding between Democrat Terry McAuliffe and Republican Glenn Youngkin for Governor. (AP Photo/Steve Helber)
(AP )

The number of early ballots cast at this point far exceeds the total from four years ago during the state’s previous gubernatorial election. But that’s not a fair comparison as prior to 2020, early voting in the state lasted for seven days and required an excuse to cast a ballot ahead of Election Day. Last year, due to potential in-person voting health concerns amid the coronavirus pandemic, Gov. Ralph Northam, a Democrat, and the Democratic-controlled state legislature moved to expand early voting to 45 days and removed the excuse requirement.

In a switch from previous elections in Virginia, early in-person and absentee ballots that have already been received and processed are being reported first, with Election Day ballots to follow. McAuliffe likely held a solid advantage over Youngkin in early voting. The question of whether Youngkin could close the gap on Election Day will soon be answered.

As Youngkin caught up with McAuliffe in public opinion polling this autumn, helping to fuel his surge was the combustible issue of education and schools.

“I’m on the side of the parents and children and teaches, and I think this has become the big issue in this race,” Youngkin stressed Tuesday on Fox News “America’s Newsroom.”

Public school education has traditionally been a leading issue in gubernatorial contests across the country. But amid a year and a half of frustration over school closures and mask mandates due to the coronavirus pandemic and the push by conservatives nationwide to target race-focused curriculum, including this year’s well publicized battles in Virginia’s Loudon County over critical race theory – which isn’t taught in the state’s public schools – Republicans now see education and parents’ rights as a winning issue to try and recapture suburban voters who fled the GOP during Trump’s White House tenure.

An unforced error by McAuliffe further fueled the GOP fire, as Republicans spotlighted a clip from the second and final debate between the two candidates where the former governor said “I don’t think parents should be telling schools what they should teach.”

In the weeks after the clip went viral, polls in Virginia showed education surging to become the second most pressing issue on the minds of voters. And the same surveys indicated that McAuliffe, who kicked off his gubernatorial campaign at a public school in Richmond as he spotlighted his education proposals, had lost his advantage on the issue.

If Youngkin wins, expect his push to stand up for parents to be a blueprint for the GOP as the party aims to win back both houses of Congress in next year’s midterms.

While it’s dangerous to read too much into the results in Virginia, the state has a history of voting against the gubernatorial nominee of the party that captured the White House the preceding year. McAuliffe broke that streak in 2013, when he won his first term as governor the year after Obama was reelected as president. Virginia state law prevents governors from serving consecutive terms.

McAuliffe’s 2013 gubernatorial victory didn’t foreshadow the GOP’s red wave in the 2014 midterms, when they recaptured the Senate. But former Republican Gov. Bob McDonnell’s 2009 victory in Virginia – a year after Obama captured the White House – did precede the GOP tidal wave of 2010, when the party retook the House. And Democratic Gov. Ralph Northam’s victory in 2017 – a year after Trump won the presidency, teed up the Democrats’ blue wave in the 2018 midterms, when the convincingly won back the House majority.