Will the Real G.O.P. Please Stand Up? A National Power Struggle Goes Local. 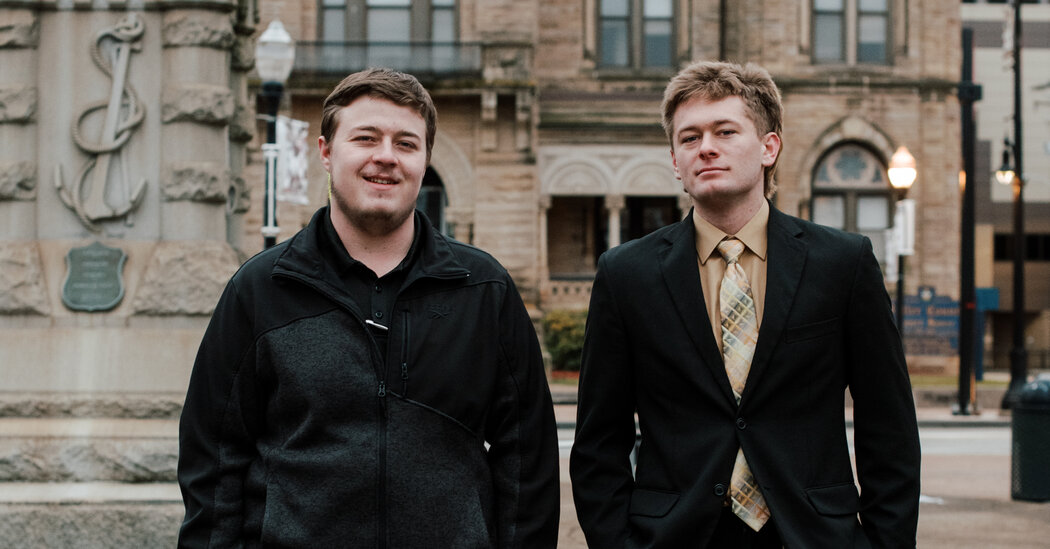 BUTLER, Pa. — Zach Scherer, a 20-year-old car salesman and Republican activist in Pennsylvania’s Butler County, decided to run for a seat on the county commission this year — a move that ordinarily would mean seeking the endorsement of local Republican Party leaders.

In Butler County, this raised an unusual question: Which Republican Party?

Last spring, the officially recognized Butler County Republican Committee was divided by a right-wing grass-roots insurgency, then divided again by a power struggle among the insurgents. There have been a lawsuit, an intervention by the state Republican Party and a dispute over a booth at the local farm show.

Butler, a rural county in western Pennsylvania where Donald J. Trump won nearly twice as many votes as Joseph R. Biden Jr. in 2020, now has three organizations claiming to be the true tribune of local Republicans. All of them consider the others illegitimate.

“There is, in effect, no committee,” said Al Lindsay, a four-decade veteran of the local party, who was ousted as committee chairman last year.

The partisans in Pennsylvania agree about one thing, if not much else: Their fight is a microcosm of the national struggle for control over the Republican Party, one that began with Mr. Trump but has been inflamed by the party’s weak showing in the midterm elections.

That struggle has played out in national arenas like Kevin McCarthy’s days-long fight to win the speakership of the U.S. House of Representatives, and in a contentious race for the chair of the Republican National Committee ahead of this week’s meeting.

But it is being fought just as intensely at state and county levels, as Trump loyalists and right-wing activists who took control of party organizations in recent years face resistance from rivals who blame them for the party’s losses in November.

Such conflicts often occur below the radar of even local news outlets. But they are likely to shape state parties’ abilities to raise money, recruit candidates, settle on a 2024 presidential nominee and generally chart a path out of the party’s post-Trump presidency malaise.

“We believe that the way we’re going to change our national scene is by changing our local committees,” said Bill Halle, the leader of one of the two insurgent factions within the Butler party.

Politics Across the United States

From the halls of government to the campaign trail, here’s a look at the political landscape in America.

The current rifts date most directly to Mr. Trump’s loss in 2020, when his relentless claims of a stolen election divided Republican leaders between those who took up Mr. Trump’s cause and those who wanted to move on.

In several closely contested states, state party leaders loudly supported his election claims, and backed the Republican candidates who earned Mr. Trump’s endorsements by doing the same. But many of those candidates were extreme or erratic politicians who would go on to lose in November, and their nominations have caused enduring divisions. .

In Michigan, major G.O.P. donors pulled back after the state party co-chair, Meshawn Maddock, took the unusual step of openly supporting election deniers favored by Mr. Trump ahead of the party’s nominating convention. Those candidates all lost in a statewide G.O.P. rout in November.

In Georgia, Brian Kemp, the Republican governor seeking re-election, went so far as to build his own political organization separate from the state Republican Party, whose chairman, David Shafer, backed Trump-endorsed Republican primary candidates. Mr. Shafer is among the targets of a special grand jury investigating whether Mr. Trump and his allies interfered in the 2020 election.

“I think it’s unforgivable,” Jay Morgan, the Georgia party’s executive director in the 1980s, said of Mr. Shafer’s handling of the party. Mr. Morgan, who is now a lobbyist in Atlanta, said he has not recommended that any of his corporate clients donate to the state party. “It breaks my heart,” he said.

Mr. Shafer did not respond to a request for comment.

In Nevada, multiple former officials in the state party have called on its current chair, Michael McDonald, to resign after the party backed several losing election-denying candidates.

“The Republican Party could be great here; it really could,” said Amy Tarkanian, the former chairwoman of the Nevada G.O.P., who was expelled from her county Republican committee after endorsing the Democratic attorney general candidate last summer. “But they made themselves irrelevant with their toxicity.”

Republican officials with state parties in Michigan, Georgia and Nevada did not respond to requests for comment.

In the days after the 2020 election, influential Trump allies like Stephen K. Bannon, who hosts the popular “War Room” podcast, promoted the “precinct strategy”: a Tea Party-era blueprint for taking over local party committees by running activists for the low-level posts that often go unfilled.

County committees typically have a say in state party affairs, endorse and campaign for local candidates and sometimes appoint election workers. The precinct strategy aimed to use the committees to wrest control from longtime party leaders whom right-wing activists considered to be weak or dismissive of their ambitions.

“What the establishment has said for years is, ‘I may not be what you want, but I’m not a Democrat, so you have to support me.’ That ends up being an excuse for ignoring the base,” said Sam Faddis, the leader of a statewide coalition of self-described “patriot” groups in Pennsylvania. A former C.I.A. operations officer, Mr. Faddis has appeared often on Mr. Bannon’s podcast.

In Butler County, a largely blue-collar region of farmland and aging steel mills north of Pittsburgh, the cause was taken up by Mr. Scherer, who voted for the first time as a high school senior in 2020. Incensed by what he believed to have been a stolen election, he formed a group called the Butler PA Patriots, which soon found its place in Mr. Faddis’s statewide coalition.

After watching videos of Mr. Bannon advocating the precinct strategy, he began recruiting local candidates. “I told them what we wanted to do,” he said, “which was take over the Republican Party.”

His group scouted potential candidates by identifying “super voters” — registered Republicans who had voted in two consecutive elections — and canvassing personal networks on Facebook and Telegram. Corey Check, a 20-year-old member of the Patriot group who ran for committeeman in his township, said he recruited one candidate for committeewoman after noticing a cardboard cutout of Mr. Trump in front of her house and knocking on the door.

Mr. Scherer’s Patriot group made common cause with Mr. Halle, a born-again evangelical pastor, who had recently clashed with Mr. Lindsay and other local committee leaders.

Both Mr. Halle and Mr. Lindsay agree that their disputes were less over ideology than what the party apparatus was best used for. Mr. Halle saw it as a vehicle for remaking a state party whose compromises on Covid quarantines, mail-in voting and responses to 2020 election fraud claims he considered unacceptable. Mr. Lindsay — who describes himself as strongly anti-abortion and favored investigating the 2020 election outcome in Butler County — saw it chiefly as a vehicle for electing Republicans.

“Our opponents were Democrats — or that’s what we thought,” Mr. Lindsay said. “These people were not interested in that. They were interested in attacking Republicans.”

Led by Mr. Lindsay, the county committee sued to block Mr. Halle, Mr. Scherer and others from incorporating their own organization under a similar name. In the spring primary, the insurgents won a majority of the committee seats in the county, but months of convoluted procedural fighting and legal wrangling followed.

Matters came to a head in August, when members of the old and new guards tussled over the committee’s booth at the Butler Farm Show, prompting the event’s head of security to intervene — an episode that, mortifyingly for the Republican activists, took place in view of the county Democrats’ own booth.

Later that month, the state party stepped in and recognized Gary Vanasdale, a local lawyer backed by Mr. Halle’s group, as the rightful county chair. But the insurgency splintered quickly after its victory. Mr. Halle has continued to operate the corporation as a kind of shadow party, accusing Mr. Vanasdale of “fraudulently using our name” and demanding that he turn over the party’s assets.

Meanwhile, the United Republicans of Butler County, a third group consisting of longtime party members, including Mr. Lindsay, has emerged, too, and earned the backing of some Republican officials in the county.

Jondavid Longo, the mayor of the town of Slippery Rock and a Republican committeeman, said in an email that that group was “trusted by legitimate candidates and leaders to get the work done and deliver tangible results for the Republican Party.”

Mr. Vanasdale said he welcomed the other groups’ energies, but was quick to note that only his committee was formally recognized by the state party.

“There’s only one N.F.L.,” Mr. Vanasdale, a youth football coach, said. “There’s a bunch of other leagues that want to compete with that. They’re all advancing football. I’m fine with that.”

Some have pleaded for unity. “WE ARE ALL REPUBLICANS,” Mr. Scherer wrote in an email to members of the two insurgent factions in September, on the eve of the midterms, “and it is time to work together to fight the RINO” — Republicans in name only — “establishment and the liberals running our country, and state.”

But others on the right view the current turmoil as a rocky but necessary phase in the Republican Party’s transformation. They blame the state party’s and donors’ tepid support for the losses of the party’s more right-wing candidates in November. (The Pennsylvania Republican Party declined to comment.)

“The establishment in Pennsylvania is not shy,” Mr. Faddis said. “Look at what they did with Mastriano.” Doug Mastriano, a champion of the state’s right wing, won the Republican primary for governor last year but lost badly in the general election to the Democrat, Josh Shapiro.

Mr. Faddis said his coalition was educating activists in more counties across Pennsylvania on the precinct strategy in order to build on last year’s local victories. “We are absolutely trying to get all of the groups in the state pushing in the same direction,” he said.